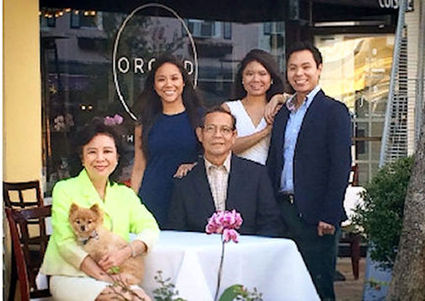 (Seated l,r), Sue and Lucky Manatad with their three children standing behind them.

The Orlando Chapter of Hadassah in conjunction with Chef and Restauranteur Sue Manatad presents a cooking demonstration of healthy Thai recipes on Tuesday, Jan. 3, 2017, at Congregation of Reform Judaism (CRJ) at 11:30 a.m. The demonstration will be followed by a lunch of vegetarian Thai food prepared by Chef Manatad and supplemented with dairy items from Bagel King.

Chef Manatad is the proprietor of Orchid Thai Cuisine on Park Avenue in Winter Park. She was born and raised in Bangkok, Thailand, and is the oldest of six children. Her passion for cooking began at a very early age, influenced by her mother. Despite the various help and cooks available in the household, her mother truly enjoyed cooking. To this day, if you ever find yourself in her presence, there will no doubt be at least seven dishes sitting in between you and her as she welcomes you into her house.

Manatad grew up learning old-world cooking techniques from her mother. She learned the ins-and-outs of finding the best possible ingredients, depending on season, region, and makers. She takes great pride in finding the freshest ingredients from local farmers.

In her early 20s, Manatad moved to the United States to pursue her master's degree. She soon met Lucky, who would become her husband and business partner. Together, they have three children, Annie, Richard, and Gibby.

Wanting to raise her young family on the flavors that she was accustomed to while growing up, Manatad took her mom's recipes and made them her own.

Because certain ingredients were hard to find, Sue and Lucky grew a garden lush with flavors from their home country. Lemongrass, kaffir limes, papaya all flourish at their home in Winter Park. With this, Manatad began making her own recipes that incorporated flavors and techniques from her homeland.

Lucky encouraged Sue to continue with her passion for cooking when their children were grown. In 2008, Orchid Thai Cuisine opened its door to invite everyone to Manatad 's kitchen. Her children can often be found at Orchid helping out the family business.

Make your reservation early for the Jan. 3rd event. The count must be in to the caterers by

Dec. 27th due to the New Year holiday.

Reservations are a must. No walk-ins please.* Couvert $ 12.