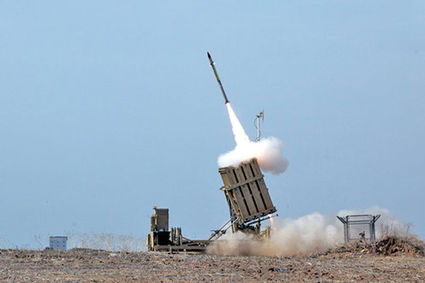 President Barack Obama sprang his much-anticipated "December surprise" on Israel at the United Nations, capping off 2016 with a bang as it relates to the Gregorian calendar year's major events surrounding the Jewish state.

The following are 10 Israel news storylines that defined this past year:

The Obama administration chose to abstain from a Dec. 23 vote on a United Nations Security Council resolution condemning Israeli settlement construction beyond the 1967 lines, rather than exercising its veto power to block the resolution. In allowing the passage of the measure-which demands that Israel "immediately and completely cease all settlement activities in the 'occupied' Palestinian territory, including east Jerusalem"-Obama broke with the longstanding American policy of defending Israel against one-sided resolutions criticizing the Jewish state in the world body. America's U.N. abstention came in the waning days of a tenuous and sometimes hostile eight-year relationship between Obama and Israeli Prime Minister Benjamin Netanyahu.

It wasn't the only jarring U.N. resolution for Israel this year. In October, UNESCO, the U.N.'s cultural body, adopted two resolutions ignoring Jewish and Christian ties to Jerusalem. The measures referred to Jerusalem's Temple Mount exclusively by its Muslim names, Al-Aqsa Mosque/Al-Haram Al-Sharif.

The rise of Trump

The anti-settlement U.N. resolution provided an opportunity for President-elect Donald Trump to prove his pro-Israel credentials. Egypt initially withdrew the resolution under pressure from Trump and Israel, before the measure was put forward again by New Zealand, Malaysia, Venezuela and Senegal.

In November, Trump's election victory over Hillary Clinton ushered in the countdown to a new era in U.S.-Israel relations. Netanyahu and Trump will agree on at least one major issue: opposition to the Iran nuclear deal.

While Trump has enjoyed warm relations with many pro-Israel activists, many American Jews expressed concern over what they described as anti-Semitic undertones that surrounded his campaign, and similar criticism accompanied his appointment of chief strategist Steve Bannon. The Anti-Defamation League (ADL) initially went after the Bannon pick because he "presided over the premier website of the 'alt-right'-a loose-knit group of white nationalists and unabashed anti-Semites and racists," referring to the Breitbart News website. But the ADL later softened its stance, acknowledging, "We are not aware of any anti-Semitic statements made by Bannon."

Reaching out to non-traditional allies

"With President Obama and the left wing of the Democratic Party turning against Israel, Prime Minister Netanyahu has made a great effort to build better relationships with Russia, India, African countries and others," said Dr. Ariel Cohen, director of the Center for Energy, Natural Resources and Geopolitics.

In December, Netanyahu visited Azerbaijan and Kazakhstan, two Muslim-majority nations in Central Asia. He also visited several countries in East Africa during the summer and plans to return to that continent for visits to West African nations.

"What Netanyahu is doing right now is very important, but it should have been done a long time ago. It's overdue," Zvi Mazel, the former Israeli ambassador to Egypt, told JNS.org in July regarding Netanyahu's Africa trip.

In June, Israel and Turkey agreed to normalize diplomatic ties following a six-year rift in their relationship.

The former allies continue to take steps toward a full restoration of ties, including December's exchanging of ambassadors, but their improving relationship may be more of an acknowledgement of regional reality than an expression of mutual admiration. Turkish President Recep Tayyip Erdogan, who once said the actions of the Israeli military constituted "barbarism that surpasses Hitler," did not walk back that remark in an Israeli television interview in November, saying, "I don't approve of what Hitler did, and neither do I approve of what Israel has done."

A tale of two party platforms

U.S. Rep. Keith Ellison (D-Minn.) emerged as and remains a candidate for chairman of the Democratic National Committee. Ellison's bid has been met with significant Jewish opposition-including from some Democrats-due to his vocal congressional support for the Palestinian cause, his urging of increased U.S. pressure on Israel and his past ties with anti-Semitic activist Louis Farrakhan.

The Republican Party, meanwhile, in July reinstated language endorsing an "undivided" Jerusalem into the party's platform, a tone that could be reinforced by the incoming Trump administration's stated intention of moving America's Israeli embassy from Tel Aviv to Jerusalem.

Military and political action at the northern border

Israeli forces killed four fighters from the Islamic State-affiliated Yarmouk Martyrs Brigade in November after the terrorists had fired at Israeli soldiers in the Golan Heights border region. The exchange drew significant attention because it was the first report of an Islamic State attack on Israel from Syria during the nearly six-year-old Syrian civil war.

Earlier in the year, Israel moved to assert its sovereignty over the Golan Heights, a region the Jewish state has controlled for 50 years but which is still considered disputed territory by the international community. In April, in response to the circulation of draft talking points in U.N.-sponsored Syria peace talks that featured a call on Israel to return the Golan to Syria, the Israeli government's ministerial cabinet chose to hold its weekly meeting in the Golan in order to affirm Israel's sovereignty in the area.

All the while, Israel kept a watchful eye on the activity of the Iranian-funded Lebanese terror group Hezbollah, which has been increasing its military presence near the Syrian border with Israel in order to support Syrian President Bashar al-Assad's regime in the civil war. The Israel Defense Forces estimates that about 120,000 Hezbollah rockets are aimed at Israel, but the terror group is still reportedly preoccupied with the conflict in Syria.

The U.S. and Israel made history in September with the signing of the largest-ever military assistance package between the two allies, a 10-year pact granting Israel a total of $38 billion in defense aid.

Yet the aid package did not come without controversy both before and after its approval. In July, the Obama administration said it opposed Congress's proposed "addition of $455 million above the FY 2017 Budget request for Israeli missile defense procurement and cooperative development programs." The Senate Appropriations Committee had recommended an appropriation of more than $600 million for Israeli missile defense in the 2017 fiscal year-$455 million above the Obama administration's request.

September's eventual agreement stated that if Congress increases defense aid above what it guaranteed in the package, Israel must return the extra funds. At a New York event in November, several members of Congress called that stipulation unconstitutional because it would interfere with the ability of Congress to fulfill its mandate as a co-equal branch of the federal government. U.S. Rep. Eliot Engel (D-N.Y.) vowed to "fight every step of the way" to revoke the aid limit.

One year later, the fallout of the nuclear agreement signed in July 2015 between Iran and the P5+1 powers-including the U.S., with the Obama administration brokering the deal-was met with mixed reactions.

"In terms of compliance with the deal itself, I think it is going very well," Dalia Dassa Kaye, director of the Center for Middle East Public Policy at the Rand Corporation, told JNS.org in July 2016. "Basically, the bargain was Iran rolling back of key elements of the nuclear program in exchange for sanctions relief-those two key aspects of the deal have been met."

Ilan Berman-vice president of the American Foreign Policy Council think tank-said that while the deal is "holding for now," the agreement has "not fundamentally changed Iranian behavior," alluding to Iran's continued military buildup, support for terrorist organizations and hostility toward Israel and the U.S.

In August, Iranian state television broadcast live images of Russian-made, highly advance S-300 surface-to-air missiles being transported by trucks to the Fordo nuclear facility south of Tehran. The move by Iran to further fortify one of its most secretive nuclear sites raised doubts about the country's commitment to the nuclear deal.

Also in August, it was revealed that the Obama administration had sent an airplane with $400 million in cash to Iran in January, on the same day that Iran released four American hostages. The money was just one installment of the $1.7 billion settlement-contested since the 1979 Iranian revolution-that Obama agreed to pay Iran under the nuclear deal.

The months-long wave of Palestinian terrorism that began in September 2015 in Israel-commonly known as the "knife intifada" because many of the attacks were stabbings-began to wane in March and April 2016. But the relative silence was shattered April 18 when a bomb detonated on Egged Bus 12 in Jerusalem injured 21 people. 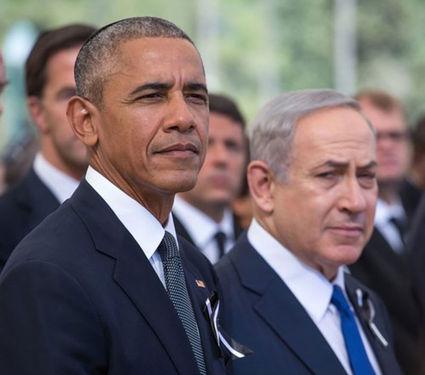 The icy relationship between President Barack Obama (l) and Prime Minister Benjamin Netanyahu-pictured here during September's funeral for Israeli statesman Shimon Peres-grew colder after the Obama administration refused to veto a resolution against Israeli settlements at the United Nations Dec. 23.

In June, four Israelis were killed and an additional seven were wounded in a Palestinian terrorist shooting at the popular Sarona food and retail market in Tel Aviv.

The wave of fires

In November, a massive wave of wildfires in Israel caused an estimated $520 million in damage. For eight days, firefighters battled 90 fires in 1,773 locations, with the largest blazes occurring in Haifa. Eight-hundred of that city's apartments were rendered uninhabitable, leaving 1,700 people homeless. More than 32,000 acres of land across Israel were destroyed.

Israeli Public Security Minister Gilad Erdan said between 40 and 50 percent of the fires were the result of arson, marking the emergence of a new form of Palestinian terrorism.

The international community-including several of Israel's Arab and Muslim allies-was instrumental in helping the Jewish state combat the flames. Egypt, Jordan, Azerbaijan and Turkey all sent firefighting equipment to Israel. The Palestinian Authority also pitched in by sending fire trucks to Israel, representing a rare moment of Israeli-Palestinian solidarity.