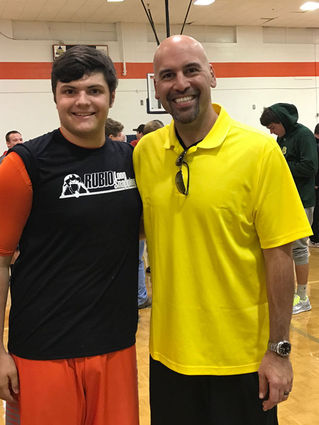 Perhaps one day, Winter Park High School long snapper Evan Dvorchik's name will be listed with wide receiver Julian Edelman of the Patriots or quarterback Jay Fiedler or offensive tackle/guard Kyle Kosier-all three of whom are on the list of 10 greatest Jewish football players according to the American Jewish Historical Society. Dvorchik was named one of the top performers at the Rubio Long Snapping Camp in Kennesaw, Georgia, on Sunday, Dec. 18. If his name sounds familiar it is because he is the son of Keith and Alison Dvorchick of Winter Park. (Keith is The Roth Family JCC CEO.)

For those who aren't familiar with what a long snapper is, in American football, the term long snapper refers to a center whose duty is to snap the football over a longer distance, typically around 15 yards during punts, and 7–8 yards during field goals and extra point attempts.

"Evan Dvorchik was beyond solid in Georgia. I saw him recently in Washington and he was night and day better this time around. He is snapping with a ton of confidence as his ball hits under .77 consistently. Body is good and I love his attitude," said Chris Rubio, the long snapping instructor for Rubio Long Snapping.

Rubio has followers from all over the world; attending in mass to the sought-after camps and events offered across the country. Over the past two years, Rubio has had over 260 snappers go to college.