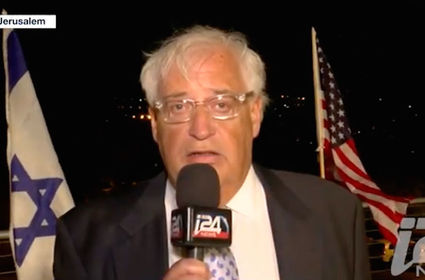 (JTA)-NORPAC, one of the largest pro-Israel political action committees, praised President-elect Donald Trump's pick for U.S. ambassador to Israel for his "lifetime of pro-Israel advocacy."

Congratulating David Friedman on his appointment, NORPAC in a statement called him "an accomplished attorney" with "extensive knowledge of Israel and the Middle East."

"His lifetime of pro-Israel advocacy has earned him the trust and respect of the Israeli People, a point which will enable him to best fulfill his duties in representing U.S. interests in Israel," the statement said.

The president-elect's transition team said in a statement that Friedman intends "to work tirelessly to strengthen the unbreakable bond between our two countries and advance the cause of peace within the region, and look forward to doing this from the U.S. embassy in Israel's eternal capital, Jerusalem."

Friedman supports and has funded construction in settlements and suggests it is time to think of alternatives to the two-state solution.

Liberal Jewish groups and lawmakers have spoken out against the nomination of Friedman, who has described the liberal pro-Israel group J Street as "not Jewish" and "worse than" Jewish collaborators with Nazis, and President Barack Obama as "blatantly anti-Semitic."

The American Israel Public Affairs Committee, in response to a recent JTA request for comment, stuck to its longstanding position of not pronouncing on nominees.