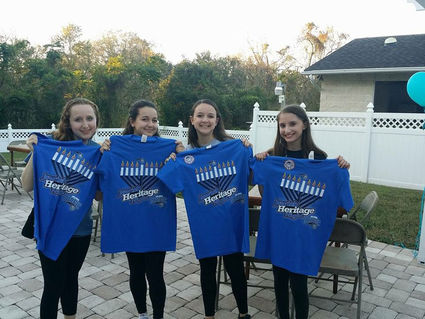 Jewish teens from throughout Central Florida gathered together on Wednesday evening, Dec. 29 to celebrate Chanukah. The evening started at the home of the directors of Cteen Maitland Chapter, Rabbi Ed and Bracha Leibowitz. The teens enjoyed a delicious BBQ with Chanukah delicacies of latkes and sufganiot.

After filling their bellies, socializing, and getting pumped up for the game, we were off to Jewish Heritage night Orlando Magic Game where Magic played the Hornets. Each teen received a custom t-shirt made specifically for the special game. Arriving at the Amway Center, they were greeted by hundreds of more people who were there for the same reason, to unite and ignite! A member of the Jewish community was honored with singing the national anthem while proudly wearing his kippah in front of thousands of fans.

During half time all participated in a special Chanukah Menorah lighting accompanied with joyous song and dance.

Following the game, all who participated in Jewish Heritage Night were treated to layups on the court.

Magic wasn't enough to pull our home team through-they needed a Chanukah miracle but it seems like this time the Magic Dreidel landed on Shin instead of Gimel... nevertheless, a great time was had by all who participated.

"This event inspires me and makes me proud to be Jewish" said Nadav Rubina of Altamonte Springs. "To see so many fellow Jews celebrating together in such a public place proves that Am Yisrael Chai," he concluded.