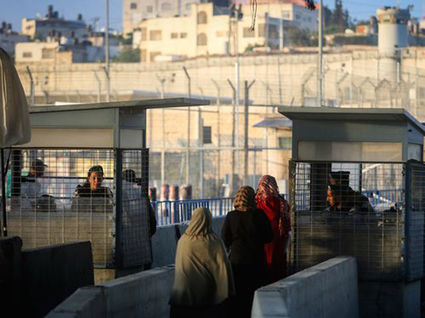 Palestinians cross the Kalandia checkpoint on their way into Jerusalem June 10, 2016.

Remember John Howard Griffin's 1961 book "Black Like Me," about a white journalist who posed as an African-American in order to experience what life was like for blacks in the South? An American journalist recently undertook a Palestinian version of that experiment.

Hearing complaints about Israeli checkpoints that supposedly restrict the movement of Arabs in Judea and Samaria, filmmaker Ami Horowitz of Fox News decided to see for himself. He hired a Palestinian driver and, traveling in a car with Palestinian license plates, they drove "throughout the West Bank." How often did Israeli troops interrupt their journey? "We were never stopped," Horowitz reported.

Next he decided to see what it's like for Palestinians crossing at the checkpoints that separate Israel from Palestinian Authority-controlled areas.

One was the Kalandia checkpoint. It's the last defense line for Jerusalem-the final point at which Israeli soldiers can check to make sure that Palestinians are not smuggling bombs, guns or knives into Israel's capital. One would expect there to be long lines and complicated searches that would make the lives of Palestinian travelers difficult. But that wasn't the case at all.

Horowitz asked three different Palestinians at the Kalandia checkpoint how long it takes them to get through on a typical day. All three said, "10 minutes." One, in fact, told Horowitz that the time "the soldier checks my ID or my work permit is just one minute."

The allegation that Palestinians are unfairly restricted by the checkpoints is circulated regularly by the United Nations, much of the international news media and J Street types. It is an accusation that has been embraced even by the U.S. State Department. Former Secretary of State John Kerry, in his infamous Dec. 28 speech, declared that the Palestinians in the disputed territories "are restricted in their daily movements by a web of checkpoints and unable to travel into or out of the West Bank without a permit from the Israelis."

Yet you could say the exact same thing about Americans. We are restricted by security checkpoints in every airport, every courthouse and countless office buildings throughout the country. We have to empty our pockets, take off our coats, turn our laptops on and off, sometimes remove our shoes, throw out our bottles of water, and submit to body scans and searches, among other things. And we can't travel across America's border without a permit-known as a passport-from the U.S. government.

How many of those awful security checkpoints does the Israeli military actually maintain? Look at the website of the extreme left-wing group B'Tselem, a leading critic of Israel. It states that the military "currently operates 27 permanent, staffed checkpoints in the West Bank."

Twenty-seven-in a region of more than 2,000 square miles. And 26 of the 27 are situated at the border between Israel and the disputed territories. What sovereign country does not have checkpoints at its border?

According to B'Tselem, the Israeli military also operates 16 "temporarily manned checkpoints." They "are generally open for Palestinians to cross without being checked." Israeli security forces are present only "sometimes." I would say they hardly even qualify as "checkpoints."

Every year, there are hundreds of attempts by Palestinians to smuggle weapons into Israel. The last year for which I could find that statistic was 2012, when there were 475 such smuggling attempts.

So: A 10-minute delay for Palestinians versus 475 terrorist attacks against Israel. Is that a justified trade-off? You decide.

Stephen M. Flatow, a vice president of the Religious Zionists of America, is an attorney in New Jersey. He is the father of Alisa Flatow, who was murdered in an Iranian-sponsored Palestinian terrorist attack in 1995.