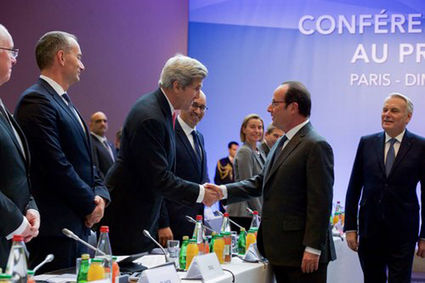 (JNS.org) Sunday's Mideast conference in Paris, attended by officials from some 70 countries, concluded that the "two-state solution" is the only way forward to resolve the Israeli-Palestinian conflict and warned against unilateral steps by either side.

In their final communique, conference participants said they "call on each side... to refrain from unilateral steps that prejudge the outcome of negotiations on final-status issues, including, inter alia, on Jerusalem, borders, security, refugees and which they will not recognize."

While the statement did not explicitly criticize President-elect Donald Trump's plans to move the U.S. Embassy in Israel from Tel Aviv to Jerusalem, a French diplomat said the communique's final paragraph was intended to send a message to Trump.

"It's a tortuous and complicated paragraph to pass a subliminal message to the Trump administration," the diplomat said, Reuters reported.

Ahead of the meeting, Trump's advisers told French officials he strongly objected to holding the conference just days before his inauguration, Haaretz reported.

"It underscores this is not just one administration's point of view, this is shared by the international community broadly," Kerry said. This is expected to be the last international forum Kerry participates in before the end of his term Jan. 20.

Israeli Prime Minister Benjamin Netanyahu, whose government did not attend the conference, called the gathering "useless" as well as an attempt by France and the Palestinians to "force terms on Israel that conflict with our national needs."

Netanyahu said he looks forward to a new era under Trump, who has harshly criticized international efforts to impose solutions on Israel.

"This conference is among the last twitches of yesterday's world. Tomorrow's world will be different-and it is very near," said Netanyahu.

Israeli Ambassador to the United Nations Danny Danon, echoing the prime minister, said that "in the next few weeks we will enter a new era and work with the incoming U.S. administration to undo the damage caused by the [recent U.N.] Security Council resolution [against Israeli settlements] and these other one-sided initiatives."

Some Western allies of Israel also criticized the conference. The United Kingdom did not sign onto the communique and only sent junior diplomats to Paris, with a spokesman from the U.K. Foreign Office explaining that the gathering came "just days before the transition to a new American president, when the U.S. will be the ultimate guarantor of any agreement."

"There are risks, therefore, that this conference hardens positions at a time when we need to be encouraging the conditions for peace," said the U.K. spokesman.