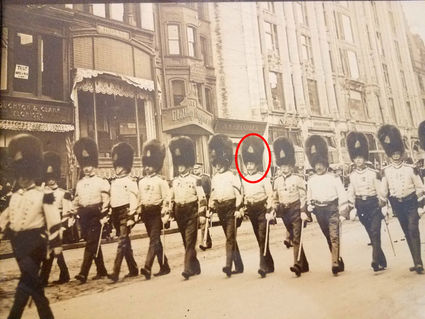 Undated photo of Anderson's great-grandfather, Solomon Anderson, marching in a parade in full regalia.  Sol's 1930 obituary in the NY Times noted he was a "captain in the Old Guard in the city of New York." A newly found cousin also possessed the same picture.

"My Jewish Roots" Workshops, sponsored by the Jewish Genealogical Society of Orlando (JGSGO) continue in March with the workshop: Using Ancestry.com for Jewish Research.

What's in a name? Apparently, quite a lot when the derivation of your surname is a mystery. As a child, I had always wondered why my surname, Anderson, was so non-Jewish. Growing up, I knew the names of all my grandparents: My mother's parents were Emanuel Dannenberg and Alma Wolf; my father's parents, however, were Ruth Fischer and Jerome Anderson. Three out of four were solidly Jewish surnames. Whence the Anderson? That was always the question.

Before my mother passed away in 1991, she had been contacted by a distant cousin of hers, Jim Dannenberg. He had done a lot of research in Germany with the help of a genealogist and developed a huge database of people on that side of the family. It piqued my interest, and I began to dig into other sides of the family. I was especially keen on discovering the Anderson side, and I started by trying to figure out to whom I could turn for information. My father had died in 1984, and his younger brother had predeceased him in 1977, so there were no more close Andersons to whom I could turn. My younger siblings knew nothing; nor did my three first cousins. It was up to me.

As I started developing my family tree, I downloaded the free trial of Brother's Keeper Windows genealogy software (www.bkwin.net)-which I later bought, and continue to use to this day. It allowed me to maintain my records visually and gave me a starting point for my research. Using the computer in those early years was not easy as we relied on dial-up connections. So, I turned also to the public library where I could log on to various sites that housed censuses.

My early tree allowed me to visualize my grandfather Jerome Anderson's family. His father and mother's names I already knew to be Sol Anderson and Lillian Kline. I also knew he had three siblings, Harry, Milton and Virginia. That was it. As I began to research each member of Jerome's family, I learned quite a lot about the Andersons. The oldest, Milton (1886-1930), never married and died young from tuberculosis. Harry was the next oldest, and it took me years to fully research him. I ultimately learned his specifics. His full name was Harold Henry Anderson (1888-1958), and he married three times. His first wife, Madge Loew, married Harry in 1911 under the name Minnie Lebowitz. Together, they had two children, Edmund and Marjorie. It was Edmund with whom I connected in the early 1990s. It turned out we both had the same questions and we both possessed a copy of the same photograph of our great-grandfather, Sol Anderson, showing him in a parade by the "Old Guard" marching on lower Broadway in full regalia with beaver hat and sword. According to Sol's 1930 obituary in the NY Times, he was a "captain in the Old Guard in the city of New York."

Edmund also knew nothing specific regarding the Anderson name. However, we both had heard the same apocryphal story, which had haunted me for so many years. The story went that there were two brothers who had argued with each other. One changed his name to Anderson while the other took the name Ansorge.

But how to track this down? Ansorge, thank heavens, is a much rarer name than Anderson. In the late 1980s, I began to look for Ansorges in the online phone directories. I wrote a generic letter and mailed off dozens of copies across the country. A number of responses soon led me to believe there were two "branches" of Ansorge: one gentile, the other Jewish.

By the mid1990s, I had also dug more deeply into online websites, looking up obituaries of people named Ansorge. While my tree was developing nicely with well into the thousands of names, I was not yet connecting Anderson with the Ansorge line; instead, I had two separate trees.

Around 1995, I learned from an obituary that a Pearl Rudman Ansorge who had died in 1979 had a son, Robert Ansorge, who was alive and living near me. I found his address and wrote, hoping to receive an answer. This led to a visit to his home where we talked about the Anderson-Ansorge story. Unfortunately, he had never heard the story. On the other hand, he was able to talk about his Ansorge ancestors, and they were Jewish.

As the years went on, I continued to search back the earliest Ansorges I could find.  Robert's father was Milton H. Ansorge; Milton's brother was Percy Irving Ansorge. Their father was Henry Perry Ansorge. The track now led back to the "old country!"

Robert's grandfather, Henry Perry Ansorge, and his two brothers were born in Ostrowo, Germany: Henry in1851, Mark Perry in 1844, and younger brother Morris around 1853. The next big break came when I found Mark's passport application from 1907, which I obtained from Ancestry.com (see exhibit).

From this I discovered he came from Ostrowo, Prussia. More accurately, as JewishGen points out, Ostrowo was in the province of Posen, which belonged to Germany from the mid-1840s until World War I. Prior to the 1840s and since World War I it has belonged to Poland.

So, now the research went into overdrive. I was able to determine from the passport and Passenger Manifest of Henry Perry Ansorge the date he immigrated: 10 May 1865 (arriving in New York on 17 Jul 1865). The Passenger Manifest gives the name Heimann Ansorge travelling with his brother Marcus (Mark) and their mother Hannchen (Hannah). With that information, I found the marriage return record of Mark Perry Ansorge with Jennie Bach, which I obtained from the Health Department of the City of New York. Therein the parents of Mark (aka Max, Marx, Marcus) Ansorge are shown as Hannah Silverman and Perez Ansorge.

The next step was to locate the names of Perez Ansorge's siblings. I sent away for the microfilm, Jews of Ostrowo, 1836-1838, from the LDS, and viewed it in a local Family History Center. I learned that Perez had four brothers, Aron, Heimann, Meyer and Solomon. Was this the breakthrough connection I was seeking?  After all, my great-grandfather was also named Solomon.

Searching everything I could on Solomon Ansorge, I learned he had emigrated to England prior to coming to the U.S. in 1857. He and wife, Sophia Dunkar, had five children in England: Jeannette, Bernard, Goodman, Joseph, Gabriel; and one, Julia, in the United States.

Aron never came to the U.S., so that was a dead end.

Next, I looked at Ansorge brother Heimann. He had seven children with his second wife, Flora Levy: Philip, Morris, Joseph, Henry, Thomas, Abraham and Bertha. Some names were beginning to look familiar.

Finally, I turned to the fifth Ansorge brother, Meyer, and found that he and wife Ernestine Goldschmidt had five children: Joseph, Gabriel, Solomon, Pauline and Morris.  Could this Solomon be my great-grandfather? Yes! The one and the same! I confirmed this through several records: first, the death certificate of Sol which I obtained from New York City's Municipal Death Records listed Solomon's parents, Meyer Anderson and Ernestine Goldschmidt. It was further confirmed in FamilySearch.org's New York Marriage Record of Solomon Anderson and Lillian Kline: clearly listed were Sol's parents, Meyer Anderson and Ernestine Goldsmith.

But now I had to determine if there was any switching of surnames. I turned to the family of Solomon and Sophia Ansorge, my grandfather's uncle and his wife who came to New York from England in 1857. From various censuses I learned that their sons, Goodman, Joseph and Gabriel took the surname Anderson! As further proof, looking at Heimann Ansorge's son, Morris, I found that he had used Anderson and Ansorge interchangeably in the records: 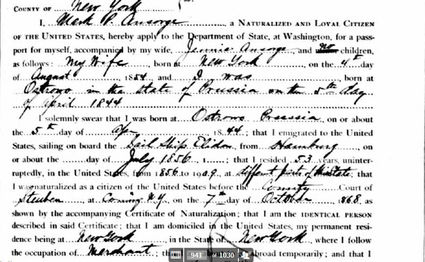 I also learned that my great-grandfather's father, Meyer Ansorge, himself took the surname Anderson. All his records have him listed as Anderson save the census of 1860 which listed him as Anzirk. I was now vindicated! The mystery was solved. As to the reason for the switching of surnames, who knows? What was important was my connecting with the Ansorgefamily at long last...and knowing there is a Jewish branch of the Anderson family!

You can learn how to access many important resources at the Jewish Genealogical Society of Greater Orlando's (JGSGO) "My Jewish Roots" workshops. The next one is "Finding Your Jewish Roots on Ancestry.com" with Ancestry.com expert Crista Cowan.  It will be held on Thursday, March 2 at 7 p.m. at the Central Florida Hillel, UCF, at 3925 Lockwood Blvd., Oviedo. The workshop isfree and open to the public. Bring your own laptop to participate in the lab portion. It is also possible to attend via the Internet. Pre-registration is required. Pre-register for either in-person or online participation at www.jgsgo.org/MyJewishRoots.