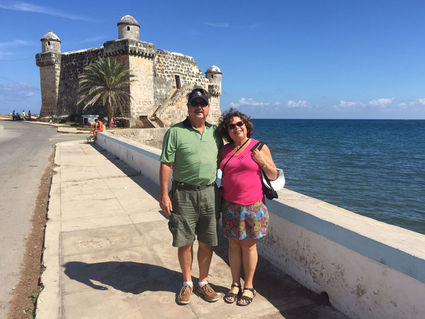 Scott and Rhonda Des Islets in the fishing village of Cojimar, where Papa Hemingway moored his boat on the way to his estate, which was left to Cuba as a museum.

My husband, Scott, and I like to travel to the Caribbean and when we saw that Jet Blue Airlines had inexpensive $59 nonstop flights to Cuba from Orlando, which was recently opened for Americans to travel to, we jumped on it. I had always remembered hearing how beautiful Cuba was when I was a child and many of my parent's friends honeymooned there or visited the resorts and casinos. When I googled hotels, my heart sank as they were $500-plus per night, but then I realized that there was a range of Airbnb homes also known as Casa Particulares from $25 to $100 per night. So, off we went, but not before registering our trip online with our State Department to feel some sense of security since we were doing this on our own.

Luckily, I did a lot of research before going (like needing a Cuban Visa and Cuban Health Insurance) and I do speak enough Spanish to get by, so our trip was without incident. I mention this because I would not suggest going the way we did unless you stay at a hotel and take tours with bilingual guides.

We stayed in a lovely Colonial 1944 casa in the Vedado neighborhood of Habana with the locals where nobody spoke English. There was no TV, radio, clock, telephone except for local calls, or Internet, however, you can buy a card for spotty Internet use in some parks and hotels. It felt like being back in my childhood days. We rode in classic 1950's cars for taxis, which was so fun and of course walked everywhere.

Since Cuba has no relationship with the United States other than an embassy, we were not able to use credit cards and there are no American businesses or restaurants. Imagine traveling where there isn't a McDonalds or Starbucks? So cash is king. But don't bring American dollars as there is a 10 percent changing fee. We brought Euros.

There are two kinds of restaurants, state run and private ones since 2011 and the food was good, but it would be difficult if you kept kosher. The hotels in Havana were gorgeous and had so much history, but since they were state run, they were very expensive.

Drinking Mojitos and Cuba Libres on the historic Hotel Nacional Veranda overlooking the water and the Malecon (the broad esplanade, roadway and seawall which stretches for 5 miles along the coast in Havana, from the mouth of Havana Harbor in Old Havana, along the north side of the Centro Habana neighborhood, ending in the Vedado neighborhood) was a definite highlight. There we also enjoyed a formal dinner with classical opera singers and the famous Caberet show afterward. Being a musician, I especially liked all the live music that was everywhere, in parks, on streets, in all the restaurants and bars.

We especially enjoyed going to Ernest Hemingway's home just outside the city and all the museums, which were in beautiful buildings and palaces, and learning all the history.

There are three synagogues in Havana and we visited Beth Shalom, the Conservative one. There were photos of famous people who visited it including Fidel Castro who was there two times. He turned the adjoining Hebrew school building into a city cultural center, but luckily kept the sanctuary open for Shabbat services. My travel books said we needed special permission to attend services, but a guide there said we could attend anytime.

Before the Revolution in 1960, there were 15,000 Jews in Cuba, but today there are only 1500 remaining. I am told there isn't any anti-Semitism, and we were even given an unexpected tour. 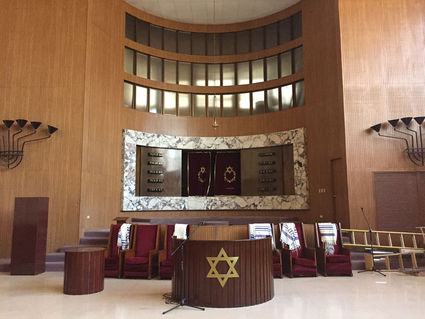 Inside the Gran Synagogue Beth Shalom, which is in the Vedado neighborhood of Havana where the Des Islets stayed in an Airbnb.

Knowing that the average monthly salary is just $25, I brought basic things like soaps, shampoos, pencils and pens to give out on our walks and they were so appreciated. Yes, it was sad to see such a wealthy country now with dilapidated buildings and crumbling sidewalks and so many poor people, but the experience was amazing. FYI, most public bathrooms other then luxury hotels lacked toilet seats, toilet paper and soap, so you have to carry it with you.

We would definitely return again to visit more museums in the capital and spend a few days at the gorgeous beaches and colonial towns where you can visit tobacco and coffee plantations. I am told that the country is changing for the better every five years, so I am glad that we got the chance to see it when we did.