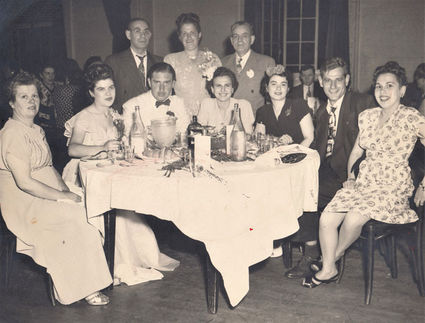 A few years ago, I became increasingly interested in learning about my family history and genealogy. As is the case with many people, I never thought to ask questions while my grandparents were alive. So I found myself trying to go back, find clues, and put the pieces of the puzzle back together again.

Ancestry.com was where I began. I started with building a tree. I put in the names of my parents, my grandparents, and what I knew of my great-grandparents. Although I had never met him, my mother told me that my great-grandfather's name was Benjamin Bornstein, but family fondly referred to him as Pop. Interestingly enough, my great-grandfather's brother was also named Benjamin Bornstein (that seemed odd), and our family called him Uncle Ben. My mother had vague memories of Uncle Ben, but nothing really solid other than that he had moved to St. Louis. So I thought that would be a great place to start.

Ancestry.com helped me find census records for a Ben Bornstein in the St. Louis area. Those census records led me to find the listing of a Ben Bornstein and his wife in a St. Louis cemetery index. All the signs pointed to him being my Uncle Ben, but I just was not 100 percent sure. And that is when I discovered what a wonderful group the Jewish Genealogical Society of Greater Orlando (JGSGO) is after attending only one general meeting. Not long afterwards, Tom Hirsch, the vice president of Programs and Publicity, remembered me talking about having family in St. Louis and emailed me that he was going to be travelling to the St. Louis area. He offered to go to the cemetery with the Ben Bornstein burial and take photos of the headstones of those I believed to be relatives. Fantastic! That was so nice of him to do so! It proved to be an invaluable favor. To finally get that photo gave hope that I would be able to see this Ben's Hebrew name and his father's name. With the photograph, everything started to fall into place. This, indeed, was my Uncle Ben, brother of my great-grandfather, Pop. Uncle Ben's name in Hebrew was Bentzion, in contrast to Pop's name, which was Benyamin. It was simply a coincidence that when the brothers came to the United States-in different years-they both ended up going by the same first name Ben.

Now that I had confirmed I found the correct relative, I went back to Ancestry.com. This time, I looked for any subscriber-created family tree that may be linked to my Uncle Ben. I found one! I messaged the creator through Ancestry.com to see how we were related. As it turns out, we are related through my Uncle Ben's wife. At first glance that may not seem helpful, but it was-while we are not blood relatives, we still share family through marriage. He was actually able to provide me with the first photo I have ever seen of my Uncle Ben's family. It was priceless!

Those initial discoveries continue to lead me from clue to clue. It is amazing that I have been able to find cousins-the living descendants of Uncle Ben, even becoming friends on Facebook.

Unexpectedly, the recent desecration of Jewish graves at the Chesed Shel Emeth cemetery in St. Louis really hit home. That is where my newly discovered family is buried. My heart dropped thinking that my Uncle Ben, the relative that I never met, could possibly have been disrespected in such a way. It is an odd connection like that. I spent all morning the day after I heard trying to get through on a phone line to find out if any of my relatives had been impacted. Thankfully they weren't, but I still felt bad for those that were. 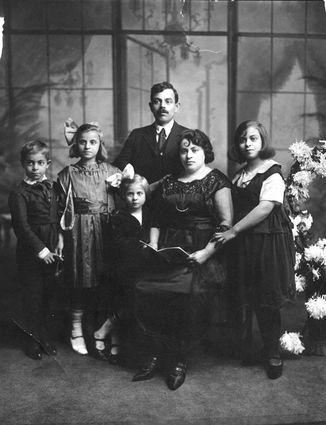 Uncle Ben's family: This was the photo that was sent to Rachel Luce-Hitt after connecting with someone on Ancestry.com who was related to Uncle Ben's wife.

Hopefully my St. Louis cousins and I will have a get together in person one day. Until then, they have shared other stories and family pictures with me. I look at every old photo I unearth in awe. Who were they? What were they like? What did they endure? What choices did they make to ensure that the next generation could thrive? All of a sudden I am part of something much bigger. My research is designed to tell their stories... but what I am coming to realize is that, at the same time, I am telling my own story as well.

You can learn how to access many important resources at the Jewish Genealogical Society of Greater Orlando's (JGSGO) "My Jewish Roots" workshops. The next one is "Analyze Your DNA Results" when genetic genealogist Diahan Southard returns to explain how to analyze your DNA results after having it tested. It will be held on Tuesday, April 4 at 7 p.m. at the Central Florida Hillel, UCF, at 3925 Lockwood Blvd., Oviedo. The workshop is FREE and open to the public. Bring your own laptop to participate in the lab portion. It is also possible to attend via the Internet. Pre-registration is required. Pre-register for either in-person or online participation at http://www.jgsgo.org/MyJewishRoots.