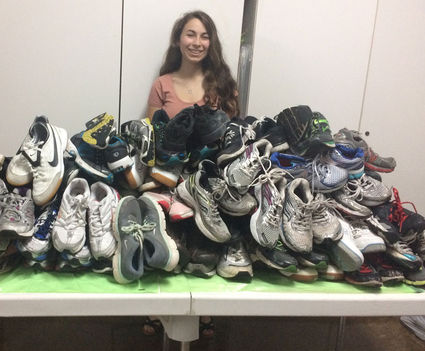 Frances Hoffen puts your donated best feet forward for the benefit of others.

It's not hard to be moved by an article that shares the story of struggling families, whether they are dealing with homelessness, hunger, or underemployment. What is hard is taking that desire to help to the next step, and doing something to positively impact the very people you have read about. Since December of last year, 17-year-old Lake Mary High School junior Frances Hoffen has been doing just that. On Dec. 31, the teen-ager discovered an article by the Sentinel's Kate Santich about an Orlando area homeless shelter, The Women's Residential and Counseling Center (WRCC), owned and managed by the Coalition for the Homeless. While reading through the article, Hoffen learned that the shelter was no longer accepting women and children due to mold and funding problems.

After spending two weeks in a BBYO program in Washington, D.C. ("Standup DC") last summer focusing on hunger and homelessness, the story seemed to "call out" to Hoffen, who became determined to try to make an impact on a local level.

"This past summer I learned about the responsibility of giving back..." she said.

Hoffen reached out to Santich for more information, and for help connecting with Tracie Morris, director of Development for The Women's Residential and Counseling Center. Morris was thrilled to hear from Hoffen, and emailed that it was wonderful to have a young person interested in making a difference.

Since the WRCC was experiencing a serious shortfall of funds, Hoffen decided she could best help by raising money on their behalf. After exploring several different fundraising options, she decided to partner with an organization called GotSneakers?, a sneaker recycling company that gives back a portion of the proceeds of recycled sneakers as a social fundraising platform. Both Hoffen and her mom, Debra, thought sneakers were a great way to involve the community in the project, and something that their friends and neighbors of all ages could take part in.

"While it's not always easy to ask people for money," Hoffen shared, "everyone has sneakers in their closet that they are no longer using. As soon as people hear about the project, they open their closets, and want to help. The shoes are recycled and sold abroad, and the funds received will be sent to The Women's Residential and Counseling Center."

"Thank you Frances! What a giving spirit you have! We're very grateful for you!", commented the WRCC.

Hoffen has been collecting used sneakers since January in a bin provided by GotSneakers? on the front step of her Lake Mary home as well at Congregation Ohev Shalom and Front Running Sports in Lake Mary. Currently, the high schooler has collected over 150 pairs of shoes, with a goal of collecting as many as possible by April 1st.

You can help the teen-aged philanthropist put her best foot forward by donating at any of these locations:

Way to Go young Lady. Proud of Frances Hoffen committing her time to this cause setting an example to her community that local initiatives work! Keep on doing good and change the world. Raymond Schloss - The Nerherlands