Meet the new rabbi in town 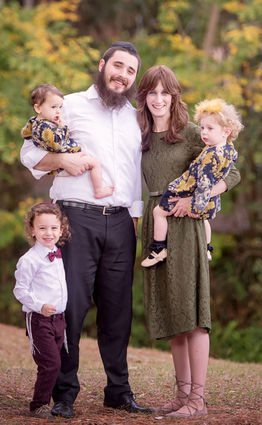 Rabbi Mendy and Mussie Bronstein and their three children.

Rabbi Mendy Bronstein with his wife, Mussie, and three children (Yaakov, Batya and Bina ka"h) hit the ground running, so to speak, when they arrived in Altamonte Springs last September. They came from Milwaukee, Wisconsin, where Rabbi Mendy was the youth director and associate rabbi at The Shul. From photos and posts on his Facebook page, the Milwaukee Jewish community loved him dearly.

And why not? From his genuine smile, twinkling eyes and clear understanding and explanation of Judaism, just sitting and talking with him is inspiring and invigorating (even for this vayblekh goy).

With Rabbi Dubov in Mait-land, Rabbi Majesky in Lake Mary, why another rabbi so close?

"We're growing!" Rabbi Mendy said. "As long as there are people who are not involved, there is a need to grow."

There is no competition among the Chabad Houses. They work together to bring educational, social and holiday programming to the Jewish community.

"Our goal is not to come here and open a shul," Rabbi Mendy stated. "If the community grows and that need presents itself and you have a group of people who'd like to start a minyan, that can happen, but it's not our objective."

As with all the Chabad Houses in Central Florida, Rabbi Mendy welcomes with open arms all Jewish people who would like to be involved at whatever level.

"We all come from different backgrounds. What's one step for one person is no big deal for someone else," he explained. "So, we don't put a focus on how observant a person is or isn't. I consider every Jew-every person-comes from a different background and level of education and a different level of observance. I would never judge someone and say 'you are something and you are not something.'"

In his personal life, Rabbi Mendy is observant. Born and raised in Brooklyn, N.Y., he studied in yeshivas in New York, England and Argentina. He received his rabbinical ordination from the Central Chabad Yeshiva. His travels have been extensive-to the Ukraine, India, Cuba and throughout the United States.

But he does not believe in labeling people. "Labels are for shirts," he stated. "We're just Jews! If we try to see what we all have in common instead of seeing our differences the world would be in a better place."

The other half of the Bronstein team is Mussie. She comes from the Crown Heights Jewish community, Chabad Headquarters, in Brooklyn. She graduated with honors from the Beis Rivkah High School and then earned her bachelor's and master's degrees in Special Education. She, like Mendy, was a program director for young students. Mussie also was a preschool teacher in a Brooklyn Jewish preschool for girls and the educational director at The Shul in Milwaukee. Here in Central Florida, she teaches at the Chabad of South Orlando Day School.

Rabbi Mendy and Mussie bring the warmth and radiance of Judaism to all around them, and their goal is to create a vibrant Jewish community in Altamonte Springs.

In fact, the Altamonte Jewish community is already responding to the Bronstein's warmth. More than 70 people attended the Purim festivities at their home (which is also where they hold Shabbat dinners and services); and last Saturday they held their first bar mitzvah.

Rabbi Mendy leads a Hebrew reading crash course and Torah study for adults, and hopes to start Jewish Institute Learning classes soon. There are also programs for children. The "Chai Five Youth Club" is set up for pre-K through first graders and a "Give and Get" club where members complete a project to give to those who are less fortunate.

On March 26, Chabad of Altamonte Springs will host two shows of the Model Matzah Bakery at The Roth Family JCC-1:30 p.m. and 3 p.m .; and on April 10 and 11 they will host a Passover Seder.

Visit Chabad of Altamonte Springs' website (www.jewishaltamonte.com) to see all the events and programs that are available to all Jewish families-there is also an Online Kids Zone with all kinds of activities like videos, games and stories where children can spend hours (if allowed) playing and learning Judaic values at the same time.