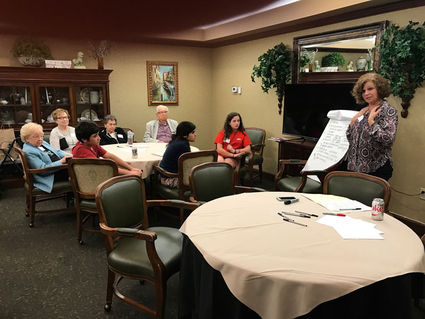 Modern-day plagues encompass maladies ranging from XX to YY, noted a group of mature adults and teens. An intergenerational program on this subject was sponsored by The Jewish Pavilion and Ohev Shalom synagogue. Ohev Shalom's Amy Geboff moderated.

As Passover seders approach next month, and many Jews again recite the list of 10 plagues that were wrought upon the Egyptians, it behooves us to consider, "What are today's modern-day plagues, and what am I doing to help combat them?"

Indeed, that's the question that a group of teens and mature adults asked themselves at a recent Jewish Pavilion intergenerational program held at the Village on the Green senior-living facility in Longwood. The "frogs and locusts of the past" may be somewhat equated with the racism and anti-Semitism that we see worldwide today, class members indicated. "We're not born being bullies or racists," noted one teen. "We are taught (by those around us) to be that way."

Many in our society think that the "modern-day plague" of bullying is not a big problem. However, it can be extremely damaging during the teen years. In fact, there have been a number of national news stories about teens who have committed suicide after being bullied by their classmates.

"I stood up for a gay friend of mine in school, and I lost some friends in the process," noted another teen. "But I know the right thing to do is stand up for what I believe in."

Other modern-day plagues discussed by the class included hunger, homelessness, poverty and disease-in both America and around the world. "We have a lot of (fundraising) drives and community service programs through our shul to help against these on a local level," said Amy Geboff, director of Congregation Ohev Shalom Youth & Family Education, and moderator of the program.

"All of us have to become educated on the issues, and do what we can on our level."

"At the Jewish Pavilion, we work to stave off the loneliness and isolation that plagues older adults in long-term care by bringing year-round programs and holiday celebrations. April will be one of our busiest months, as we keep Jewish residents connected by bringing Passover programs to over 70 facilities throughout Orlando," noted Nancy Ludin, Jewish Pavilion executive director.