Running for the health of it 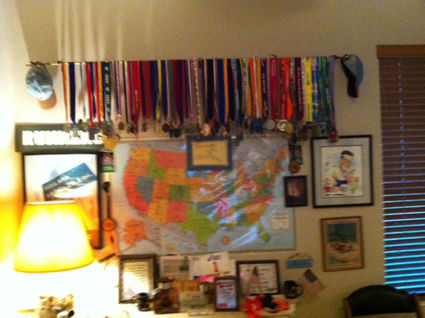 A map of the United States and all the medals the Baclars have won in the 50 States Club marathons.

If everyone's lifestyle was like Jules and Elyse Baclar's, doctors and hospitals would soon be out of business. This vibrant young Oviedo couple -Elyse is 69 and Jules is 71-love to spend their time and money exercising. They cross-country ski every winter in the Adirondacks; snow-shoe, ("It's like walking with tennis rackets on your feet," said Elyse); and bicycling on all the trails in Florida. But their passion is running.

"We both have been involved in running our whole lives and we believe in it," said Jules.

At first they ran for the fun of it and joined the Track Shack on 17/92 where they eventually became group leaders training others to run. They love the sport so much that back in 1996 they set a goal to do a marathon in all 50 states, and they did it!

"You run your first one and get hooked, then you are in it!" commented Elyse.

Twenty years ago the couple joined the 50 States Club (when Elyse was a mere 49 and Jules a strapping 51) and in 2008 they completed their goal of running a marathon in each state (including Hawaii and Alaska). They are also one of the few couples that run together-not always side by side in a race because they run at their own paces, "but sometimes we finish holding hands," said Elyse, smiling. That's not surprising. Jules came to Elyse's sweet 16 party and they married three years later and have been side by side for 50 years.

Because they both worked-Jules was a mechanical engineer and consultant for Travelers' Insurance and Elyse worked at the JCC and then The Mayflower as a fitness instructor-they took extended weekends to do their runs. They ran on average six marathons a year-with a slight break in 2004 because they both were diagnosed with cancer. Elyse had breast cancer and Jules had prostate. "It was a bump in the road," said Jules matter-of-factly. "We took a couple months off and that was it."

Both are healthy and fit now and don't need any medications.

A marathon is 26.2 miles, and the cut-off time for races is usually between four to seven hours to complete. Runners don't have to run the entire time. Some do intervals (walk, jog, run) others run the entire race, and some just walk.

"When you sign up for a race, you know you have to cross the finish line by a certain time," Elsye explained.

"We have a friend in her 70s who walked one race, but she finished first in her age group-of course, she had no competition!" Elyse said.

The Baclars don't necessarily run to win each race either.

"We win if we finish the race and we're still walking!" Elyse said with a laugh. "That's an accomplishment," she continued. "How many people can run 26 miles or 13 miles?

The Baclars also planned their marathons to include something special in each state. In Kentucky they took a behind-the-scenes tour of Churchill Downs and visited a baseball bat factory. They visited several state parks, presidential libraries (they especially loved the Eisenhower Presidential Library), and take the time to learn the history of wherever they are.

The first marathon they ran was the Marine Corps Marathon through the streets of Washington, D.C.

Reminiscing, Jules said, "We ran under the Watergate, and the last two miles of it were straight uphill, ending at the Iwo Jima monument and Arlington National Cemetery. All the women got roses and the guys were told 'Move it! Move it!' And a crowd of people cheered for us. We enjoyed it."

Two other exciting marathon finishes were on college football fields. At Marshall University, as the runners approached the last lap, they were each given a football to run for a touchdown through the goal post. In the Indiana marathon, they ran through the University of Notre Dame to finish on the 50-yard line.

The couple has run in 60 marathons, and each one was different, leaving them with lasting memories, never knowing what to expect.

At one race it was pouring rain from the very beginning and the city folk gave out rain ponchos. In Maryland, just as the gun went off, it started snowing and it didn't let up. "It's always blowing in your face-never behind you!" quipped Jules.

In North Dakota they woke up to four inches of snow. What to do? You run! In Iowa the trail was so wet that runners kept slipping. "One guy kept slipping and he'd roll down the hill, get up to the trail and run!" Elyse said. In another race, they had to cross a stream, so they took of their shoes, rolled up their pants, walked across the stream, put their shoes back on and continued running.

In Kansas the race was in the middle of nowhere and the people helping them were on horseback, riding along side them. In Hawaii they were entertained as they ran by a pianist in tails playing a grand piano on top of Hurricane Hill while drummers played at the base of the hill, and in yet another cows ran with the runners.

"Once you can do the distance, the only difference is what you eat and what the weather is like," Elyse stated.

Speaking of eating, "Every runner has different ways of training. One friend drinks a pot of coffee before a race, another friend who does 100-mile runs, eats hamburgers!" Elyse explained.

The Baclars usually eat chicken the night before and Elyse eats breakfast cookies while Jules enjoys an energy bar the morning of a race, and both drink Gatorade. During the run they drink water and munch on dried cranberries.

"We don't do all the pasta and carbs. We can't handle it. The idea of training is you have to feel what your stomach will accept. Don't eat anything weird, otherwise you'll have issues or stomach problems," Elyse cautioned. "What one person can stomach, another person can't."

Another important tip is to wear what you train in-don't wear new clothes or new shoes, not even new socks.

"That's why it's better training with a bunch of people with experience because they have knowledge of what to expect," Elyse said.

The Baclars are now retired, and have cut back a little on their running but will never go out of being trained. They still run at least four days a week and go to the gym on the other days where they lift weights, do elliptical and stretching. Now they run half marathons (13 miles) and volunteer at the Disney Marathon every year.

They also are free to travel more, and wherever they travel they look for a race. They once planned a trip to Berlin to participate in a half marathon in which the last lap of the marathon was to be on the Olympic track that Jesse Owens ran on in the 1936 Olympics, subsequently winning the gold medal. Unfortunately, the trip was booked, but the date of the marathon was changed.

Still, Jules and Elyse have seen much of the world as they race around. In Jerusalem they rose before sunrise and ran by themselves through the city streets, passed the Wall and the Windmill and looked down over the city at sunrise.

"We always take our running gear so we can run wherever we are," said Jules.

They now have a new almost completed goal-to run marathons on all the continents. They ran the Millennium Marathon in New Zealand (2000)-the first place to see the new year come in, and then watched on big-screen TVs as the rest of the world greeted the new year; they had to do step-training for six months in preparation for the marathon on the Great Wall in China; they've run in Prague; Dublin, Ireland; Madrid, Spain; and on a preserve in Pretoria, South Africa, where the animals ran free and jeeps sped beside them to keep the lions away. 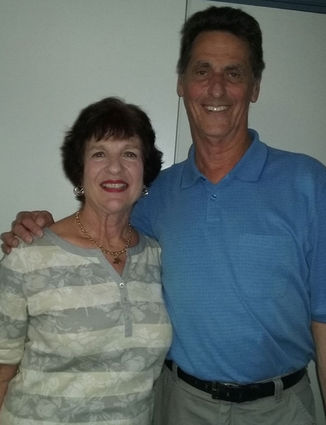 The only places left on their "to do list" are South America and Antarctica.

Recently, the couple has taken up a new hobby-to hike a section of the Appalachian Trail.

"It's something different and we'll learn about nature at a slower pace," said Jules.

This coming summer the couple will travel to upstate New York to visit family and run. "It's all around the run," said Jules.

"More people rust out before they wear out, like a car," Elyse said. "Our bodies are like a fine-tuned engine and if you don't keep it tuned it falls apart and doesn't run very well."

"You don't have to do much or do anything fancy-just start walking," said Jules.

Elyse agreed. "Put on running shoes, shorts and a top and go! Anybody can do it!"