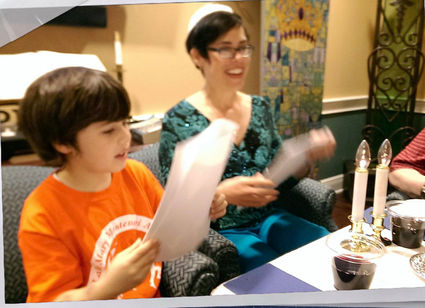 I heard this expressed on the television program "Undercover Boss." It referred to someone who was very poor in early life and yet moved on trying to make things better and succeeded:

"You can't let tough stuff get in the way of moving forward."

(That really got to me so I thought I would share it.)

I read this in the current issue of the World Jewish Congress digest and pass it along in part:

"Speaking recently at a forum in Jerusalem, Polish President ANDRZE DUDA said that when Poland was occupied by Nazi Germany during the Holocaust, 'there were heroic people but there were also evil people, and those who behaved in an inhuman way deserve to be condemned.'

(Tell us something we don't know!)

"The forum was jointly organized by the Israel Council on Foreign Relations (ICFR), which operates under the auspices of the WJC, and the Polish Institute of International Affairs.

(True, but many of your Polish people cooperated with the Nazis!)

Duda commended 'Israel's actions in fighting terrorism.' He further praised good relations between his country and Israel, including a 'high level of economic cooperation,' stating 'we rely heavily on Polish-Israeli cooperation in the field of defense.'"

"Not all volunteers are created equal. When NINA FINE first offered to help at the Jewish Pavilion, her plethora of talents were unknown. Not only is she a fabulous cantor with a beautiful voice and a vast knowledge of Judaism, but she is warm, compassionate and fun loving as well.

Nina has been leading some of the services on the East-side of town for Jewish Pavilion Director JUDY APPLETON for the last few years. She relates beautifully to the residents and their family members.

"When her son, DYLAN comes and plays the piano, it is an added bonus for all.

"Nina is active at Congregation Ohev Shalom where she also teaches."

(I love to write about good people like Cantor Nina Fine).

On Thursday, April 6, the JCC 39ers will hold a book review directed by LOIS LILLING.

This month's selection is "The Last Secret of the Temple" by Paul Sussman. It begins at 1:30 p.m.

On Sunday, April 2 at 2 p.m., the Congregation Ohev Shalom Seniors will feature The Company Players who will present "Oklahoma in Concert!"

The company will feature songs and scenes from America's original musical theatre hit.

The cost is $5 per COS Seniors member; $8 for all others. Everyone is invited! Refreshments will be served after the show. (I repeat: Oh boy! My cookies!!!)

When I heard that I was invited to the opening night of Disney's "Little Mermaid," I thought... well maybe the kid in me will enjoy it! AND I DID! But I was also made breathless by the fabulous sets and costumes. Wow! Who knew? By the way, the fabulous sets were by KENNETH FOY and the fabulous costumes were by AMY CLARK and MARK KOSS.

And a terrific surprise! Seated just two rows behind me were Dr. HARRY and LEA EISENBERG. They are two wonderful people I was thrilled to meet up with!

(What a great night!)

When I ran into Dr. Eisenberg, I remembered what a fantastic doctor he is and this joke came to mind:

Moshe and his friends Abe, Max and Nathan meet at the mall for a coffee-as they do every Monday. They sit down and Moshe starts to discuss the importance of regular medical check-ups. He asks his friends, "So when did you all last have a medical?" All reply it was years ago. So Moshe tells them of Doctor Myers, a wonderful doctor he went to and who gave him the best examination he's ever had. He suggests they each contact Doctor Myers and book a check-up ASAP. They agree to do so and take down the doctor's phone number.

The following Monday, Moshe asks his friends, "Nu, how went the medicals?"

"After my check-up," says Abe, "Doctor Myers asked me how old I was. I said I was 70 and he said I could expect to live another 30 years. I was so relieved and happy to hear that."

"After my check-up," says Max, "Doctor Myers also asked me how old I was. When I said I was 80 he said I could expect to live another 20 years. You can't believe how fantastic it was for an 80-year-old to hear that."

Nathan is looking very sad and doesn't say anything at first. But Moshe eventually persuades him to discuss how his medical went. "Being older than all of you," says Nathan, "I have been loathe to see a doctor. But when Moshe told us of Doctor Myers, I reluctantly booked to see him. After my check-up, the doctor asked me how old I was. When I said I was 90, he looked at me and said, 'Thanks for coming. Have a nice day.'"