Genealogy success story: The mystery of my great-aunt Helen 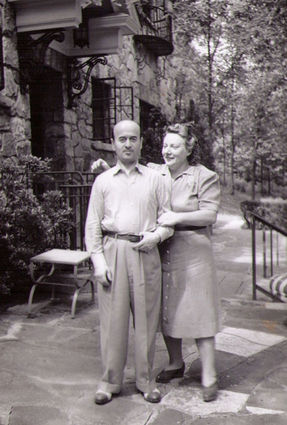 Helen Benton was the younger sister of my maternal grandmother, Rose Rothenberg. My great-aunt Helen was an outgoing person in a family of reserved people. She was always very kind to my family and me. I have fond memories of times spent as a child with "Aunt Helen" and "Uncle Aaron."

We encountered several roadblocks in our quest to unravel this mystery. Our first hurdle was that my mother could not find Aunt Helen's naturalization papers. Was she mistaken about the existence of these papers? My mother, Harriet Signer, who is 95 and lives in South Florida, has an excellent memory. She was absolutely certain that she had Aunt Helen's naturalization papers in her possession at one time.

First, we had to verify that Aunt Helen was actually born in New York like her sister, Rose, my grandmother.

I went to the New York City Municipal Archives and found Aunt Helen's birth certificate. She was born on Oct. 2, 1897, at 200 East 7th Street in Manhattan.

Now I was really perplexed. There were several ideas that circulated around the family to explain our conundrum. Sometime after World War II, Aunt Helen and Uncle Aaron changed their surname from Benowitz to Benton. Also complicating matters, Aunt Helen never told the truth about her age. Was there a relationship between these behaviors and what we had already discovered? The mystery became even greater.

Every step in this journey to determine why Aunt Helen had applied for citizenship, despite the fact that she was born in this country, added more questions and increased the mystery.

I was totally shocked by the final answer to my question. It not only involved Aunt Helen, but potentially many women living in the United States at that time. When I told people what I uncovered, they, at first, did not believe it could be true.

One day at a Jewish Genealogical Society of Greater Orlando meeting, I mentioned to a fellow member/genealogist that I had proved that while Aunt Helen was indeed born in the United States, she had applied for citizenship in 1928! This fellow member of the Society explained that it might have something to do with the fact that she married an immigrant.

I went home that night and, in a short time on the computer, I was able to find the Naturalization Law of March 2, 1907, which stated that a woman's nationality would henceforth be determined by her marital status. Thus, if a woman married an "alien" (as they were then referred to), she would lose her citizenship. Only if her husband applied and was granted citizenship, could she then apply.

This is totally startling by today's standards, but what was even more shocking was that, according to this law, males who married female "aliens" did not lose their citizenship. At that time, it was generally felt that women were subservient to men and their allegiance would be influenced by the thoughts and beliefs of their husbands. In actuality, since women did have not the right to vote at this time, and the most important right of citizenship was voting, it probably was not seen as an important issue.

In 1920, the Nineteenth Amendment to the United States Constitution granted women the right to vote. This created an untenable situation since a naturalized husband could vote but his wife born in the United States could not.

Fortunately, this situation was remedied by the Married Women's Act of Sept. 22, 1922 (Cable Act). From that time, a woman had the right to citizenship of her own that was not based on that of her husband. Those women who had lost their citizenship by marrying a foreigner could regain their citizenship, but it was not automatic and an application was necessary. Therefore, it was not until three years after Uncle Aaron became a U.S. citizen that Aunt Helen applied for citizenship. I was fascinated that in her Petition for Naturalization it states in very small print that with her signature, Aunt Helen agreed "to renounce absolutely and forever all allegiance and fidelity to any foreign prince, potentate, state, or sovereignty, and particularly to "Republic of Lithuania and/or Republic of Poland and/or State of Russia." Ironically, these are countries to which she never had any allegiance in the first place.

This genealogic journey was a fascinating insight into the position of women in the time of my great-aunt Helen, who died at age 85 in 1983. I wish I had known this unfortunate piece of our history when she was alive. I would have asked about her feelings-not about being treated as a second-class citizen-but about losing her citizenship entirely. 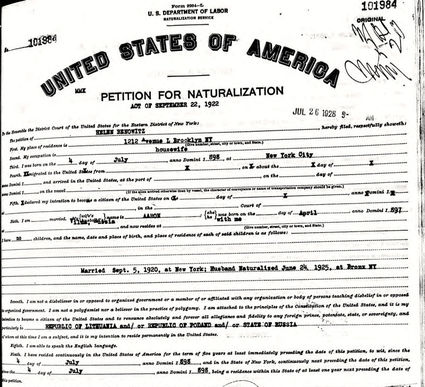 Dr. Richard Signer is a retired pediatric surgeon. He was the chief medical officer of Florida Hospital for Children for 14 years. He lives in Winter Park with his wife, Lainey. He can be reached at rds11544@aol.com.

You can learn how to search JewishGen and other important resources at the Jewish Genealogical Society of Greater Orlando (JGSGO) "My Jewish Roots" workshops. The next workshop is "Jewish Names" featuring JewishGen Managing Director Warren Blatt on Tuesday, May 2, at 7 p.m. at the Roth Jewish Community Center, 851 N. Maitland Ave., Maitland. The workshop is free and open to the public. Bring your own laptop to participate in the lab portion. It is also possible to attend via the Internet. Pre-registration is required. Pre-register for either in-person or online participation at http://www.jgsgo.org/MyJewishRoots.

My grandmother was in the same position. So she and my grandfather got married in another state. Also he lied on the marriage certificate and said he was born in the US. My grandmother was definitely in charge.