What is happening on college campuses? 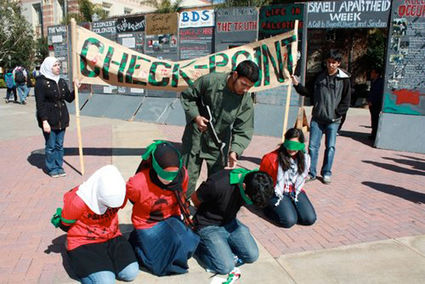 An anti-Israel demonstration at Berkeley.

There's a war going on in the United States. It isn't a battle with weapons that harm the physical body. It's a war of ideology versus truth and logic. And the battlefields are on college campuses.

Americans for Peace and Tolerance, founded by Charles Jacobs and Avi Goldwasser, produced a shocking documentary titled "Hate Spaces: The Politics of Intolerance on Campus" that takes the viewer into the heart of the aggressive methods of "combat" used to viciously attack Jewish and pro-Israel students on American college campuses. The film was recently shown to a full house at Congregation Ohev Shalom and will be shown again at Congregation of Reform Judaism on April 24, at 6:30 p.m. After the film, there will be discussion with producer Goldwasser and guest speaker Rezwan Ovo Haq, a UCF student from Bangladesh and former Muslim Student Association member.

In a telephone interview, Goldwasser stated that the purpose of the film isn't just to educate, but to shock the viewers.

"Anti-Semitism on college campuses and the failure of university leaders to address it is a major 'scandal' in higher education," Goldwasser said.

Jewish students are being mistreated, discriminated against, verbally abused, bullied, and shouted down and the "bullies" are getting away with it. Not since the 1960s have students been harassed because of their identity.

This film he created allows an inside look at the problem by digging into the on-going academic de-legitimization of Israel, the normalization of hatred in the name of social justice, and massive donations of Arab oil money to universities.

"The goal of the film is to change the situation," he stated, adding that informing others of the scandal and corruption in higher education is not a task the mainstream media undertakes.

Throughout the documentary, journalists, authors, political figures, college professionals and students share their views of what is happening.

Who is the archenemy, the "bully," on campuses? Students for Justice in Palestine, commonly called SJP. An anti-Zionist, pro-Palestinian activist organization, SJP was established in 1993 at the University of California, Berkley. It now has chapters on about 200 college campuses. The organizations lure is social justice and equality-causes most American college students would fight for-flying under the radar as "just another student club." But make no mistake, SJP is a hate group. Under the guise of freedom of speech, SJP activists push BDS, change history, spread lies about Israel and verbally abuse Jewish students just because they are Jews.

SJP members boldly call Israel "the Fourth Reich," and a 2013 Holocaust Commemoration at Vassar College was interrupted by SJP students who were shouting "Child murderers!"

"What if someone said to your face the Holocaust never happened? Or praised Nazis?" asked a University of New Orleans student who was attending a Diversity Day event in November 2016.

This is what is happening all across America. Anti-Semitism rallies are held in the middle of college campuses. And very few leaders and faculty stand up for the Jewish students. When they do, as did the president of Northeastern who announced there is zero tolerance for anti-Semitism at the school, they are harassed with protests.

"They have no tolerance to hear another point of view, calling Jews who disagree with them Nazis, oppressors," stated Susan Tuchman, director of ZOA Center for law and Justice.

This is not a comfortable documentary to see. I viewed the film at a private gathering. Beside me sat a Holocaust survivor. She cried as she watched. For her, it was as if she were reliving her life in Europe as the Nazis took power. No, not comfortable at all, but its message is very important and must be heard.

The mistreatment of Jewish students is happening on college campuses, and others stand idly by as if this is a normal occurrence.

"You can't co-exist with people who are there to destroy you," said Caroline Glick, senior editor of The Jerusalem Post.

Anthony Berteaux, a student at San Diego State expressed the dilemma, "To what extent do we allow these student organizations to do what they do and get away with it because we don't want to show bias?"

Once this film is seen, viewers ask the same questions, which is what Jacobs and Goldwasser want: to provoke the viewers to bring about change, to stop the madness.

The free screening of "Hate Spaces" is open to the community. Congregation of Reform Judaism is located at 928 Malone Drive, Orlando. For more information, please contact Lauren Oback at 407-645-0444.

This showing is sponsored by Barry and Donna Render.