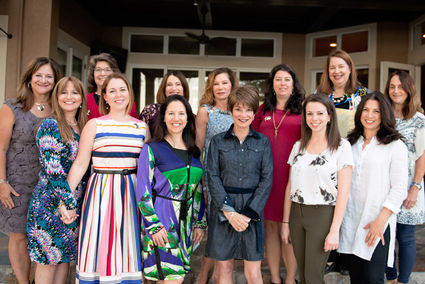 More than a dozen women took part in a March 30 Pomegranate Society event in support of the Jewish Federation.

A group of women dedicated to improving the world gathered March 30 at the home of Betsy Cohen for the annual reception of the Pomegranate Society, part of the Women's Philanthropy division of the Jewish Federation of Greater Orlando. Cohen and Lauren Bloom are co-chairs of the group.

The Pomegranate Society was established in 1981 as a way to inspire giving from women who care deeply about the Jewish people. Today more than 125 Federations participate. The society recognizes a woman's annual gift of $1,800 to $4,999 ($5,000+ giving is recognized as a Lion of Judah).

Last year, the Federation inaugurated its local Pomegranate Society. Since then, 10 new women have joined its ranks. Four of the women were introduced at the March 30 event and honored with a gorgeous silver pomegranate pin, an emblem of the society. The pomegranate was chosen as a symbol because of its significance in Judaism. It is one of the seven species associated with the Land of Israel. There is also a tradition that the pomegranate has 613 seeds, which corresponds with the number of mitzvoth (commandments) in the Torah. The pomegranate has been used widely as a decorative element in Jewish ceremonial art. The silver covers for the handles of the Torah scrolls are called "rimonim" (pomegranates).

The reception featured a Passover food demonstration led by accomplished chef, writer and educator Myrna Ossin, who demonstrated how to make delicious Passover pizza and cookies.

The reception concluded with a conversation about the good work of the Federation in Israel and here in Central Florida. Renee Friedman, owner of FastSigns of Orlando-Central, who became a Pomegranate this year, said she was inspired by her recent trip to Israel, which was co-sponsored by the Federation. Friedman spoke passionately at the reception about her love for Israel and her growing desire to be involved in and give back to the Jewish community.

You can see more photos from the reception at http://www.jfgo.org/pomegranate.