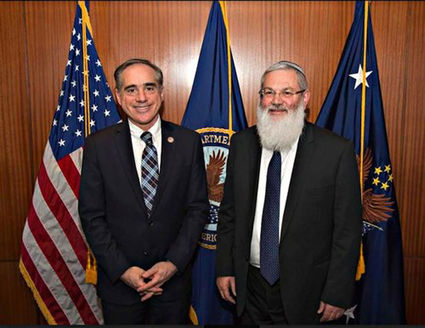 While U.S.-Israel military ties have long been known for foreign aid packages, intelligence-sharing and jointly developed missile defense technology, veterans affairs could be a major new frontier in that relationship.

The seeds of this added dimension to already storied Israeli-American bonds were planted during last year's U.S. presidential election, particularly in the eyes of Israeli government officials tasked with the care of injured and released IDF soldiers.

Israeli Defense Ministry officials point out that then-candidate and now President Donald Trump significantly focused on issues pertaining to veterans on the campaign trail and has maintained that focus in the early months of his administration.

Another relevant development for Israeli leaders is Trump's selection of Secretary of Veterans Affairs David Shulkin, a Jewish doctor and hospital administrator who was unanimously approved by the Senate Feb. 13-no small feat in this hyper-partisan era.

Within weeks, Israeli Deputy Defense Minister Eli Ben-Dahan and his advisers reached out to Shulkin, asking for a meeting. That meeting-the first of its kind between American and Israeli policy officials responsible for the care of injured and released (known as "discharged" in the U.S.) soldiers-took place in late March in Washington, D.C. It also marked Shulkin's first visit with a foreign government official.

"The level of anticipated cooperation brings what has long been a productive relationship [on military affairs], in terms of the purchasing of technology and sharing of information, to a whole new level," Idit Druyan, an adviser to Ben-Dahan, told JNS.org.

"Shulkin is extremely knowledgeable. He was very welcoming to us and open to listening to our ideas. We were excited by his interest in the work he wants to accomplish as well as his interest in our expertise," she added.

In some ways, the systems for working with injured and released soldiers in the two countries are very different. Israeli soldiers' progression from the military health care system to the public system happens at the government level rather than at the individual's initiative, as is the case in the U.S.

Yet there are many similarities in the types of medical issues that arise. Treatment for post-traumatic stress disorder and suicide prevention are of great interest to both nations, and the leaders have agreed to pursue future cooperation on those fronts.

Further, the Israeli leaders have welcomed the idea of the U.S. using Israeli experts for American presentations during international conferences at which Israel itself is not yet participating. Such an opportunity will allow Israelis to showcase their knowledge on a world stage for which they have, until now, largely been denied access.

Deputy Minister Ben-Dahan is a rabbi and served as an officer in the IDF. He continued serving in the military reserves until age 60, and currently has several children serving in combat units. Before moving into Israel's Defense Ministry, Ben-Dahan served as deputy minister of religious services.

Although Sec. Shulkin is not a veteran, he was born on a U.S. Army base in Illinois, where his father served as a military psychiatrist. Shulkin served in high-level management roles at several major medical facilities, including as the president and CEO of Beth Israel Medical Center in New York City.

"The fact that Shulkin is Jewish did, naturally, come up during our Washington meeting," said Druyan, who noted Shulkin "mentioned that he has been to Israel and that one of his children spent a year in Israel."

During the meeting, according to Druyan, Shulkin asked the Israelis about their familiarity with Israel-based ReWalk, a robotics company producing exoskeletons for those with spinal cord injuries. Following the meeting, the U.S. Department of Veterans Affairs this month purchased 28 ReWalk Personal Exoskeleton Systems to support a national clinical trial.

The Israeli and American leaders responsible for caring for their respective nations' soldiers expect to remain in professional contact, and to maintain and increase mutually productive endeavors.