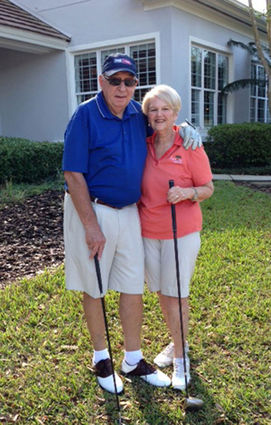 It all began in Valdosta, Georgia, in the late 1960s with a pair of his and her golf clubs. Elise and Henry Schilowitz, took up recreational golf as a way to spend time together, while Henry served out his two-year commission as an OB/GYN in the Air Force. Almost 50 years later, the ball is still rolling, as the community-minded couple and Jewish Pavilion volunteers are honored at the Pavilion Golf Society Tournament on Sunday, May 7. The 5th Annual Event will be held at the Rosen Shingle Creek's newly renovated Arnold Palmer Golf Course in support of the Orlando Senior Help Desk (OSHD). The OSHD a community resource sponsored by the Pavilion at no cost to older adults and their families, providing guidance to seniors and their family members in their time of need.

The active grandparents of six, and parents of three adult children, Ted (Jodi), Steven (Melissa), and Rebecca (Shaun), attribute their youthful energy to their family and community involvements. Relocating to Maitland in the early 1970s, the Schilowitzes have been active in The Jewish Pavilion and a host of other causes including ORT, Temple Israel, and the Orange and Seminole County Public Schools. Additionally, the couple were early (and continued) supporters of the Maitland's JCC. For years, the couple worked together in Dr. Schilowitz's medical practice, where Elise was office manager and Henry delivered "thousands of babies," serving as head of Florida Hospital's OB/GYN Department for several years. When Henry began practicing at Orlando's VA Hospital, Elise retired from the office, moving on to "professional volunteerism."

"In the past decade, Elise has been a leader, mentor, and source of guidance for The Jewish Pavilion, as one of the few people who has presided over both our Boards," stated Nancy Ludin, executive director. Schilowitz has served as Pavilion Friends Board president, president of the Board of Directors, and currently holds the position of Immediate past president. Elise shares that Henry has been a champion of the Pavilion throughout her involvement, and has offered support by attending all major functions, including the annual golf event each year. Additionally, the Schilowitz couple expertly hosts a 'basket assembly' get together each year prior to the Pavilion gala, as they help combine hundreds of donated items into auction packages. Elise notes that Henry has been the unofficial auction "schlepper" for years, hauling hundreds of baskets to the gala locations to help raise funds for the Jewish Pavilion and its Orlando Senior Help Desk.

Both Elise and Henry have been caregivers to aging parents, with their late parents residing at several senior facilities including Oakmonte Village of Lake Mary and the Kinneret Apartments, respectively. The couple has lived the Pavilion's mission first-hand, and feel a communal responsibility to help Orlando's elder community feel connected as they transition to life in assisted living and skilled nursing homes. The Schilowitzes remarked, "It's everyone's goal to live to a ripe old age, and to have a caring community behind you. That's what we love about the Pavilion. As we make elder-care residents feel valued with holidays and visits, we feel good ourselves for being there for someone who might otherwise be alone. The Orlando Senior Help Desk has become an invaluable resource, helping callers make their way through the 'sand traps' of caring for a loved one."