Genealogy Success Story: Wrestling one's way out of the Holocaust 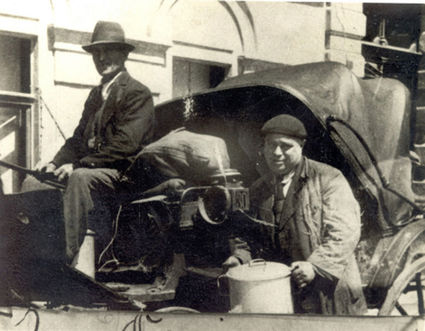 About two years ago, I flew to Israel for the annual conference of the International Association of Jewish Genealogical Societies, held that year in Jerusalem. While in Jerusalem, I toured Yad Vashem, Israel's memorial to Holocaust victims. One of the very powerful exhibits honors "The Righteous Among the Nations"-that small minority who at great risk managed to rescue Jewish people during the Holocaust. YadVashem.org identifies the four major kinds of help that were provided by those few: Hiding Jews in the rescuers' home or on their property; Smuggling and assisting Jews to escape; The rescue of children; Providing false papers and false identities.

I then travelled to Haifa to visit with Yosie and Tova Teitelbaum, with whom I had become acquainted with via email through an Orlando connection. Early on in our relationship, I had learned from Tova the extraordinary story of her father, Jonas Eckstein who did all of the above and more to help what turned out to be over 2,000 Jewish men, women and children in Bratislava, Czechoslovakia (now the capital of Slovakia). Prior to the Holocaust, Bratislava had the largest Jewish community in the country.

Eckstein was the owner of a grocery store, an amateur wrestler in the Hakoach Sport Organization, and a community leader in Bratislava. All three roles helped him in the difficult years ahead, including having excellent contacts with the local police. As a result, he was able to help several thousand to survive after the Nazis arrived. Tova relayed some of her father's story to me in an email soon after we became acquainted:

"The dark clouds began in 1939 when Jews were ordered to pay back taxes, an excuse to confiscate Jewish valuables at that time; in 1940 radios were confiscated, limiting information; in 1941-citizenship of Jews was revoked; in 1942 "It got really bad" with the beginning of the transport of Jews. Following the announcement that Jews would have to help with the war effort, the Gestapo first rounded up 1,000 young Jewish girls and sent them to Auschwitz."

In the process of rounding them up, Jewish men were "enlisted" to renovate two abandoned buildings into holding places for those to be deported. As a former wrestler, Eckstein must have been a natural for the task.

The leaders of the Jewish community in Bratislava obtained permission for kosher food to be brought to the two "assembly" points-Goring Lager and Patronka-for those being deported to Auschwitz. Eckstein, as a grocer, and his brother, Shumel, both active in the Jewish community, were allowed to bring food to the two locations. Under pain of death, the Eckstein brothers were not to talk/communicate with the prisoners in any way-no letters, notes, addresses to be exchanged. Many years later, Tova met a woman who had been kidnapped off the street in Bratislava at the age of 16 and brought to one of the two assembly points. The woman never forgot. Eckstein was able to sneak word to her family and they were able to ransom her the next day. Unfortunately, Eckstein's brother was caught bringing out a note. "He and his family were arrested and taken to Auschwitz because he did the most terrible thing, he tried to help someone else."

Eckstein determined things were in a downward spiral, as people were being kidnapped off the streets. As Tova described, "He rescued many Jews, not by providing them with visas, but by physically hiding them in a bunker under our house. There were always 50 or 60 people living there at any one time He provided them with food and water and other necessities of life at a daily, hourly, minute-by-minute risk to his life. He did this rescue operation for a good many months. Besides bringing the physical necessities, he always had a good word, a joke, and most important, news from outside. I also was informed that there were bunkers in other parts of Bratislava, including one under the main synagogue."

While Eckstein wasn't responsible for those bunkers, he took it on himself to bring food to the occupants, again at great risk.

After Tova, the Eckstein's first child, was born in a Jewish hospital in Bratislava in 1942, her mother, Valerie (nicknamed Wally), worried for their safety and fled with newborn Tova before night fell. "I don't know where my mother went when she fled the hospital. She later often said that of those who stayed overnight no one survived."

In 1943, leaders of Bratislava's Jewish community were brought together and cautioned that they had to avoid the fate of Jews in Poland. Word was "leaking" to the Jewish Underground in Slovakia from concentration camp escapees describing the mass exterminations. Under the leadership of Rabbi Michael Weissmandl, $50,000 was "scraped" together from the Jewish community, including about $25,000 given by Shlomo Stern of Bratislava. Tova learned from later testimonies that it was actually her father who was sent alone, with great trepidation, to hand over the bribe (untraceable cash) to German and Slovak officials. And, she learned, "The deportations did not stop, but it did become easier to walk on the streets without fear of being kidnapped off the street."

The mass deportations of Jews abated for two years-from 1942-1944. And, important to note, it was only after the bribe had been given that it became possible to rescue children from Poland. At that time, Jews were safer in Slovakia than in Poland, where only 10 percent of the Jews survived the genocide. Between a number of dedicated Slovak and Polish Jews, Polish Jewish children were smuggled into Slovakia and then on to Hungary/ Rumania and eventually to Palestine. As Tova later learned from survivor testimonies, "Most of the children were brought to our house to recuperate till it was possible to move them on."

Once Ecksten was picked up and jailed because the Gestapo suspected that he knew the whereabouts of four Polish refugees who had crossed into Slovakia. Eckstein was beaten and put in solitary confinement. After a couple of days they arrested his wife, Wally. She was also beaten and put into solitary confinement. Both kept silent. Eckstein was let out by concocting a ruse to help them catch the escapees-saying they stole from him and he wanted to catch them, too. Eventually both were released.

At some point, Eckstein realized that it was too dangerous for anyone, including the family, to stay in the bunker because of frequent patrols by the Gestapo. Eckstein with Wally, Tova and another cousin, Ester Eckstein, sought refuge with the Payankos, a Christian family living in Lamec, a small village outside Bratislava. Because it was difficult to hide a child in a confined space, the Payankos eldest daughter, Manya, took Tova out of the house. As a train engineer, Payanko was able to provide Manya with a free pass on the Czech railroad. Manya spent days travelling around the country with little Tova.

"Manya made me lie down and pretend that I was asleep so that people shouldn't bother us. In retrospect-how long can you ask a two-year-old to pretend to be asleep? Manya did this for weeks."

Manya then returned to Lamac and told the neighbors that she had come home with her illegitimate child.

Around Oct/Nov 1944, Eckstein and Wally left their hiding place somewhere in Lamac because there had been a rumor that the war was coming to an end and it was safe to return to Bratislava. It turned out not to be true.

"A Nazi called Alois Brunner named my father on a personal list as someone who had to be found and sent to a concentration camp."

Her parents were picked up and taken to Theresienstadt, which was a "camp-ghetto" where Czech Jews were interned pending transport to killing centers in Germany, Poland, etc. It also served as a ghetto-labor camp which was used for propaganda purposes as a place where certain Jews, based on their celebrity or skills, were presented to the outside world as a part of a "model Jewish settlement" where Jews were deployed for productive labor. Being a former wrestling champ may once again have paid off for Eckstein.

"My parents were in Theresienstadt the last six months of the war in a special section where couples were allowed to stay together as husband and wife. One of my father's cousins was with them as well. This was very important and considered a privilege. To be separated would have been very demoralizing, because you didn't know what had happened to your family and usually lost the will to live."

Tova's parents remained in Theresienstadt until liberation by the Russians in May 1945. They returned to Bratislava and then went to Lamec to retrieve Tova. While the family had hoped to move to Israel from Bratislava, they were unable to get the proper documents and so moved to Australia in 1948, where Eckstein opened a poultry store. Tova eventually went to college and married in Israel, and now lives in Haifa.

While Tova's father had written a partial autobiography, her mother had told her not to read it.

In 1966, the Czechoslovakia Olim organization held a large event in Tel Aviv with hundreds of people attending. Eckstein flew in from Australia to attend. This was the first time Tova began to understand the breadth of what her father had done.

"Many left testimonies and letters of thanks, so I started looking for these people. There were also a number of articles in the newspapers at the time. During a conference "Jews Saving Jews" about six years ago, Tova again discovered attendees who could say that they or their parents had been saved by her father. Tova "convinced" some of the survivors to talk to her by asking, "Is it right that there was no written record of what my father had done?" 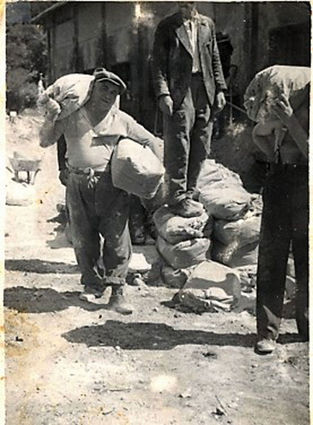 Jonas Eckstein as part of the forced labor force when the Jews were compelled to enlarge and renovate Patronka, an abandoned factory in Bratislava.

"Yad Vashem was most unhelpful and I can say totally uninterested. A small interesting place called Haginzah in Bnei Brak was very helpful. They even had a file on my father. One person seemed to lead to another."

After being contacted last year by the U.S. Holocaust Memorial Museum, Tova provided them with pictures and information on her family to include in their large collection, all available on their website.

After decades of discoveries, "What I learned above all: My father himself often didn't know how much and what his next portion of food would be, but whatever he had he was willing to give away to someone in greater need. I have tears in my eyes as I am writing this, my father was an incredible person!"

If you would like/or have more information on this rescue effort in Bratislava, please write Tova at teitel_j@netvision.net.il.