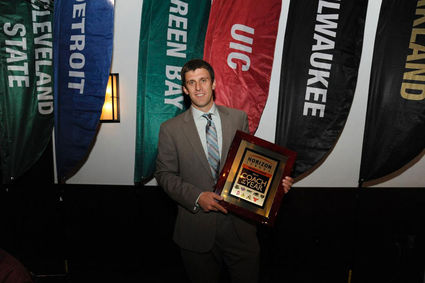 Former Heritage editor, Mike Etzkin, is a proud uncle. His nephew, Brian Etzkin, is the "winningest" head coach of the men's and women's tennis teams in history at Cleveland State University.

Etzkin's work was cut out for him when he came to Cleveland as head coach in 2002. Both the men's and women's teams were, in his words, two "of the worst teams in the country."

During his first year he brought the men's team to nine wins-six more than the previous two years combined. And since that beginning, Etzkin has built the men's tennis program to one that has earned a spot in the Horizon League Tournament every year-winning the tournament five times (2008-2011 and 2013 seasons).

The men's team has also gone to the NCAA Tournament five times-another first for CSU.

The women's team, which was at 2 wins-27 losses the first year he coached at CSU, is now one of the top teams in the Horizon League. Under Etzkin, the women have 11 winning seasons.

Last season, Etzkin had his 200th career victory with the men's team (one of only two Horizon League coaches to reach this milestone), and his 175th with the women's.

A graduate of Lake Brantley High School in 1994 (and No. 1 in singles tennis there), Etzkin went to Southern Illinois University-Carbondale, where he majored in psychology and minored in coaching. He received his master's in sports management at Western Illinois University. Then in 2000, he became the assistant men's coach at Michigan State. All of this experience prepared him to bring these two programs to the top of their leagues, and garnered him Horizon League Coach of the Year three time for the Men's team (2007-2009 and 2010) and four times for the women's team (2004,2011,2014 and 2016). He also was named the 2009 ITA Midwest Regional Men's Coach of the Year.

In addition to his coaching skills, Etzkin encourages his players to look beyond the court and become community leaders. As a result of his encouragement, five women's team members became involved with the Cleveland State Student-Athlete Advisory Council.

Even though his parents, Dr. Allan and Bunny Etzkin; Uncle Mike; and cousin Robbie Etzkin (executive director of The Roth Family JCC), and the rest of his family still reside in the Orlando area, Brian and his wife, Holly, and son, Aaron, love living in Cleveland, where he was born.