Genealogy Success Story: How great it is to have a rare last name 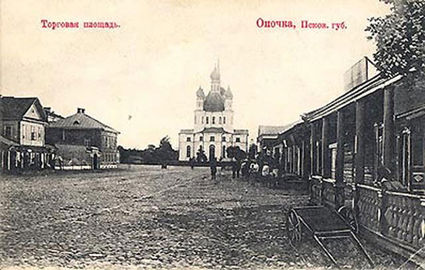 A postcard of the town of Opochka.

How great are those who invented the Internet and Facebook!

I was born in Leningrad, USSR (now St. Petersburg, Russia) and lived there until moving to the U.S. in 1990. Before World War II, the family home was in the small town Zapadnaia Dvina where my grandfather, Josef Gessel (born 1898), lived with his wife and two sons: Isaak (my father, born 1926) and his brother, Michael (born 1928). The town is located in the middle between the Latvian border and the big city Tver. During World War II, my grandfather was drafted into the Navy as a private and was killed on May 13, 1942. My grandmother and her two sons (my father and his brother) were evacuated. They were sent 1,000 miles East to a village in Udmurtia, a Russian republic. A year later, my father joined the Navy at the age of 17 and served in the Far East. In 1945, at the age of 19 and near the end of the war, he was badly wounded. After treatment in a famous military hospital in Moscow, he was considered disabled and discharged from the Navy. It was impossible for the family to return to Zapadnaya Dvina-the town had been completely destroyed, according to relatives who returned there after evacuation and had to live in dugouts. Instead, my widowed grandmother with her two sons moved to Leningrad where they had relatives.

My father married my mother in 1953. When I was 11 or 12 years old he told me that our last name is extremely rare, and I accepted that he didn't have any relatives other than his younger brother. On my mother's side, though, I had many relatives. By this time, I had read novels by Sholem Aleichem with depictions of huge Jewish families, and I had some knowledge about the Holocaust, but stupidly didn't connect the dots. My mother and father told me that the family lost only three members during World War II, and I took them at their word.

In 2012, my daughter asked me to put in writing what I remember about our family history. By this time, my parents were deceased and I had nobody to ask. I set to work. On a memorable day for me-July 5, 2013-I decided to look on Yandex (a Russian search engine similar to Google) for a Russian Ministry of Defense website. I was hoping to just find the date when my grandfather, Josef Gessel, was killed in a World War II battle. I typed "Gessel" in the search line and my life then turned upside down for several years.

What I found was a deluge of information. Of course I began to read all links about "Gessel." I quickly found a Russian webpage, similar to JewishGen.org's FamilyFinder, for people looking for family members. A lady with the last name Gessel wrote me that she knew the name of the town where the Gessel family lived before World War II-Opochka-and that about 30 family members were killed by the Nazis. For the whole day I could not stop shaking like a leaf. At night I was screaming: I saw a kind of cloud of black despair of family members dying in Opochka.

Since that day, I have spent an enormous quantity of time in front of my computer. I registered on many Russian websites for genealogy research (not much success). I looked into Facebook and Russian social networks for the last name Gessel. I found about 2000 profiles (not necessarily 2000 people, as some people have more than one account). I sent messages to most of them, but only received about 20 answers. I discovered that there are three groups of Gessel in Russia: Jewish, German and Russian. Almost all Jewish Gessel whom I found came from Opochka. However, according to the Opochka 'census' and archives of Yad Vashem museum in Jerusalem, only 64 Jewish men, women and children lived in Opochka in 1863, and 13 of them had the last name Gessel!

In the YadVashem.org archives, I discovered one extremely important opportunity. Yad Vashem has collected information on millions of Jewish victims of the Holocaust. Four and a half of the six million Jews murdered by the Nazis and their accomplices are commemorated there. When you read a record from Yad Vashem, with one additional click of the mouse you can see the scan of the original application, signed by the applicant. The applications for 25 members of the Gessel family from Opochka were filled out by one person: Minna Efros, a Gessel granddaughter. I tracked Minna down in St. Petersburg, Russia. She and several of her living cousins provided priceless information about their Opochka Gessel Family Tree.

Opochka, which is situated about 15 miles from the Latvian border, was taken by the Nazis just two weeks after the beginning of the war with USSR. According to the Yad Vashem archives, only 89 Jewish citizens of Opochka (including four people who belonged to the extended Gessel family) were evacuated from the town by Soviet authorities. The rest of the Jewish population, a total of about 200 people, were left helplessly and hopelessly behind and were killed by the Nazis.

I was to discover that I didn't belong to the clan who lived in Opochka. I belonged to the branch of Gessel who lived in Zapadnaia Dvina, the town situated 140 miles to the East of Opochka. Zapadnaia Dvina was taken by Nazis two and half months after the beginning of war with the USSR. But, the local government had come to its senses after the initial shock of the unexpected beginning of the war between Germany and the USSR and evacuated almost all the Jewish population of Zapadnaia Dvina (about 400, according to Yad Vashem archives). Only three Jews were murdered there by Nazis.

Minna Efros recommended a local historian from Opochka who in 2011 published an article about Jewish life in Opochka. He found lots of documents for me in the Russian archives, including many relevant to my mother's family history.  Most important, he found a document, proving that my great-grandfather, Mordukh Gessel, had originally lived in Opochka before moving his immediate family to Zapadnaia Dvina. The document also named Michael Gessel, my grandfather's brother. I found him and his family in the Yad Vashem archives. According to Yad Vashem, Michael Gessel had settled in a town close to Opochka. With some difficulty, I eventually found the phone directory of the town. I was sure that Gessel family had left this town ages ago, as survivors moved away from Opochka and Zapadnaia Dvina either during or after the war. But there was a phone number in the directory for the last name Gessel. I called, hoping to reach descendants of Michael Gessel, but to my great surprise, I discovered it is the family of Ilia Gessel, the third son of my great-grandfather Mordukh Gessel from Opochka. Both Michael and Ilia, brothers of my grandfather Josef, had extended families, and I was able to locate several members of those families.

Searching the Russian Ministry of Defense archives for Gessels, I found about 50 who fought for the USSR during World War II, eight died in battles (including my grandfather). Of the 50, 16 were Jewish, most belonging to the large family from Opochka.

Putting together all of the information I found in various archives, I now have a list of 80 Jewish Gessels, of whom about 70 had lived in or had roots in Opochka. Of the 70, at least 37 were killed in Opochka. At least one Gessel died during the siege of Leningrad; one joined a partisan group and was executed by the Nazis; and eight Gessel were killed in battles of World War II. Of this list, I now know the names of 30 Jewish Gessel who were born before World War II and survived the war.

I spend almost all my time after work continuing my search-adding branches to the Gessel Family Tree which I previously didn't know existed. I'm getting more and more information, the draft of my family history is growing. I'm planning to begin to talk to my Gessel correspondents about a DNA test, hoping to find DNA connections between different branches of Jewish Gessels.

Do you have unanswered questions about family lost during the Holocaust?

Attend the free upcoming JGSGO Workshop "Holocaust Research," presented by Marlis Humphrey, president of the International Association of Jewish Genealogical Societies, Thursday, June 8 at 7 p.m. at the Rosen JCC on Apopka Vineland. Mavens will be available to help you get started. Pre-register for the Workshop at http://www.jgsgo.org/MyJewishRoots.