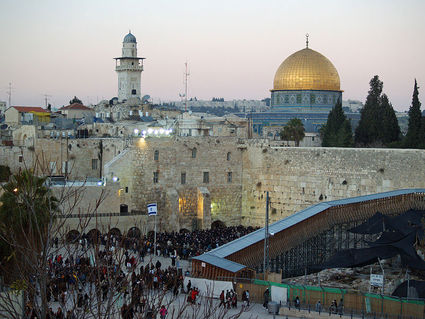 The Temple Mount and the Western Wall.

The Conference of Presidents of Major American Jewish Organizations has welcomed a clarification from President Donald Trump's Administration that it does not regard the Western Wall in Jerusalem as a "part of the West Bank," contrary to earlier media reports.

"We were dismayed by press accounts earlier today reporting that, in response to a request that Prime Minister Netanyahu accompany President Trump when he visits the Western Wall in the Old City of Jerusalem, unidentified U.S. officials said the Kotel was not in Israel and is 'part of the West Bank,'" said Stephen Greenberg, chairman, and Malcolm Hoenlein, executive vice chairman/CEO, of the Conference of Presidents, in a statement.

The statement from Greenberg and Hoenlein included a separate clarification from the Trump Administration. "The comments about the Western Wall were not authorized communication and they do not represent the position of the United States and certainly not of the president," the White House was reported as saying.

Earlier, Israeli media outlets reported that an unidentified senior member of the president's advance team had snapped at an Israeli official that the Western Wall, or Kotel, is "not your territory. It's part of the West Bank." The exchange allegedly took place as the U.S. official rejected a request that Israeli Prime Minister Benjamin Netanyahu accompany Trump when he visits the Western Wall during his visit to Israel next week.

Israeli officials were reported to be "shocked" by the comment, which came as David Friedman, the new U.S. ambassador to Israel, visited the Western Wall on May 15-his "first stop," as a tweet from the U.S. Embassy pointed out.

Greenberg and Hoenlein concluded: "This incident underscores the terrible damage caused by serial UN resolutions, including UN Security Council Resolution 2334 (of December 2016), denying the more than three thousand years of the Jewish connection to Israel and the holiest sites in the Jewish religion, which the Trump Administration has said it will work to reverse."