Genealogy Success Story: A special branch: The tale of a cherry leaf 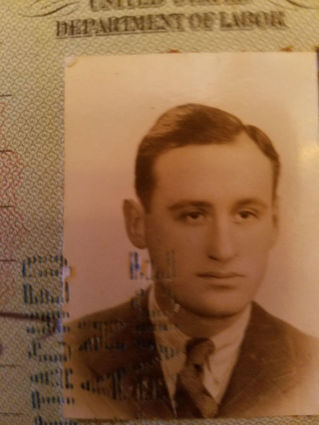 Laura Kerben LaBoda's father's Green Card, which he had in his safe.

I became involved with the Jewish Genealogical Society of Greater Orlando (JGSGO) for several reasons. As a second generation American, I heard my father's Polish accent and wondered what happened to all his relatives. I also wanted to know more about my father's forebears. Who was my great-grandfather and where was he from?

My grandfather, Morris Kerszenblat, already middle-aged, immigrated to the U.S. with his wife, Manya, and four sons including my father, Abe, (an adult-age 24). They made their voyage safely in the spring of 1938. Thanks to Manya's brother, Harry, the immediate family was able to secure visas from Warsaw, Poland, to the U.S. He secured these visas at a time when the doors for Eastern European Jewish immigrants were closing. I was told that the only Kerszenblat survivors were my father's immediate family-grandfather, Morris; his wife, Manya; and their four sons, Abe (24), Jerry (21), Henry (18) and David (4). Any surviving extended family was unknown to me.

The Kerzenblat family first settled in the Bronx where they were employed at Harry's hat factory. The oldest three brothers soon enlisted in the U.S. Army. My family became divided during WWII when my grandparents moved to Orlando with their youngest son, David. After WWII, my father also settled in Orlando, where he married my mother, Freda. Both my Uncle Jerry, the father of my first cousin Barbara, and my Uncle Henry remained in New York.

I knew that my maiden name Kerben had been anglicized. My father had kept his Green Card and passport, which revealed his original surname, Kerszenblat. Using novice skills learned through the JGSGO, I searched ship records for any Kerszenblats and found only those for Morris and his immediate family. My husband and I joined Ancestry.com. There we discovered a family research Message Board. We posted a request for information related to the Kerzenblat (Kerben) family. Fortunately, the post was read by a second cousin, who relayed the message to his mother, Barbara, my first cousin who was married with a different surname and living in Long Island. Barbara contacted me and we reunited in Melville, New York, spending hours talking and going through family albums her mother had kept. The album included a group photo of the family. I recognized my father, grandmother, and Uncle Jerry, however there were at least six other relatives that I did not know. Even when our parents were living, it was difficult to discuss their past life in Poland. Neither my father, Abe, nor my Uncle Jerry wished to discuss details of life in Europe prior to WWII or family members left behind.

Because my cousin Barbara lived in New York, she met a wider circle of immigrant relatives. While talking with Barbara, I asked if she knew of any Holocaust survivors on the Kerszenblat (Kerben) side. She remembered briefly meeting cousins in 1958 who had recently emigrated from Palestine to the Bronx. Barbara could not recall their first names, however, she did recall two most significant bits of information. The first, that the family had relocated to Atlanta, and, most significantly, that the surname had been changed. As many JGSGO members know, a change in surnames can throw a monkey wrench into tracing any lost relative. Barbara fortunately remembered the new surname. The surname was no longer Kerszenblat but had been changed to Duvdevani. I returned to Orlando, googled "Duvdevani" and found it a popular international name. I narrowed the search to the Atlanta area. Using 411.com we located a possible address in Dunwoody. Also included as residents of the address were a Shulamith and Joseph Duvdevani. We called the phone number of record but unfortunately, the phone was out of service. We pursued our search using Google, typing in Shulamith and Joseph Duvdevani. We learned that both Shulamith and Joseph were deceased. I felt that I had again reached another brick wall until my husband, Barry, came to the rescue. Barry showed me a reference for a Yahrzeit donation made in memory of Shulamith by one Avi Duvdevani of Northern New Jersey. From this information, my husband inferred that Avi was most likely Shulamith's son or grandson. I now felt more optimistic that we had a substantial lead in locating a lost relative, but still I did not know the family relationship, if any. Typing "Avi Duvdevani" in a web search led to a LinkedIn reference. I was astonished. As I looked at the profile picture it was as if I was looking at a picture of my grandfather Morris! I attempted to make my first contact with Avi through his LinkedIn address. The message was a success. Avi Duvdevani responded quickly confirming that we were related. His grandfather, Isaac, and my grandfather, Morris, were brothers! He too remembered meeting Barbara along with my uncle Jerry and Henry soon after arriving in the United States. After establishing the fact that we were related, I asked Avi, a delicate, but important question, "How was it that his father, Joseph, managed to survive the Holocaust?" Avi related his father's tale of survival flashing back in time to 1939. The story unfolded with Avi telling an unbelievable tale of cunning, timing, and luck.

Soon after Kristallnacht, Isaac Kerszenblat's millinery store was ransacked and destroyed. Isaac told his 16-year-old son, Joseph, that he needed to immediately leave Warsaw. Joseph heeded his father's advice and traveled to the eastern half of Poland, where he was arrested by Russian authorities and jailed. Joseph was released to Polish authorities where he became a soldier in the Free Polish Army. The Polish Army, now exiled in Russia, was under both the Russian and British command. Given the choice, Joseph Duvdevani decided that as a soldier he would rather be under the command of Montgomery than Stalin. The Polish army, marching on foot and riding in tanks, passed from Russia into Persia, then into Iraq and finally to Palestine. After training for desert warfare in Palestine, the Free Polish Army with Private Joseph Kerszenblat left Palestine to fight in Egypt. Joseph Kerszenblat had better plans. Why not become an Israeli soldier rather than remain with the Polish Army? Joseph quietly left Egypt and the Polish Army, finding his way back to Palestine. Having "jumped ship," he became a wanted man by the British. To evade capture, he changed his name: Joseph Kerszenblat became Joseph Duvdevani. I asked Avi why his father selected the surname Duvdevani. He replied, "The Yiddish Kerszenblat and the Hebrew Duvdevani mean the same thing, they both translate to "cherry leaf" in English!

Joseph, still a soldier but now in the Israeli Army, proudly fought in the 1948 War of Independence, married Shulamith and started a family. Joseph, weary of the sand and guns, contacted a distant relative and immigrated to the U.S. with his wife and two children, Avi and his older sister. I was amazed to discover that I now had cousins I never knew existed! 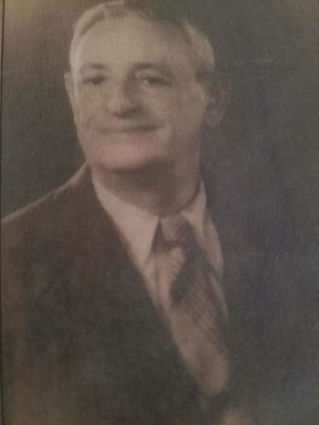 I had many questions to ask my new-found cousin, but decided it best to limit my questions until our next conversation. However I had another important question, did Avi know the name of our great-grandfather? Unfortunately, he did not recall it but Avi gave me an important lead. He noted that his father, Joseph, had given testimony to Yad Vashem. My husband and I decided to pursue this new lead. Searching the Central Database of Shoah victims, we found Joseph's Page of Testimony. The pages included both relevant and sad information. Joseph submitted the testimony in Hebrew where his surname was recorded and translated as Duvdevani and secondly misspelled in translation as Kershenblat. My grandfather's brother, Isaac, was listed in the Hebrew as Yitzkhak and also as Izak. He had been murdered in Auschwitz. His grandfather, as recorded by Joseph, was named Benjamin and was married to a Breina Veintraub. They had also perished in the Holocaust. I had found the identity of my great-grandfather but unfortunately had also discovered his fate. The discovery was bittersweet. Like many descendants of Holocaust survivors, it is stories like Joseph's that give us hope. My cousin Barbara has also contacted Avi. We all hope to meet soon and catch up on many years, if not a century of information.

Truly an amazing story. Multiply yours by the millions of others and we will always remember not only those we lost, but to also understand the incredibly rich historical tradition our people represent. Thank you for sharing yours.