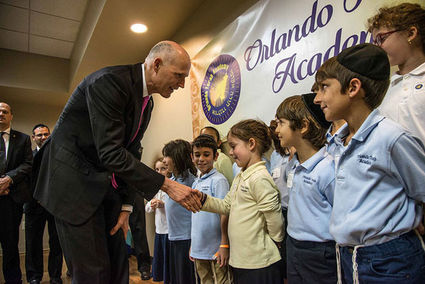 Governor Scott talks with several Orlando Torah Academy students during his visit to the school.

For the first time ever, the State of Florida, led by Governor Scott, will be providing $654,000 in funding for the security needs of Jewish schools throughout Florida. The money will be used to install security cameras, bulletproof glass, alarm systems and to provide security officers. The governor took a tour of the school building and got to meet and shmooze with the children of OTA who were very excited to meet him. Rabbi Avraham Wachsman, Dean of Orlando Torah Academy, began the press conference and spoke about the importance of Florida's Tax Credit Scholarship, which provided scholarships to more than 100,000 children this year, including 2,400 students in Jewish day schools. He continued by thanking the governor, Rep. Fine and the Florida Legislature for their support of the new groundbreaking security measure. He also recognized Teach Florida, a project of the Orthodox Union, for spearheading the campaign for security and equitable funding for nonpublic schools.

After Gov. Scott was introduced and he explained to the students why they should strive to be governor one day (privileges such as pizza whenever you want, ice cream whenever you want, and getting to meet kings and queens!), he commended and thanked Rep. Fine for championing the initiative. He then pointed out that "It is hard to learn if you don't feel safe," and we've all seen the unfortunate incidents and the rise of anti-Semitism of late and "there is zero tolerance for that, there is zero tolerance for anti-Semitism and anti-Semitic acts."

The governor also told the kids standing at his side that they can be anything they want to be in life, including governor, and even president of the United States.

Mayor Dyer thanked Gov. Scott for providing additional means to keep the children of Orlando safe and for choosing Orlando as the location to speak out against hate.

Rep. Fine added, "As a Jew and as a father, I believe that every student has the right to go to school in a safe and secure environment."

At the conclusion of the press conference, the governor posed for pictures, spoke with the students of OTA again and took questions from the press.

Last week, Gov. Scott met with leaders at The Roth Family Jewish Community Center to pledge his support in the wake of the anti-Semitic acts.

Since the beginning of the year, the Jewish Academy of Orlando; The Roth Family JCC; and the Orlando Jewish Day School in Dr. Phillips, which is operated by Chabad of South Orlando, received numerous bomb threats.

"That's not acceptable in the United States of America," Rep. Fine said. "No child should have to go to a school where they feel unsafe."

"This is just the beginning," Scott told the group at OTA. "I will work for all our children to be safe, public or nonpublic. If anybody is the subject of threats, we should look into how to protect them. We have to work on keeping everyone safe."

"Security in school is a public good that merits public support," said Mimi Jankovits, executive director of Teach Florida. "We commend Gov. Scott and the Florida legislature for this funding, and for this important first step to providing safe schools for all Florida's students."

To see more pictures of the historic event at OTA visit http://www.orlandotorah.com.