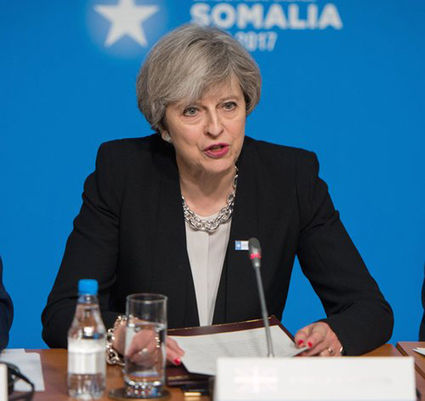 After Saturday's London Bridge terror attack, U.K. Prime Minister Theresa May (pictured) vowed to crack down on the 'evil ideology of Islamist extremism.'

Following Saturday night's terror attack that killed seven people and injured as many as 50 in London, British Prime Minister Theresa May said "enough is enough" and vowed to crack down on the "evil ideology of Islamist extremism."

In response to the U.K.'s third major Islamist terror attack in recent months-prompting May to describe the attacks as a "new trend"-the prime minister asserted, "We cannot, and must not pretend that things can continue to carry on as they are."

During remarks delivered Sunday in Liberia at the conference of the Economic Community of West African States, Israeli Prime Minister Benjamin Netanyahu said, "In recent hours, another terrible attack was launched on innocent people in the heart of London. We condemn it."

He added, "We send our condolences to the British people and we pledge our commitment to fight this scourge-this scourge that knows no bounds. These terrorists worship death. They murder indiscriminately, but they will not frighten us. They will not terrorize us. They will only harden our resolve to defeat them. Here in Africa, the Middle East, Europe, everywhere-together, we will defeat them faster."

Saturday's attack began on the London Bridge, when a white van veered off the road at 50 miles per hour and plowed into crowds of pedestrians, hitting at least six people. After the speeding van crashed into a fence by Southwark Cathedral, three men armed with hunting knives exited the vehicle and embarked on a stabbing rampage throughout crowded bars and restaurants in the nearby Borough Market, attacking anyone within their reach.

The attackers also appeared to be strapped with suicide bomb vests, which Metropolitan Police counterterrorism chief Mark Rowley later determined to be "hoaxes." Multiple British media outlets reported eyewitness accounts of the terrorists shouting, "This is for Allah." One eyewitness reported seeing a woman being stabbed "10 or 15 times" by the attackers shouting the Islamic proclamation, the BBC reported.

During a police raid Sunday on an apartment owned by the one of attackers, 12 people were arrested in connection with the terror attack. In the wake of the attack, the U.K.'s ruling Conservative party and opposition Labour party both announced a suspension in national campaigning ahead of the June 8 British general election.

London Mayor Sadiq Khan, meanwhile, called the incident a "cowardly attack on innocent Londoners and visitors to our city enjoying their Saturday night."

Israeli Strategic Affairs Minister Gilad Erdan wrote on Twitter, "This was an attack not just against the U.K. but against Western values and democracy. Our prayers are with the victims."

Islamic State had also claimed responsibility for the May 22 suicide bombing during an Ariana Grande concert at the U.K.'s Manchester Arena, killing 22 people and injuring 59. At the time, Erdan noted the similarity between the incident and Palestinian terror attacks in Israel, writing on Facebook, "Terror is terror, in Jerusalem, Paris or as we unfortunately see again, this time in Manchester."

In March, a British convert to Islam carried out a terror attack on London's Westminster Bridge when he rammed into pedestrians, killing four, and then stabbed a policeman to death outside the British Parliament building.

From Israel to Europe, the use of knives and vehicles-as alternatives to explosives and firearms-has become a preferred method for terrorists in recent years, particularly during the Palestinian "stabbing intifada" against Israeli Jews in 2015 and 2016.

In her condemnation of Saturday's terror attack in London, British Prime Minister May said "terrorism breeds terrorism," and that terrorists often mimic each other in ideology and method.