CRJ puts the Arts in the spotlight 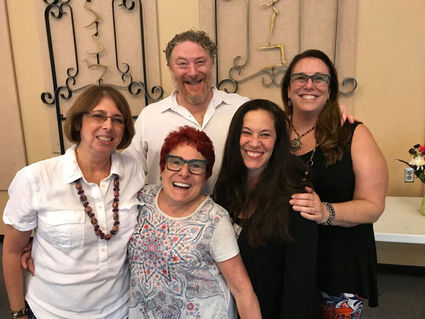 At the end of May 2017, the Congregation of Reform Judaism hosted their first-ever Arts Festival Week that included an art gallery, a variety of free arts workshops, and multiple performances. Each featured the talents of local painters, sculptors, photographers, craftspeople, singers, both classical and modern musicians, creative writers, and even a couple homegrown comedians. Yet, if you had asked anyone at the temple if that kind of response would be possible just one year earlier, the reply would have been, "Take it easy there, tiger. Let's just see if anyone shows up to a meeting."

The CRJ Arts Festival Week started over coffee between Cantor Jacqueline Rawiszer and a congregant who relocated from the hustle and bustle of the entertainment industry in Hollywood to Central Florida for a job teaching screenwriting classes in the Creative Writing MFA program at Full Sail University. The cantor asked the educator and former performer to spearhead a new arts committee at the shul with the hope of launching some kind of entertainment performed by and for the temple membership. Little did these two art enthusiasts know they had just founded CRJ's Cultural Arts Collective.

Even though both of them only had personal experience with the performing arts, they opted not to limit the purview of the committee to any specific type of art. All artists were invited to bring their talent to a casual meeting where an accompanist was provided. Singers sang, actors did monologues, musicians brought their instruments, fine artists showed and discussed their paintings, and a comedienne attempted to teach everyone gibberish. The variety was a revelation.

Leaders stepped forward. Event chairwoman, Jill Goldsmith, took up the monumental task of organization while Cathy Lieblich coordinated all the volunteers it took to manage the weekend. Nina Chatham stepped up as the art gallery curator and orchestrated the gallery opening. The Hollywood writer stepped forward to spearhead the performing arts cabaret. Jean White organized the workshop schedule featuring classes in collage, fine arts, and creative writing to name a few. Judith Lazev, the temple's art educator, put together a religious school-wide art project, involving the congregation's youth. Gary Borenstein, a community graphic and media artist, did the artwork for flyers and posters. Cantor Rawiszer made sure everyone received a spotlight, directing the CRJ's Got Talent variety show. Classical guitarists and cellists, comediennes, Shakespearean monologues, sung original guitar duets, Broadway show tunes, and a little rock and roll were featured.

Most importantly, no Jew could forget the culinary arts. Leni Puccio lead the charge to create a series of wonderful bite-sized foods to punctuate the gallery opening and the Sunday arts day. 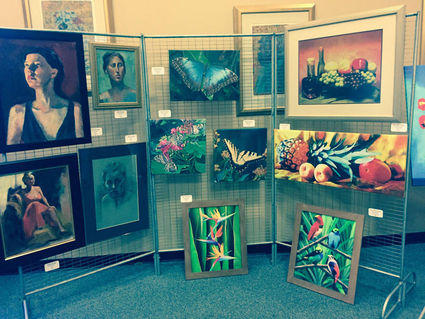 Artwork in the Art Gallery.

One of the most meaningful aspects of this week was highlighted by how all the artists supported one another. They attended one another's workshops, came to each other's performances, and reminded one another that what they do is beautiful. For what started out as a very modest undertaking, the arts festival team hopes this is only the first of many more to come.

If you're interested in hearing more about the CRJ Cultural Arts Collective, register here: https://crjorlando.org/cultural/cultural-arts-collective/.

Michael Tabb is a member of the Congregation of Reform Judaism and the Hollywood writer mentioned in this article. He currently has a film in production for Universal Studios and is developing a TV series with producer Sean Daniel and Evan Spiliotopoulos. He is an instructor at Full Sail University, where he teaches screenwriting in the Creative Writing MFA program. Read more about Tabb at http://www.michaeltabbwga.com.