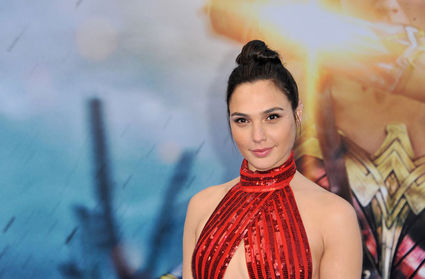 Gal Gadot at the Los Angeles premiere of 'Wonder Woman.'

"Wonder Woman" may be a hit at the box office, grossing $228 million worldwide in its first weekend, but not in much of the Arab world. The reason? It's Israeli star, Gal Gadot.

After being banned in Lebanon, Wonder Womanis now facing bans in Tunisia, Jordan and Algeria.

The Hollywood media site Deadline.com reported Thursday that the movie's scheduled release in Tunisia was suspended because of Gadot's defense of Israel's 2014 incursion into Gaza.

Deadline said the secular Arab nationalist People's Movement party petitioned the Tunisian culture ministry to ban the movie as part of an effort to isolate Israel.  "We must continue the mobilization on this type of affair, as on everything related to normalization with the Zionist entity," the People's Movement said in a statement.

Deadline quoted a spokesman for the ministry who said the cancellation of the screening was "purely administrative," but the movie's Tunisian distributor Lassaad Goubantini said, "It's a decision based on bogus accusations... Today they prevent a film because of an actress, tomorrow they'll invent another excuse. It's an attack on liberties."

Jordan also suspended screening of the movie Wednesday pending a decision by the country's media commission.

"Cinemas that screen the film before the commission approves it will be closed, as this would be considered a violation of the law," Mohammad Quteishat, director of Jordan's Media Commission, told the Petra News Agency.

"Wonder Woman" was also taken off the schedule of a film festival in Algeria, however, festival organizers told AFP that it was pulled because of "administrative issues linked to exhibition rights."  A petition titled, "Non! Pas en Algérie" (No, Not in Algeria), was launched last week, calling for a ban on screening the movie in the country.

Lebanon banned the movie before its premiere, following a decision by the country's Ministry of Economy and Trade, which prohibits all ties with Israel.