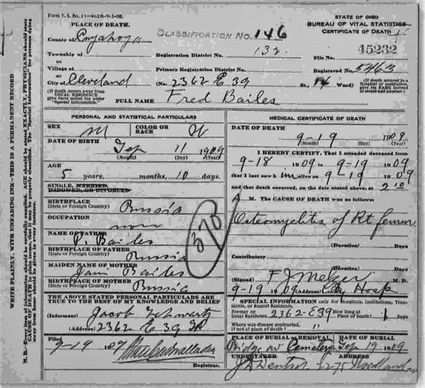 This old picture from the early 1900s was a family enigma for many decades, until the mystery was solved earlier this year. I have stayed in touch throughout the years with cousins who are the son and daughter of Minnie, the girl on the left. My cousins and I knew the picture was of our widowed grandmother, Hinda Schwartzman (with the black bow), along with her widowed daughter, Jennette Bayles (Baylish), and two of Jennette's three daughters-Minnie, left, and Anne, rear. My cousins guessed the young boy and little girl in the picture to be other Schwartzman cousins. It was not known when and where the picture was taken, and why the oldest Bayles daughter, Ida, was not in the picture.

Three years ago a granddaughter of Ida, Cousin Dinny, joined the hunt. Since all four of us now live in Florida, we got together for a family reunion. Dinny was able to provide us with new information, including a photo and an intriguing hint: her bubbe Ida revealed to Dinny many years ago that she (Ida) used to have a brother, but he died! This was shocking information for us-a male heir in the family in that generation was rare. According to the 1910 Cleveland Census, family matriarch Hinda (called Ida in the Census) had given birth to nine children of which only five survived. My father was the second youngest and only boy of the surviving five. The same Census showed Jennette to have had seven births, but only three survived. In that census, only two of those three surviving children-daughters Anne and Minnie-are listed in residence with their mother, grandmother, uncle (my father) and two aunts. Between mother and daughter, a total of eight children had been "lost"!

With leads from Ancestry.com, I found the ship manifest, which showed that Jennette arrived in America in February of 1909 with three children: Anne, Minnie and Froim, age four-boy! Was "Froim" a "typo"? Where is daughter Ida? Comparing the census to the 1909 ship manifest, there is no mention of the child Froim and still no mention of third daughter, Ida.

Another puzzle piece was added when Minnie's daughter found and provided me with this picture postcard of Jennette and her three daughters, Anne, Ida, and Minnie, but no Froim. On the back was their handwritten address with the signature of my father-Jennette's brother.

Following up on a recommendation at one of the Jewish Genealogical Society of Greater Orlando (JGSGO) workshops, I reached out to the Jewish Genealogy Society of Cleveland. In short order, I received the following response: "... regarding the child Froim, who immigrated in early 1909 but was not listed with his mother and siblings in the 1910 census. It seems that he died in Cleveland of osteomyelitis on Sept. 19, 1909. His Ohio death certificate from familysearch.org, under the name Fred Bailes, is attached."

Such tragic news-just past six months from arriving in America, eight days after his fifth birthday, and one day after being admitted to City Hospital, Froim died of osteomyelitis of the right femur, a condition easily treated with antibiotics these days, but for this young child, it was fatal. How tragic for this newly arrived, Yiddish speaking family! A ninth child gone.

Jennette's husband/Froim's father had died back in Bessarabia around 1907. At the hospital, that left Froim's uncle, Jacob Schwartz(man) (my father, then 21), to sign the death certificate on behalf of his bereaved, widowed sister.

My father never ever mentioned this tragedy his family went through. He did, however, name his only son, Frank, after Froim, which we thought was solely after my father's father, Froim Schwartzman. Little Froim's sister, Minnie, also never mentioned having a brother to her two children. Only Froim's sister Ida, who was still back in Bessarabia when Froim died, made the chance mention to her granddaughter, Dinny, of once having a brother. That recollection now enables us to remember this treasured, sweet little boy who never had a chance to realize his potential life in America.

We now know the only extant picture of Froim was taken in America the summer of 1909. As to the little girl in the picture with him, the Cleveland City Directory (accessed through Ancestry.com) shows that a married sister of Jennette lived just two blocks away from her newly arrived mother and three sisters. This blond little girl was no doubt Diane Kolinski, visiting her grandmother, her Aunt Jennette, and three of Jennette's (then) four children.

To complete the puzzle, Cousin Dinny provided us with a very dramatic picture of her Grandmother Ida arriving in America on the ship, the SS Rhein, which sailed from Bremen German in April of 1910. The manifest lists "Chaika Schwartz" as being 14 years old. And, she was travelling alone! Again, we learned from Cousin Dinny that Ida (Chaika in Yiddish) had told her that she was left behind in Bendery, Bessarabia, to take care of Grandmother Bubbe Zipporah-whose daughter, Hinda, and grandchildren had all left for America. It was after Bubbe Zipporah's death that Ida sailed for America, arriving seven months after the death of her little brother. 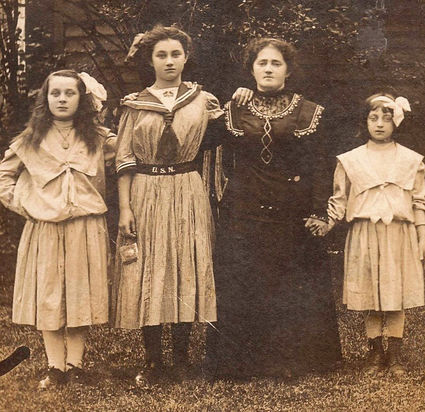 Jennette (third from left) and her three daughters Anne, Ida and Minnie 1910.

I can't imagine the pain my family went through, newly arrived in America, speaking only Yiddish, and soon afterwards this dear little boy came down with a fatal infection in his leg. While it may have helped them carry on with their lives by "forgetting" Froim (or, at least not talking about him), I am glad that we cousins and great nieces can resurrect his memory and memorialize him in our family histories. Putting all these puzzle pieces together was made possible mostly by reaching out to other family members and using the various tools offered by Ancestry.com. Also, we had the help of another local Jewish Genealogical Society (in Cleveland)-where members are always willing to help with "brick walls".

Find Your Ancestors! For the first time, the upcoming 37th IAJGS International Conference on Jewish Genealogy will be held in Orlando: July 23-28 at the Disney Swan Resort. More than 300 lectures and workshops and one-on-one consultations will be available. Ancestry.com, Ancestry DNA, FamilySearch, MyHeritage, JewishGen, and FamilyTreeDNA will be there to help you and answer questions. Henry Louis Gates Jr., host of the PBS hit series, Finding Your Roots, will be a featured speaker. More than 1,000 attendees are expected. The conference is well known for helping thousands of individuals discover their ancestors. For more information visit http://www.iajgs2017.org and "like" us at https://www.facebook.com/IAJGSConference/. Questions? Email info@iajgs2017.org