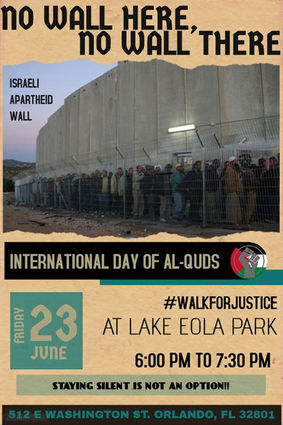 There will be a demonstration for the International Day of al-Quds at Lake Eola Park this evening from 6 p.m.-8 p.m., sponsored by the Muslim Congress (muslimcongress.org).

The flier for the International Day of al-Quds says "Let's stand united with all humans of conscience-be they Jews, Christians, or Muslims-for the sake of haqq (truth) and to show support for the innocent civilian victims of global Zionism, false flag operations, imperialism, occupation, neocolonialism, racism, Islamophobia, white supremicism and oppression."

Al-Quds Day was initiated by the late Iranian leader Ayatollah Ruhollah Khomeini in 1979 following the Islamist seizure of power during the revolution that same year. A recent Anti-Defamation League briefing on the annual event noted that its observation in Iran is "marked by a hateful demonstration of anti-Israel and anti-Semitic sentiment, manifest in government organized rallies and other activities."

How should the Orlando Jewish community respond? "Truth" is being turned inside-out. As Americans, we have the privilege of free speech and the right to demonstrate peacefully and responsibly. However, that does not give us the right to speak untruths, which incite people to anger and violence based on lies.

The truth? There are no victims of global Zionism. Israel is not an imperialistic nor neocolonialistic nation. Israel does not practice racism or oppression. These truths must be shared so that people can make well-informed decisions.

"There may be times when we are powerless to prevent injustice, but there must never be a time when we fail to protest."-Elie Wiesel.

I'd like to thank the Heritage for alerting the Orlando Jewish community about the annual Al-Qods March at Lake Eola. The Mullah's of Iran began The Al-Qods March in 1979 when they took power in 1979 to delegitimize Israel If you believe the State of Israel has the right to exist then you must be equally and passionately opposed to this annual Al-Qods March. Perhaps next year the Orlando supporters of Israel, Imam's, and Rabbis, will stand with Israel and not in the darkness of silence.