Being Jewish kept under wraps 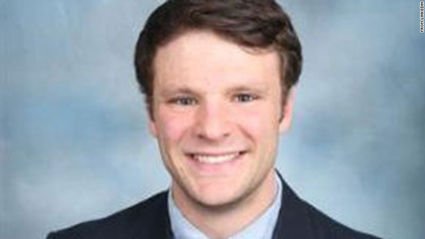 Leaders of the Conference of Presidents of Major American Jewish Organizations, Stephen M. Greenberg, Chairman and Malcolm Hoenlein, Executive Vice Chairman/CEO, wrote to the parents of the late Otto Warmbier, who tragically died shortly after being returned to the U.S following an extended period of incarceration in the notorious North Korean jails.

In their letter to the Warmbiers, the leaders said "We want you know that our thoughts and prayers are with you at this difficult time. The government of North Korea must be held to account. Their record of massive violations of human rights and the notoriously inhumane nature of their prisons underscore the need to hold them to account. We pray that you and your family will be comforted by the mourners of Zion and Jerusalem and know of no further sorrow."

Warmbier, whose mother is Jewish, became active in the Hillel after a Birthright trip to Israel, during which he received a Hebrew name.

Warmbier's family kept his Jewish faith a secret so officials could negotiate his release from North Korea, according to an official who negotiated the student's release.

The official said North Korea justified Warmbier's imprisonment based on the regime's claim that the Friendship United Methodist Church in Wyoming, Ohio, ordered him to steal a propaganda poster, and those working for his release did not want to undermine the claim and hurt negotiations, the Times of Israel reported.

"We didn't want to share it," said Mickey Bergman, who worked on negotiations for Warmbier's release, referring to Warmbier's faith. "The family chose, rightfully so, not to share that information while he was in captivity... because they didn't want to embarrass [North Korea] by explaining that he actually was Jewish" and not affiliated with the Friendship United Methodist Church.

"That's why that part of the story was kept quiet," added Bergman, who is executive director of The Richardson Center-an organization that works to negotiate for people who are held prisoner or hostage by hostile regimes.

Warmbier was remembered by friends and loved ones at a public memorial officiated by his college Hillel rabbi.

Rabbi Jake Rubin, executive director of the Brody Jewish Center at the University of Virginia, called Warmbier "one of the most intellectually curious people I've ever met" during the service held June 22 at Wyoming High School near Cincinnati, The Associated Press reported.

Some 2,000 people attended the public service at the high school and more mourners lined the street. U.S. Sen. Rob Portman, a Republican from the Cincinnati area, told reporters outside that North Korea must be held accountable for Warmbier's detention and death.

"This college kid never should have been detained in the first place," said Portman, who met secretly with North Korean officials in New York last December to press for Warmbier's release. He said North Korea's treatment of Warmbier demonstrated "a basic disregard for human rights, for human dignity."

Warmbier traveled to North Korea for a five-day New Year's tour of the country organized by Young Pioneer Tours. Ten other U.S. citizens were in his tour group. During his stay at the Yanggakdo International Hotel in Pyongyang, Warmbier allegedly tried to steal a propaganda sign from a staff-only floor of the hotel, supposedly as a souvenir.

A video purporting to show the theft was released by state-run Korean Central News Agency on March 18, 2016. In the 18-second low-resolution video, an unrecognizable figure removes the sign from the wall and places it on the floor, leaning it against the wall. This action is shown twice, followed by a higher-resolution picture of the sign on the wall. The face of the person removing the poster is not visible during the video clip.

Two months after his imprisonment, Warmbier suffered severe neurological injury from an unknown cause. North Korean authorities said Warmbier's coma was a result of botulism and a sleeping pill, although U.S. physicians found no evidence of botulism. The United States made diplomatic efforts to seek Warmbier's release, and Warmbier was released in June 2017, after nearly 18 months in captivity. Warmbier arrived in Cincinnati, Ohio, on June 13 and was taken to University of Cincinnati Medical Center for immediate evaluation and treatment.

Warmbier died on June 19, 2017, six days after his return to the United States. Some U.S. officials blamed North Korea for his death.