British Jewry feels left behind amid the election turmoil 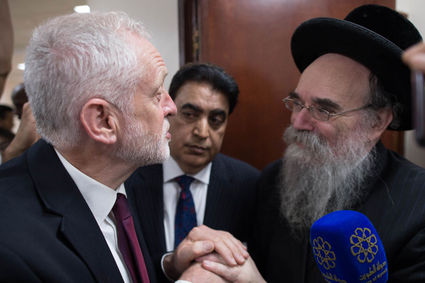 Jeremy Corbyn, left, speaking to faith leaders at the Finsbury Park Mosque on June 19, 2017, after worshippers were struck by a hired van as they were leaving following Ramadan prayers.

(JTA)-Nearly 50 years after she left her native South Africa for Britain to escape apartheid, Sharon Klaff again is finding herself unable to imagine a future for her family in her country and society because of racism.

And this time, the problem is hitting nearer to home, said Klaff, 69, a yoga teacher and Jewish mother of two.

Troubled by the Labour Party's recent electoral successes despite its perceived failure to tackle anti-Semitic vitriol in its ranks, Klaff felt even more  concerned Sunday when London Mayor Sadiq Khan-a Muslim Labour politician who on his first day in office reached out to the city's Jews-allowed hundreds of protesters to march Sunday at an anti-Israel event with flags of the Hezbollah terrorist group.

"There probably isn't a place for me here as a Jew," Klaff, who attended an unauthorized counterprotest against the annual Al-Quds march, told JTA. "And I'm kind of wondering where's the place of anyone who belongs to Western, democratic civilization."

In the Jewish media, few spoke out quite as pessimistically as Klaff about the march or Labour's performance in the June 8 general elections, when the party gained 29 seats rather than suffer the collapse anticipated by critics of Labour leader Jeremy Corbyn.

But amid record levels of anti-Semitic hate crimes, these events nonetheless compounded for many British Jews a growing sense of isolation and the polarizing effects of terrorism on a society that already was struggling with its impending divorce from the European Union.

Corbyn, a far-left politician, ascended to leadership of Labour in 2015. Last year a parliamentary committee of inquiry determined he was not doing enough to curb the growing prevalence of anti-Semitic hate speech in his party.

The previous year, Corbyn attended a memorial ceremony for Palestinian terrorists who were killed by Israel before the initiation of peace talks. And in 2009, Corbyn described during a speech in parliament both Hamas and Hezbollah as organizations "dedicated towards the good of the Palestinian people and bringing about peace and social justice and political justice." Corbyn last year said he regretted calling the militants his "friends" in the same speech.

The British media gave unprecedented coverage to Labour's anti-Semitism problem under Corbyn. Critics say he has failed not only to prevent hate speech against Jews and Israel in his party's ranks, but also to punish anyone responsible for it.

Subsequently, the president of the Board of Deputies of British Jews, Jonathan Arkush, in an unusual statement for his nonpartisan group said last year, "Frankly, most people in the Jewish community can't trust Labour."

The rare rebuke was cited frequently by pundits who said Corbyn's Labour was unlikely to threaten the ruling Conservative Party headed by Theresa May, who called an early election. May was seeking a public reaffirmation of her leadership after replacing David Cameron as prime minister; he resigned after a majority of voters supported leaving the European Union.

Her gambit backfired spectacularly. May lost her party's absolute majority in parliament, forcing it to form a coalition with a smaller party from Northern Ireland and handing Corbyn an important success that shocked British Jews.

Prior to the election, 77 percent of Jewish voters said they supported May's Conservatives and only 13 percent backed Labour.

"We were unable to stop anti-Semitic politics being normalized on the left and we were unable to stop it from moving into the mainstream," David Hirsh, a British Jewish columnist and prominent sociologist at the University of London, wrote in a column in The Jewish Chronicle titled "Antisemitic Politics is the New Normal."

To Klaff, "Corbyn's success, the acceptance of Hezbollah flags on the streets of London, it's the culmination of something that I first started noticing about seven years ago, I guess, that is making me feel increasingly uncomfortable in the United Kingdom."

She cited a conversation that she had recently with a yoga student of hers, a housing union activist in his 20s who supported Corbyn.

"I told him that Corbyn is responsible for anti-Semitism. He wasn't interested," Klaff recalled.

Corbyn did not participate in the Al-Quds march over the weekend. But he had attended several previous events, including in 2012 when he was photographed smiling in front of a Hezbollah flag held by an Al-Quds marcher. The photographer who took the picture said Corbyn may have not been aware of the flag in the background.

At Sunday's event, organizers instructed participants to say they support Hezbollah's political wing but not its military one. The distinction is rejected by Hezbollah itself, although the European Union in 2013 classified only the armed wing as a terrorist group.

In 2002, Hezbollah's leader, Hassan Nasrallah, said Israel's creation was the expression of Allah's will to "gather the Jews in one place" for "the final and decisive battle."

The United States, Israel, Australia, New Zealand, the Netherlands and several other countries regard all of Hezbollah's organs as belonging to the same terrorist entity.

The refusal by police and the City of London to ban the march, and their action against counterprotesters, drew harsh condemnations by critics from the Jewish community in an apparent reflection of growing exasperation.

Hezbollah "seeks the genocide of Jews worldwide," Gideon Falter, chairman of the Campaign Against Antisemitism watchdog, wrote in a scathing statement. "As Britain mourns those we have so recently lost to Islamist terrorism," he added, police "permitted Hezbollah supporters to mount a show of force through the heart of London. This is the reality of the supposed crackdown on extremism and terrorism."

Jack Mendel, a journalist who covered the march for the Jewish News of London, made light of the situation on Twitter, where he wrote about a photo he took of three marchers draped in Hezbollah's flag.

Mendel also noted in a column published Monday that whereas police ignored the flags, one officer advised him to be careful not to hurt his toes after noticing Mendel was wearing flip-flops.

"There's a certain sense of helplessness when Hezbollah's terror flags fly in my city, and police are more concerned with my well-being," Mendel wrote.