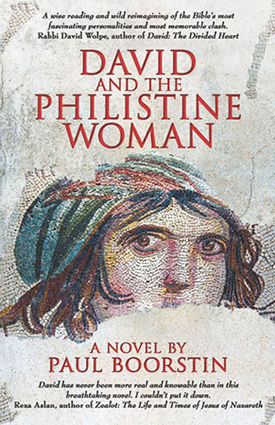 The clash of David and Goliath may well be the world's ultimate narrative of good triumphing over evil. Thanks to award-winning documentary filmmaker Paul Boorstin's inspired reimagining in "David and the Philistine Woman," this story acquires the dramatic intensity of a thriller, with unexpected twists and unforgettable heroes. One of the biggest surprises is Nara, the "Philistine woman" of the title. A blacksmith's daughter, because of her remarkable height and strength she is betrothed to Goliath, the most fearsome warrior of her people. What happens when Nara's fate collides with David's destiny will forever transform how you experience this climactic turning point in the Bible and illuminate its timeless significance.

In the tradition of "The Red Tent," Boorstin movingly depicts additional powerful female characters, including King Saul's daughter Michal, the young woman who will become David's wife and risk everything to save him, and Nitzevet, David's visionary mother. Boorstin also explores the dangerous rivalry between David and Jonathan, King Saul's son and heir to his throne, masterfully imagining how through the harrowing ordeal they experience together, Jonathan's deep suspicion for David is transformed into one of the most profound friendships in the Bible.

Like a filmmaker using a wide-angle lens, Boorstin captures the epic panorama of a struggle that changed history. At the same time, as if with a close-up lens, he zooms in between the lines of the Bible to discover the mysteries and revelations he sees hidden in the hearts of the characters. Always startling and unexpected, yet true to the spirit of the original, "David and the Philistine Woman" offers a story of intrigue, passion and faith that has inspired leading Biblical commentators including Rabbi David Wolpe, named "the most influential rabbi in America" by Newsweek and author of "David: The Divided Heart," and Reza Aslan, producer/host of the CNN series "Believer with Reza Aslan" and author of the No, 1 NY Times best-seller "Zealot, the Life and Times of Jesus of Nazareth," to sing its praises.

"David and the Philistine Woman" delivers an inspiring contemporary message: That without hearing a divine voice to direct our actions, we must all strive to do the right thing-that what links people of goodwill is not so much the god they worship, as it is their bond of common humanity and shared compassion.