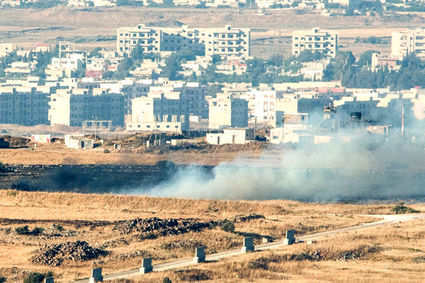 Smoke rises in Syria near the Israeli-Syrian border June 24, 2017.

Mortar shells fired from Syria into the Israeli Golan Heights Saturday prompted the IDF to respond with a retaliatory strike in Syria, purportedly killing Syrian soldiers.

Despite the incidents, a military escalation between Israel and Syria is unlikely and is in neither side's interest, said Prof. Efraim Inbar, former director of the Begin-Sadat Center for Strategic Studies at Israel's Bar-Ilan University.

"This is nothing new for the IDF to retaliate to spillover from Syria," Inbar told JNS.org. "This is an implementation of old policy."

Yet in a December 2016 interview with the Syrian daily newspaper Al-Watan, Assad maintained that despite his nation's years-long civil war, "Israel alone remains our enemy country."

Regarding the incident that prompted Israel's weekend strike in Syria, the IDF said mortars fired into the Jewish state appeared to be errant fire originating from clashes between warring factions near the Israel-Syria border. Around 10 mortar rounds were confirmed to have landed in Israeli territory near Syria's Quneitra area. No injuries or damage were reported.

Reflecting its policy for all fire landing in Israeli territory from Syria, the IDF held the Syrian regime responsible, saying it would "not tolerate any attempt to harm Israeli sovereignty and the security of its citizens."

Echoing the IDF's statement, Israeli Defense Minister Avigdor Lieberman warned Saturday, "The Assad regime is responsible for what occurs in its territory and will continue to suffer the consequences if such events recur."

IDF spokesman Avichay Adraee confirmed, via his Arabic-language Facebook page, that the Israeli Air Force struck Syrian army targets in response to the mortars landing in Israel's territory from Syria.

"Our policy is clear: We will not tolerate any spillover or trickle whatsoever-neither mortars nor rockets, from any front. We will respond strongly to any attack on our territory or our citizens," Prime Minister Benjamin Netanyahu said Sunday at Israel's weekly cabinet meeting.

Elaborating on Israel's concerns in the region, Netanyahu noted "Iran's attempts to establish itself militarily in Syria as well as its attempts to arm Hezbollah-via Syria and Lebanon-with advanced weaponry."

The Begin-Sadat Center's Inbar explained that Israel "is an actor with a very low profile in Syria." The Jewish state, he said, is "interested in preventing weapon deliveries to Hezbollah and we want to prevent an Iranian front in the Golan Heights. We basically have defensive aims."

During a meeting with Russian President Vladimir Putin in March, Netanyahu expressed his strong opposition to Iranian forces and terror proxies-many equipped with Russian-made heavy artillery-operating in Syria, close to Israel's northern border.

"Israel does not want a Shi'ite corridor," Inbar said. "Assad is an ally of Iran, so to some extent we would like the forces against Assad to keep the Iranians away, but the future of Syria is not in Israel's hands. We are a small state, and our ability to influence events there is limited-very limited."

In line with reports that Netanyahu has lobbied for a security zone along the Israel-Syria border as part of any future negotiated resolution to end the six-year-long Syrian Civil War, Inbar said Jordan and Israel are cooperating on an effort to establish such a buffer zone between Israel, Jordan and Syria.

Saturday night's events followed the IDF's confirmation that it downed a Syrian drone violating Israeli airspace over the Golan Heights in April, and Syrian state media reports that Israel launched an airstrike during the same month near Damascus International Airport on an Iranian weapons cache that was destined for Hezbollah.