Rescue at Entebbe: An anniversary of freedom 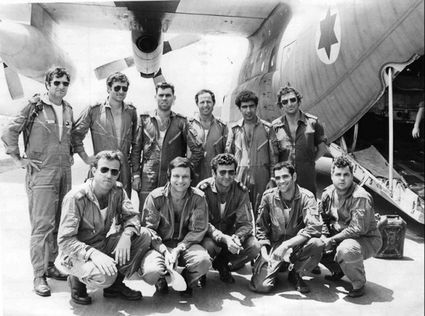 The crew of the C-130 Hercules cargo plane and (then) Lt. Col. Joshua Shani (in the center of the group).

On America's Independence Day, let's not forget another important anniversary-On July 4th, 1976, Operation Entebbe, a hostage-rescue mission, was carried out by commandos of the Israel Defense Forces (IDF) at Entebbe Airport in Uganda. This is a different story of independence and freedom for Jews and Israelis throughout the world.

Operation Entebbe a hostage-rescue mission, was carried out by commandos of the Israel Defense Forces (IDF) at Entebbe Airport in Uganda. The operation, which took a week of planning, lasted 90 minutes. One hundred and two Israeli and Jewish hostages were rescued.

Brig. Gen. (res.) Joshua Shani was the lead pilot in Operation Entebbe, flying the first C-130 Hercules cargo plane with the entire rescue force on board. He agreed to answer a few questions.

How did the crisis at Entebbe begin?

On June 27, 1976, a Paris-bound Air France flight from Tel Aviv, via Athens, was hijacked and diverted to Entebbe, Uganda. Two of the hijackers were members of the German Baader-Meinhof Gang, and two were from the Popular Front for the Liberation of Palestine. They demanded the release of 53 jailed terrorists in Israel.

On the third day of the crisis, the terrorists separated Israeli and Jewish passengers from the others. The captors freed the non-Jews and sent them to France the next day.

Quietly, while the rest of the world talked but did nothing, the Israel Defense Forces planned a rescue mission.

How did you first find out that you would be asked to help rescue the hostages?

But the C-130 was a new plane, and the IAF top brass were always focused on fighter jets, not transport planes. Peled asked me if it was possible to fly to Entebbe, how long it would take and what it could carry.

I left him with the impression that a rescue would be possible.

How did the operation begin?

We began our journey from Sharm el-Sheikh, Egypt, which at the time was under Israeli control. The takeoff from Sharm was one of the heaviest ever in the history of this airplane. I didn't have a clue what would happen. The aircraft was crowded. I was carrying the Sayeret Matkal assault team, led by Yonatan Netanyahu.

I was also carrying a Mercedes, which was supposed to confuse Ugandan soldiers at the airport, because Idi Amin, the country's dictator, had the same car. And I also found room to pack Land Rovers and a paratrooper force.

I gave the plane maximum power, and it was just taxiing, not accelerating. At the very end of the runway, I was probably two knots over the stall speed, and I had to lift off. I took off to the north, but had to turn south where our destination was. I couldn't make the turn until I gained more speed. Just making that turn, I was struggling to keep control, but you know, airplanes have feelings, and all turned out well.

What was going through your head as you approached the runway in Uganda?

My biggest fear was not being shot at from the ground, but making a mistake as a pilot. All I could think the entire time was "Don't screw this up!" True, the risks to my life were real, but I was more worried about botching the landing and endangering the success of the entire operation. Think about it-how many people would have died at Entebbe if I had made a mistake?

In case something did go wrong, though, I was prepared for the worst. I was wearing a helmet, a bullet-proof vest, and I had an Uzi. I was also given a thick wad of cash in case I needed to use it to escape Uganda. Luckily, I never had to use it. I returned the cash after returning to Israel.

What happened after you landed?

I stopped in the middle of the runway, and a group of paratroopers jumped out from the side doors and marked the runway with electric lights, so that the other planes behind me could have an easier time landing. The paratroopers went on to take the control tower.

The Mercedes and Land Rovers drove out from the back cargo door of my airplane, and the commandos stormed the old terminal building where the hostages were.

While coordinating the assault, Yonatan Netanyahu, Sayeret Matkal's commander, was fatally shot by a Ugandan soldier.

When the hostages were freed, what was your next move?

We had a little problem: We needed fuel to fly back home. We came on a one-way ticket! We had planned for a number of options for refueling, and I learned from the command-and-control aircraft flying above us that the option to refuel in Nairobi, Kenya, was open.

After about 50 minutes on the ground in Entebbe, I gave the order: "Whoever is ready, take off." I remember the satisfaction of seeing plane number 4, with the hostages on board, taking off from Entebbe-the sight of its silhouette in the night.

It was then that I knew. That's it. We did it. The mission succeeded.

How were you greeted in Israel?

The plane with the hostages landed at Ben-Gurion Airport, where they were reunited with their families. The other three planes remained for a debrief. Here comes Yitzhak Rabin, prime minister of Israel, walking up to me.

I had been in my flight suit for 24 hours straight, in temperatures over 100 degrees in the airplane, sweating and smelly, and here walks the prime minister with big open arms. I'm thinking, please don't hug me, he may die from this!

He hugged me for what felt like a full minute, and said only "Thanks."

What was it like returning to Israel as a hero? 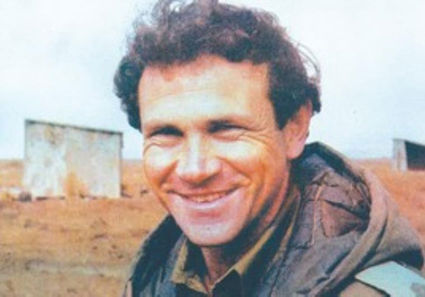 After my father's death, I found his letters from Bergen-Belsen that he sent to Kibbutz Mishmar Haemek. The letters describe his experiences during the Holocaust, what happened to his family, etc.

One of his letters said, "My only comfort is Joshua. He gives me reason to continue."

The reason I mention this letter is because, 30 years later, when I returned from Entebbe, my father hosted a party for me. Family and friends were all there to celebrate the success of my mission. My father was in a great mood.

I know what he was thinking, a Holocaust survivor. His son at the time was a lieutenant colonel in the Israel Air Force and had just flown thousands of miles in order to save Jews. It probably added 10 years to his life.