Go Ory and Zev-members of Team USA water polo at the Maccabi Games! 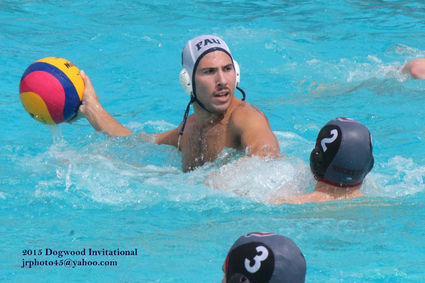 Team USA is among seven nations competing in men's water polo action at the Maccabiah Games as Canada, Germany, Hungary, Mexico, Brazil and host Israel will all battle for international bragging rights. The United States will bring in excess of 1,100 athletes to Israel to be part of an event in which 10,000 Jewish athletes from 80 countries participate in 43 different sports.

The Maccabiah Games is the world's largest Jewish athletic competition in the tradition of the Maccabees-emphasizing the centrality of the State of Israel in the life of the Jewish people.

The Maccabees were the leaders of a Jewish rebel army that took control of Judea between 164 BCE and 63 BCE and reasserted the Jewish religion in the area.

The Maccabiah Games take place every four years in Israel. They are the Maccabi World Union's largest and most famous enterprise.

The principal mission of the Maccabiah Games is to facilitate a worldwide gathering of young Jewish athletes in Israel-staging the highest possible levels of sports competitions and strengthening their connection to Israel and the Jewish people.

Within the Maccabiah Games, there are four separate competitions that take place: Open, Juniors, Masters and Paralympics.

Juniors games are open to any qualifying athlete ages 15-18. Masters are divided into a number of different age categories mostly to accommodate older competitors. The Open Division is generally unlimited in age-subject to the governing international rules in each sport-and is intended for the best athletes from each delegation.

Maccabiah Games officials offer the athletes opportunities to tour the land of Israel and integrate all Maccabiah participants with the Israeli society and localities in the country; initiating and creating an unforgettable experience comprised of competitive sports, cultural events and lifetime memorable experiences.

In addition to being competitive, the sports competitions are also dedicated to the values of fair play, mutual respect, victory of body, intellect, and the pursuit of excellence.

The 20th Maccabiah Games is going to be the biggest since the Games started in 1932-including about 10,000 athletes and 22,000 fans from more than 80 countries.

Besides meeting each other in competitive matches in the most qualified stadiums, Israelis and Jews from every corner of the world will join in countless programs designed to build strong relationships and significant shared experiences.

Maccabiah 2017 will celebrate the 50 years of Jerusalem since its reunification in 1967 at the Opening Ceremonies of the Games and many other events.

Located in Philadelphia, Maccabi USA is a nonprofit organization which serves as the official sponsor of the United States Team to the World Maccabiah Games in Israel and other Maccabi competitions around the world.