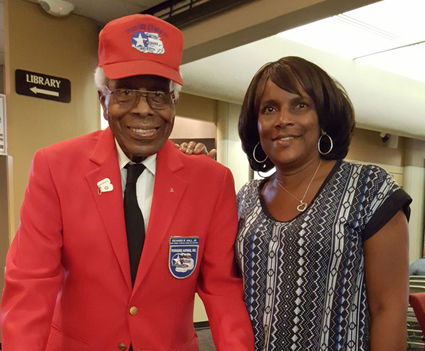 Sgt. Richard R. Hall at the Holocaust Center, pictured here with his caregiver.

The Holocaust Memorial Resource & Education Center of Florida is thrilled to welcome Winter Park native and Tuskegee airman, Chief Master Sergeant Richard R. Hall, Jr., to the Center on Sunday, July 23, at 2 p.m. for a screening of the film "Red Tails." The program will also include a post-film talkback with Sgt. Hall. This is part of the Holocaust Center's summer series, which encourages visitors to engage in conversations about the history and future of the Civil Rights Movement in the United States.

Hall grew up in Winter Park. He left Central Florida to attend Xavier University of Louisiana in New Orleans, but was called to active duty in 1942. It was then that he became a member of the Tuskegee Airmen, the first African-American division to fly in World War II. After the war, the Tuskegee Airmen were disbanded and the Air Force became the first integrated branch of the U.S. military. Hall joined the Air Force, and went on to serve in the Korean War. He spent the rest of his military career teaching aircraft maintenance in Ohio and South America before retiring in his hometown of Winter Park.

Hall remains an active member of his community. In 2007, the Airmen collectively were awarded the Congressional Gold Medal of which he received a CGM Certificate and was recently honored during Sanford's Memorial Day Parade. Additionally, a statue of him sits outside the Hannibal Square Heritage Center in Winter Park, where his story is preserved for future generations.

Richard Hall's history is part of a larger narrative about civil rights, equality, and overcoming prejudice and injustice-issues that are central to the Holocaust Center's mission to create a caring and inclusive community. Hall's story will be told against the backdrop of A Place for All People, a poster exhibition that celebrates the opening of the National Museum of African-American History and Culture. The exhibit highlights the "Double-V Campaign," which rallied for victory at abroad and at home, alongside other major individuals who, through their contributions and accomplishments in politics, art, music, photography and beyond, advanced the Civil Rights Movement. This talkback with Hall is a chance to engage not just with the information presented in the exhibit, but with a living witness and participant in this history.

The Holocaust Center hopes that visitors will embrace this remarkable opportunity to hear from one of the few remaining Tuskegee Airmen. The film screening and talkback will take place on Sunday, July 23 at 2 p.m. The Holocaust Center is located at 851 N. Maitland Ave, Maitland, FL, 32751.