Holocaust education through a civics lens 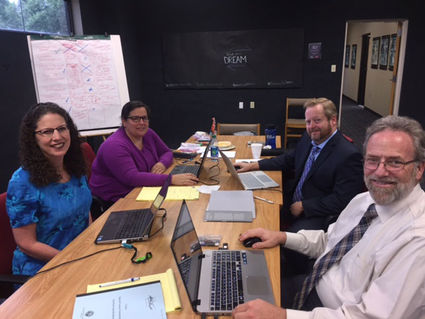 On Monday morning, June 12, I entered the Holocaust Memorial Resource and Education Center of Florida in Maitland looking forward to spending five busy days writing middle school civics lessons focusing on the Holocaust with Mitchell Bloomer, the Holocaust Center's resource teacher; Jennifer Adkison, a high school U.S. government and economics teacher at East River High School; and Stephen Poynor, a high school Holocaust Studies and sociology teacher at West Orange High School. My work as professor of political science at the University of Central Florida is complemented by my service as content specialist for the Florida Joint Center for Citizenship. In all ways I had joined the "dream team," working with professionals bringing their disparate talents and experiences together to develop middle school civics lessons focusing on the Holocaust. It was an honor to work with them. I learned so much.

The Task Force's decision to form a curriculum-writing group to develop civics lessons made good sense. The lessons would reflect both tested civics content and required Holocaust content. In 1994, Florida Statute 1003.42(f) was enacted requiring teaching the "history of the Holocaust (1933-1945), the systematic planned annihilation of European Jews and other groups by Nazi Germany, a watershed event in the history of humanity, to be taught in a manner that leads to an investigation of human behavior, an understanding of the ramifications of prejudice, racism, and stereotyping, and an examination of what it means to be a responsible and respectful person, for the purposes of encouraging tolerance of diversity in a pluralistic society and for nurturing and protecting democratic values and institutions." Florida is not unique in requiring Holocaust education as 12 other states mandate Holocaust education while seven states have written into their statutes or educational mandates that Holocaust education is voluntary. Other states, such as Oregon, are currently pursuing Holocaust education requirements. Florida is unique in mandating a statewide middle school civics test. Learning about the Holocaust as part of the required civics course that includes a statewide exam further elevates and broadens Holocaust education.

The results of our work will be class-tested next year and be posted on the Holocaust Task Force website (http://www.flholocausteducationtaskforce.org/).

Modern approaches to Holocaust education are often understood as part of the Jewish notion of "zachor" or "remember," which is both an injunction and a responsibility. It means that the Holocaust must be taught to others as a key element of remembering it. Persons advocating Holocaust education suggest that remembrance of the past must be connected to the present. Taking the command element of "zachor," the directive to remember, together with the responsibility to teach the lessons of the Holocaust in the present tense, supports preventing atrocities like the Holocaust in the future through a focus on citizenship and civic education, and a focus on tolerance and diversity of peoples and points of view. Civics is a natural fit for remembering the Holocaust as both an injunction and a responsibility.