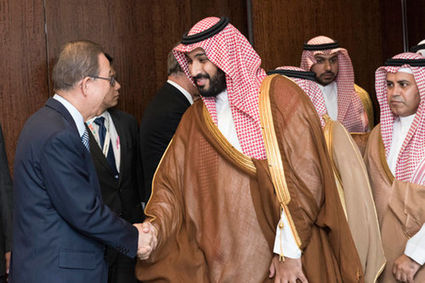 Saudi Defense Minister Mohammed bin Salman (center) shakes hands with Ban Ki-moon, then secretary-general of the United Nations, in June 2016. Bin Salman was recently appointed as Saudi Arabia's crown prince, making him next in line to be king. His rise may have implications for Israeli-Saudi ties.

Building off the last few years of rumors and reports regarding clandestine relations between Israel and Saudi Arabia, mainly motivated by their shared concerns over Iran's nuclear program and destabilizing regional activities, two recent developments highlight a potential route for Israel to firm up support within the Arab world.

The deal to hand over the islands of Tiran and Sanafir was reached in 2016 after a visit to Egypt by King Salman. The uninhabited islands that sit on the southern entry to the Gulf of Aqaba were originally given to Egypt in 1950 by Saudi Arabia, in order to protect them from Israel. Later, the islands played an important role in setting off the 1967 Six-Day War when Egypt closed the Straits of Tiran to Israeli ships, preventing Israeli access to the Red Sea and Indian Ocean.

United Nations peacekeepers maintain a presence on Tiran Island as part of the 1979 Israel-Egypt peace treaty. Under the treaty's terms, Israel gave its approval for the Egyptian-Saudi agreement as long as the Saudis maintained the treaty's clauses pertaining to Israeli shipping through the Straits of Tiran.

According to Joshua Teitelbaum, a senior research associate at the Begin-Sadat Center for Strategic Studies and a professor of Middle Eastern Studies at Israel's Bar-Ilan University, it is not of utmost importance to Israel who controls the Tiran and Sanafir islands as long as the Jewish state has unimpeded shipping access.

Instead, Teitelbaum argued, the constructive cooperation between Egypt and Saudi Arabia is more crucial for Israel as it relates to the Arab alliance to counter radical Islam and the Iranian threat.

"Israel wishes to keep that camp strong," Teitelbaum told JNS.org. "If Egypt and Saudi Arabia can get together, whether on confronting Iran or Qatar, or even the exchanges of these two islands, then that is beneficial for Israel. This firms up the Saudi-Egyptian relationship."

Mohammed bin Salman's rise to crown prince signals a new direction in Saudi Arabia, and may have implications for Israeli-Saudi ties and the Israeli-Palestinian peace process.

Saudi Arabia is dealing with low oil prices, its rivalry with Iran, a dispute with Qatar, and civil wars in Yemen and Syria. In his former role as defense minister, Prince Salman sought to boost ties with the U.S. as well as to overhaul and diversify the Saudi economy, which is heavily dependent on oil.

In a rare public comment on Saudi Arabia by an Israeli official, Communications Minister Ayoub Kara said the appointment of the new crown prince "means more economic cooperation in the Middle East, and not just regarding oil."

"The strengthening of relations with the Trump administration is the beginning of a new and optimistic time between Saudi Arabia and regional states, including Israel and the Jewish people," Kara said, adding, "This crown prince is really one of the architects of this post-Arab Spring Saudi policy that has pushed for...an anti-Iran and anti-radical Islam policy, which includes targeting Hamas....Israel will be pleased to cooperate with the new crown prince."

Prince Salman has already been tied to rumors that he has met with Israeli officials as part of efforts to establish closer economic and security relations.

"In terms of the general trend of things, the Saudi prince is the guy who has been running Saudi foreign policy for the past two years," Teitelbaum said. "During that period, there's been an increasingly closer relation between Israel and Saudi Arabia. That's going to likely continue."

Israel and Saudi Arabia are discussing allowing Israeli businesses to operate in the Arab Gulf as well as letting Israel's El Al airline to fly over Saudi airspace, the London Times recently reported, citing Arab and American sources. Prince Salman has been in talks with Jared Kushner, President Donald Trump's son-in-law and senior adviser, about improving Saudi ties with Israel as a step towards Israeli-Palestinian peace, the report added.

'A limit on the relationship'

Despite the Saudi-Egyptian cooperation and reports of Prince Salman's interest in ties with Israel, Teitelbaum cautioned against expectations for official diplomatic ties between Israel and Saudi Arabia.

"There is a limit on the relationship, with most of the relations being clandestine," he said. "The Saudis don't really have a motivation to make these relations overt because they get what they need from Israel-intelligence, security, technology-without open diplomatic relations."

In May, The Wall Street Journal reported that Gulf states such as Saudi Arabia would take steps to normalize relations with Israel if Prime Minister Benjamin Netanyahu makes gestures for the Palestinians, such as freezing settlement construction or easing trade restrictions in Gaza.

"In order to bring Israeli-Saudi relations out into the open, the Saudis would really need to see major progress on the Israeli-Palestinian track. And that is really tough," Teitelbaum said, adding that "we are a long way from full diplomatic relations."