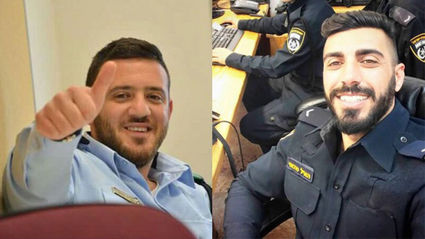 Master Sgt. Kamil Shnaan (l) and Master Sgt. Haiel Sitawe, the police officers killed in the terror attack next to the Temple Mount complex in Jerusalem on July 14, 2017.

Two Israeli policemen in their 20s were critically wounded in the Old City of Jerusalem Friday morning when three Palestinian terrorists opened fire near the entrance to the Temple Mount. Two other victims were lightly injured.

Nidal Seder, a United Hatzalah volunteer who lives in the Old City, was the first to arrive at the scene, according to the emergency medical services organization.

"I began performing CPR on one of the victims near the [Al Aqsa] Mosque," Seder said. "I was joined by members of the Red Crescent, police officers and other EMS volunteers who rushed to the site. We were told that other volunteers had begun CPR on a second victim and that there were two other people that sustained light injuries."

Yechiel Stern, another volunteer, was a minute away from the Lion's Gate entrance to the Old City when he heard the gunshots.

"I arrived at the entrance together with a volunteer doctor from United Hatzalah and we began performing CPR on a critically wounded person," he explained. "After we finished, police officers directed us to another area of the incident which was inside the Temple Mount complex itself. There we provided first aid treatment to an additional critically injured person who was evacuated to the hospital while undergoing CPR. We also provided first aid treatment to an additional two people who had sustained shrapnel wounds and were suffering from shock."

"For us the Temple Mount is a house of prayer for all peoples. For them, it is a base for terror and hatred... The Temple Mount is in our hands should not be just a slogan, it should be the reality on the ground," Member of Knesset Moti Yegev told TPS news agency.

Knesset Member Yehuda Glick said, "We need to take a Zionist response, including construction throughout Jerusalem and opening the Temple Mount to Jews for additional hours in the day. We must not give terrorism even the slightest achievement," TPS reported.

Prime Minister Benjamin Netanyahu, in a statement Friday morning, insisted that "the status quo will be protected," according to Times of Israel.

Erdan called the attack "an extremely serious event which crossed all red lines. The investigation is ongoing. We will need to reevaluate all of the security arrangements on the Temple Mount and its environs. I call on all public leaders to act to calm the situation and ensure quiet in Jerusalem," the Times said. 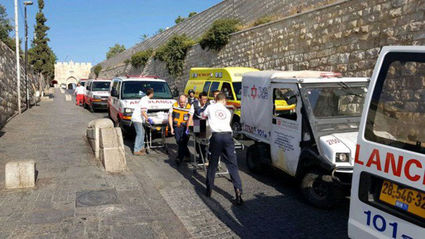 Magen David Adom medics arrive at the scene of the attack on the Temple Mount.

Police are investigating the situation, questioning how the terrorists managed to bring the weapons past security and into the Temple Mount complex.