The Forward sees threat from 'censors,' but other Jewish editors and groups differ 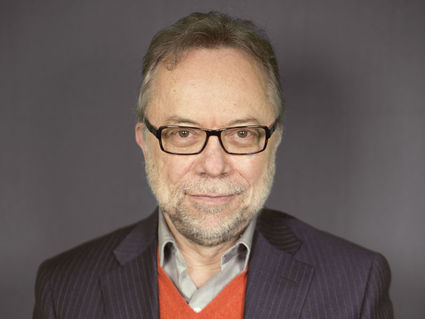 Is a "mobilized faction" in the American Jewish community attempting to "censor" dovish views? The president of The Forward newspaper thinks so, but other editors and leaders of some left-of-center Jewish organizations see things differently.

The dispute arises from the July 12 episode of the Jewish Broadcasting Service (JBS) television series "L'Chayim," which featured a panel discussion on freedom of speech in the Jewish community.

At the center of the discussion was The Forward's decision to publish a full-page ad in its June 2 edition from Jewish Voice for Peace (JVP), supporting imprisoned Palestinian terrorist Marwan Barghouti.

At the time, The Forward's publisher, Rachel Fishman Feddersen, said she decided to run the ad because "mass media itself is on the firing line, and freedom of expression is under pressure from our own government." In the July 12 television segment, however, The Forward's president, Samuel Norich, offered a different explanation. He said freedom of speech is "endangered" because "there is a mobilized faction in the Jewish community that is seeking to censor."

Asked by JNS.org to identify the individuals or organizations to whom he was referring, Norich responded, "I have no further comment."

"I don't feel pressured or censored," Rob Golub, editor of the Wisconsin Jewish Chronicle, told JNS.org. "I don't think any alleged restriction of points of view can even be much of a meaningful problem in the media today. There's all the opinion you could ever want on Twitter. Nobody is sitting around thinking to themselves, 'Darn, I only wish in 2017 I could get access to more opinions.'"

"Is [Norich] suggesting there is a group who have formally joined forces to silence the Jewish press?" asked Judie Jacobson, editor-in-chief of the Connecticut Jewish Ledger. "If so, he needs to 'out' that group. Name them. Shame them... It is incumbent upon him to be more specific."

Hillel Goldberg, executive editor of Colorado's Intermountain Jewish News; Mordecai Specktor, publisher and editor of Minnesota's American Jewish World; and David Ben-Hooren, publisher of New York's The Jewish Voice, all likewise told JNS.org that no factions in the Jewish community have attempted to censor their newspapers.

"This idea that there is some force trying to censor the Jewish media or community is all in the minds of The Forward's editors," Ben-Hooren said. "It's not reality."

Some left-of-center Jewish organizations likewise report no efforts to silence them. Ori Nir, a spokesman for Americans for Peace Now, said there have been no attempts to prevent officials of his organization from publishing articles or speaking in public forums, nor any pressure on newspapers to reject the group's advertisements. He said there have been instances in which editors turned down APN's op-eds because they were deemed "too sensitive" or "too controversial," although many other newspapers have published them.

Partners for Progressive Israel, the U.S. affiliate of Israel's left-wing Meretz political party, has encountered some "attempts to silence us," according to Dr. Maya Haber, PPI's director of programming and strategy. She cited the fact that PPI's Detroit chapter has not been allowed to participate in that community's Walk for Israel for the past several years. Organizers of the event said PPI was excluded because it promotes the boycott of Israelis who reside beyond the pre-1967 lines.

Haber also said, "Our views are seldom taken into account even by organizations in which we are represented." But Haber, like The Forward's Norich, declined requests from JNS.org to name the organizations she is accusing.

Granate Sosnoff, communications strategist for JVP, the group at the center of the original controversy over The Forward, told JNS.org there have been no attempts to interfere with her group's activities or publications.

"This does not mean that ongoing attempts to silence us by intimidation and other means do not occur," she said, pointing to anonymous posters that recently appeared in the neighborhood where JVP Executive Director Rebecca Vilkomerson resides. The unsigned posters criticized JVP for working with American Muslims for Palestine, a group the Anti-Defamation League says "has at times provided a platform for anti-Semitism."

Former Union of Reform Judaism President Rabbi Eric Yoffie, who was part of the July 12 JBS panel, said he has received harassing emails in response to some of his articles, but "they come from individuals, not organizations, and they don't bother me."

"Generally speaking, I believe that we are blessed with a lively and open discussion in the American Jewish community, and I don't see much evidence that freedom of speech is endangered in any way," Yoffie said. 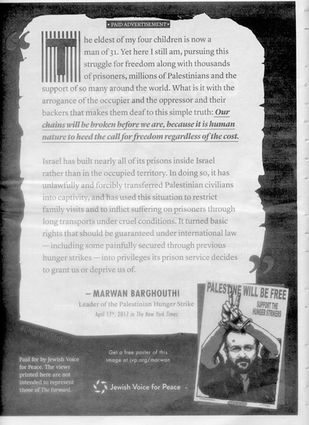 The paid advertisement supporting Palestinian terrorist Marwan Barghouti that was published last month in The Forward.

Another participant in the JBS television discussion, Amanda Berman, director of legal affairs at The Lawfare Project, told JNS.org there is "a censorship problem related to Jewish and pro-Israel advocacy, but Sam Norich's position on that problem is entirely inverted." She pointed to recent instances in which pro-Israel speakers and events on college campuses have been disrupted or shut down "by raging mobs chanting genocidal slogans and expletives." Instead of focusing on such activities, The Forward "has now set a precedent [by publishing the Barghouti advertisement] that its pages are a welcome place for terrorists aiming to perpetuate genocidal viewpoints and outright lies," Berman said.

"No one silenced The Forward," said New York University legal scholar Thane Rosenbaum, who also took part in the July 12 JBS panel discussion. "They made this decision without anyone's help. If they were a true Jewish news source, they would have practiced self-censorship, and not given voice and moral support to a killer of Jews."