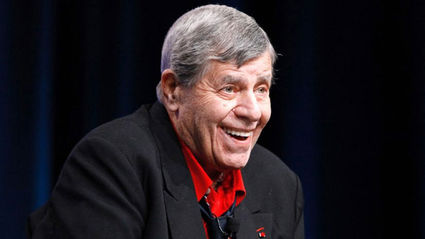 My favorite comedian of all, maybe the funniest comic of all time, has passed on. I'm talking about Jerry Lewis.

Jerry Lewis was an American actor, comedian, singer, film producer, film director, screenwriter, and humanitarian. He was known for his slapstick humor in film, television, stage and radio. He died at the age of 91 on Aug. 20th. He will be remembered for all of his movies, his years as half of the team of Martin and Lewis (with Dean Martin) and mostly, for the joy he brought to millions.

Lewis served as national chairman of the Muscular Dystrophy Association and hosted the live Labor Day weekend broadcast of the Jerry Lewis MDA Telethon for 44 years. He received several awards for lifetime achievement from the American Comedy Awards, Los Angeles Film Critics Association, Venice Film Festival and Academy of Motion Picture Arts and Sciences, and was honored with two stars on the Hollywood Walk of Fame.

Jerry's real name was Jerome Levitch, the son of Russian Jewish parents. He was born in New Jersey. He will be greatly missed.

Changing the subject to one just as sad...

I refer to neo-Nazis. Thank goodness #45's grandchildren are Jewish. The fact that his son-in-law and daughter are also Jewish allows me a little comfort... but not much!

My mom was born in Montreal, Canada, her parents having fled the Ukraine because of the pogroms. My dad, whose ancestry was Russian and Polish, was born in New York. His ancestors also fled pogroms.

I say "how lucky" because I wasn't put to death for being Jewish but, as a little girl of 5 and 6, living on welfare in the Red Hook projects in Brooklyn, I was beaten up for being Jewish, so badly that I decided to learn my "Hail Mary's" and an "Our Father" and say I was Catholic so the beatings would stop.

After WWII, when I learned of the Holocaust and what happened to millions of our people, I felt guilty and pushed my Jewish denial out of my mind... or so I thought.

I grew up, married and gave birth to our first son in Brooklyn at Beth El Hospital. The gal in the next bed was dressed and getting ready to leave. I gave birth the night before and was still in sleep mode when she looked at the foot of my bed and saw the letters H E B. "What does that stand for?" she asked. "Hebrew, I guess," was my response. "You can't be Jewish," she said, "you've been reciting "Hail Mary, mother of God, full of grace" all night!

It took six weeks of visits to a psychiatrist to remember what happened when I was little.

On to something more pleasant...

I read this in a Jewish Pavilion newsletter and pass it along to you:

"JUDY APPLETON has been working as a program director for the Jewish Pavilion since 2010 in the Oviedo, Winter Springs, Winter Park and Avalon Park areas.

Judy is known for giving wonderful holiday parties that include beautiful décor and festive celebrations. She is a beloved member of the staff who has excellent relationships with her volunteers, staff at facilities and Jewish Pavilion personnel."

(Knowing Judy since she was a little girl, her beautiful mom, Helen, and wonderful dad, Larry, I am not surprised. Judy was just the cutest, nicest child who grew up with the same qualities!)

There is a 400-page hardcover book/in depth, in detail, in color that is now available at

It is titled "My Story," and shares 41 people's private experiences with the very beloved and respected Lubavitcher Rebbe, Menachem Mendel Schneerson.

We lost a wonderful member of our community...

The Heritage News recently noted a Facebook post from PEARL HALIKMAN, about her dear departed brother-in-law, Stanley Weinroth. I pass it along:

"To all of our family and friends, It took me about a week to finally be able to express our pain with the loss of my dear brother-in-law, Stanley Weinroth.

He passed on Wednesday, Aug. 9th in a car accident. My sister LUCIKA WEINROTH, is leaving the hospital tomorrow (she already has) to a rehabilitation facility and God willing, to a full recovery. She thanks everyone for the prayers and good wishes.

Stanley was buried on Sunday morning, next to our mother, Augusta Krutman."

(I had the pleasure of knowing Stanley. He was such a wonderful man. A man of many superb accomplishments, a man who always gave me a smile and made me feel special. I will always remember him.)

JOSH DOBBS, a waiter at the Bagel King restaurant in Casselberry Commons, is the nicest, most professional at his job, and the most polite. I love when I am sitting in his section!

(And he's good-looking too!)

Judith is very worried. She believes that her 16-year-old daughter Talya is having sex and therefore might get pregnant. So Judith goes to see Doctor Myers. 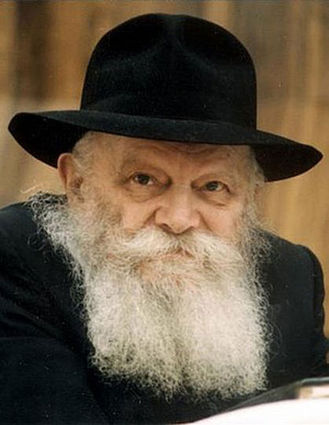 Doctor Myers tells her that teenagers today are very headstrong and any attempt to stop Talya could easily result in rebellion. And such a mother-daughter rift is something to be avoided.

"I have a suggestion to make," replies Doctor Myers. "Put Talya on a birth control program. But first of all talk to her, and then give her a packet of condoms."

So that evening, as Talya is getting ready to go out on her date, Judith tells her about the situation as she sees it and then hands a packet of condoms to her.

Talya instantly bursts out with laughter. "Oh mom, have you got it wrong," she says, hugging her. "You really don't have to worry about me getting pregnant. I'm dating Rivkah."