'The Profound Effect' art exhibit opens at the Holocaust Center 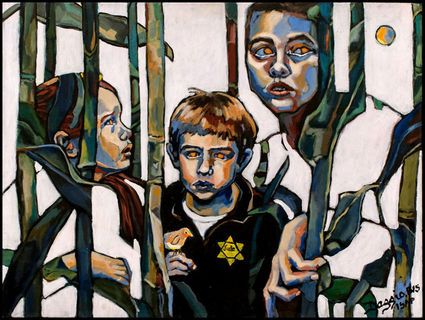 "Fear of the Children."

There is a hauntingly solemn-yes not to be missed-art exhibit opening at the Holocaust Memorial Resource and Education Center on Sept. 10. The works were created by St. Petersburg artist Judith Dazzio.

What makes this exhibit so unique is that Dazzio painted these pieces as a result of hearing a Holocaust Survivor's personal story in her sixth-grade class. Her story stayed with Dazzio throughout her life. An adult now, she recalls, "I can still see the numbers on her arms. I can see her holding up those faded pictures of her children that had been killed, and remember how she started crying when she talked about them."

Dazzio doesn't remember the woman's name, nor has she been able to find out who she was, but as a 12-year-old schoolgirl, Dazzio made a promise: one day, she was going to honor the extraordinary woman, as well as the woman's children and all of the children lost or "bear the scars of having to live through that time."

Dazzio began this Holocaust art series 10 years ago. Basing many of the paintings on the woman's story, they are limited to the Warsaw ghetto and Birkenau.

In addition to the art exhibit, Dazzio has created a book of the 22 paintings in the Holocaust artwork series, along with explanations about each painting. Titled "The Profound Effect of a Holocaust Survivor on a 12-year-old Protestant Schoolgirl," Dazzio dedicated the book to Tess Wise, the founder of the Holocaust Center, after she heard Wise's own story of survival. 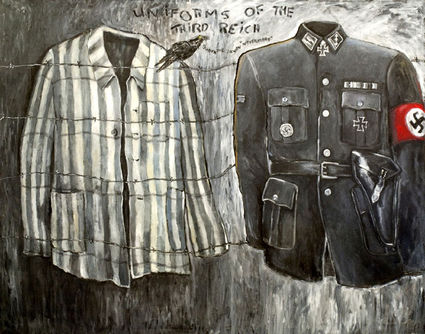 Featured at the exhibit will be "Two Uniforms." Notice the raven.

Explaining why she chose to honor Wise, Dazzio explained that in her own opinion, Wise's greatest achievement was her influence on school children about the Holocaust.

The Profound Effect visually represents the testimony of this Holocaust Survivor through intense color and vivid, deeply emotional imagery. Equal parts beautiful and haunting, this exhibit will have a "profound effect" on everyone.

The exhibit will be on display at the Holocaust Center from Sept. 10 through Dec. 31.

Copies of the book will be available for sale.