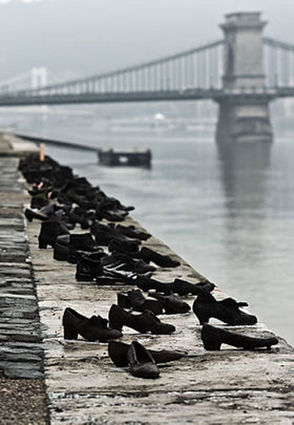 The shoe memorial along the Danube River.

As we are in the midst of the Jewish High Holidays, I can't help but remember where my husband and I were last year at this time. We had embarked on a Gate 1 Travel guided tour of Central and Eastern Europe visiting four countries. This trip began in Budapest, Hungary, then we traveled by bus to Vienna, Austria; Prague, Czech Republic; and ended in Berlin, Germany. From there we added a week on our own in Paris.

In my usual fashion, I made it a point to visit the Jewish communities, former ghettos, and of course the beautiful synagogues in all of our destinations. My other goal was to learn more about the great classical music composers who were so prominent in these countries. To do this, I made sure that we joined our travel group for the morning city tours, but had our afternoons free for our own personal travel. When traveling to new destinations, I find that escorted tours work well for us and then we can always return on our own to places we fall in love with.

Our knowledgeable tour guide, Bogdan, was from Warsaw, Poland, where our tour group actually began, but we joined the group in Budapest. We found that city so lovely and actually discovered the Jewish neighborhood near our lovely hotel on our very first night there. A gorgeous huge Moorish designed synagogue with ornate domes was all lit up in bright gold. It was mesmerizing. The next day on our city tour, we learned that it was the famous Dohany Street Synagogue (largest in Europe), which opened in 1859 and was located in what was the Jewish Ghetto. Franz Liszt played the organ at the opening ceremony. On the premises there was a beautiful Tree of Life and a Jewish Museum that housed cabinets of candle sticks, Jewish prayer books, and other religious items left behind during the Holocaust. There was also a small cemetery with a very sad history: Black and white photos showed that so many Jews died from starvation in the ghetto during the harsh winter that their corpses were piled on top of each other until they could be buried.

A short distance away was the Danube River where we had a private River Boat dinner cruise which passed by the stunning Parliament Building and Performing Arts Center. On the return bus ride to our hotel, we passed the shoe memorial along the river where an artist created bronze shoes in remembrance of the people who were shot into the Danube by Arrow-Cross militiamen during the war.

I had known that Europe was highly populated by Jews before WWII, but for some reason I wasn't expecting to see so many memorials outside of the concentration camps and cemeteries. I also wasn't prepared to see the pianos belonging to Beethoven, Mozart and Liszt (the composers of my favorite piano pieces I have played since childhood). In the Budapest National Museum, I got so emotional that I couldn't stop crying in the glass enclosed Beethoven exhibit with his music playing. I learned that Beethoven bequeathed his piano to Mozart upon his death.

Being that Hungary was just our first country on the itinerary, I knew this was becoming a rather emotional but important trip for my understanding of history. Our final morning in Budapest, we walked to Mozart's apartment and happened upon a piano and vocal concert as part of the admission. What a fabulous experience sitting in Mozart's living room and listening to this performance. Afterward, we rushed back to our tour bus and were on our way to Vienna, which included a Viennese concert that evening.

I so loved the ornate summer and winter palaces in Vienna and all the wonderful cafes, parks, and shops to visit. Best of all was the Vienna Opera House in all its glory where we took a private tour. But alas, Rosh Hashanah was fast approaching. We were a bit apprehensive about attending services in Europe with the terrorism threats, but were determined to go anyway. Luckily, a Chicago relative who was born in Vienna gave me his friend's name as a contact. As it turned out, he was the gabbai (rabbi's assistant) of the Stadttempel (City Temple), the main synagogue of Vienna, which opened in 1826. When I told Bogdan that we were going there for services, he said we wouldn't be able to get in, but we tried anyway.

We nervously left our hotel, found the subway station and took the comfortable modern train to the Jewish neighborhood. We had no trouble finding this synagogue because as soon as we turned off the main street, there were Polizia with machine guns guarding at each end of the block. The entire street was blocked off from traffic, but I still didn't see the synagogue. That is because it was the only one left after the war. Hitler never found it since the front appears to be an apartment building. We came upon an entrance that had five people outside asking for credentials. One man interrogated me for five minutes asking if I was Jewish, if my mom was Jewish, what was the name of my synagogue and rabbi and we had to show him our passports. Upon giving him a letter showing my membership at Beth Am and telling him we were guests of their gabbai, we were admitted.

After hanging up our coats in a huge foyer, my husband, Scott, followed a man into the main sanctuary where the men sit and I was escorted up a narrow spiral staircase to the balcony for the women. I sat next to a lovely young woman who was bilingual and helped me as the service and prayer books were not only all in Hebrew, but German as well. The sanctuary was gorgeous with a circular blue dome ceiling, which you would never know from the outside.

The next day, I googled Stadttempel and learned its history, which included a bombing at a bar mitzvah in the 80s. That helped explain the high security and why we were told it was next to impossible to visit as an outsider. Our tour guide was quite impressed with our adventure.

Driving to the other countries, we visited Bratislava, Slovakia; Cesky Krumlov, Czech Republic; and Dresden, Germany, where we saw more Jewish memorials. In Prague, we visited the Jewish Quarter, which dates from the 13th century and has the oldest preserved synagogue in central Europe along with a Sephardic one and four others that are on the Jewish Quarter Walking Tour. The old Jewish cemetery with the tombstones all thrown together was quite eerie. Evidently, Adolf Hitler decided to leave the area alone as a "museum of an extinct race."

In Berlin, just south of the Brandenburg Gate, we visited the huge outdoor Holocaust Memorial that opened in 2005 and consisted of vertical cement slabs reminiscent of headstones that you can walk through. 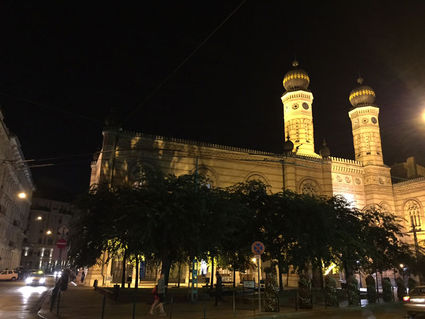 The highlight for me in Paris was the Paris Opera House with its ornate walls and ceilings of gilded gold and art. The grand staircase was where the Parisians, still to this day, went to be seen. When the tour guide showed us where the Phantom of the Opera sat in the balcony and asked if anyone knew how he would appear and disappear, my hand was the only one up. She was impressed that I knew it was a secret passageway in the pillar to the basement.

Our European tour certainly met my expectations and more. My mother, who was my piano teacher for many years and left me her Steinway grand piano, would have been impressed. I also gained a better understanding of World War II and the migration of the Jews from Europe. All in all, it was another trip to be treasured.

She is a member of Congregation Beth Am, Hadassah, and The Jewish Pavillion.