'Submission'-A book that is shaking public opinion in Europe 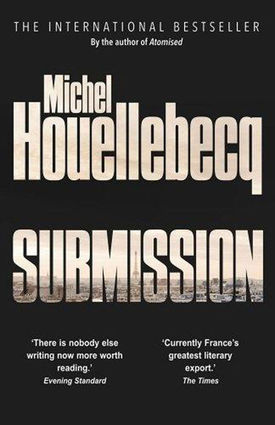 Few books in the last decade have aroused the controversy and public debate, at least in Europe, as Michel Houellebecq's "Submission." Still at the top of the charts in France, the novel, "Soumission" in its original French, has now conquered Germany, shooting to the top of the charts in its first week in shops, with more than a quarter of a million copies now in print in German.

The novel, which drew controversy over its topic even before publication, was released in France on Jan. 7, the day on which 12 people were killed by gunmen at satirical magazine Charlie Hebdo, including Houellebecq's friend, Bernard Maris. It sold 120,000 copies in its first five days on sale in France.

The fictional tale of a submissive intellectual class willing to trade more than a thousand years of Christian and national patriotic traditions of the nation-state-as well as fundamental values of Western civilization, including the right to an education free from religious dogma, and equality of the sexes-for an Islamist regime in partnership with the traditional "socialist parties" of Europe. This apparently contradictory scenario (by American standards) is all too real in much of Europe.‬

‪Once in power, the new regime, dominated by the same Muslim Brotherhood which President Obama favored until it was overthrown by massive demonstrations in Egypt, introduces obligations upon women to wear the veil in public, withdraw from public life, accept polygymy and end any openly secular public education or teaching by non-Muslims.‬

‪I happened to finish reading the book in a few sittings just a few days after watching two films that left me with a profound unease over how often Diaspora Jewish "idealists" and "patriots," to paraphrase Lenin's dictum, "Will sell us the rope with which we will hang them."‬

‪These two very recent films deal with the assassinations of the Archduke Franz Ferdinand that provoked the First World War in 1914 and Leon Trotsky in Mexico in 1940. Both dwell at length on two Jewish characters. In reality, both of them played a major role in the events which, almost certainly, would have taken a very different course and altered world history had these two characters been anybody else.‬

‪These are the conclusions that viewers are left with to ponder and speak volumes on the nature of the Jewish Diaspora mode of existence for highly educated, ethical and politically "liberal" individual Jews today who are/were hostile, apathetic or simply ignorant about the reality of Zionism then or Israel today.‬

‪The films are "The Chosen" (El Elegido), 2016, produced on site in Mexico and "Sarajevo" (Das Attentat), an historical drama by Austrian director Andreas Prochaska, produced in 2014 by both German and Austrian television in order to coincide with the 100th anniversary of the outbreak of World War I.‬

"Sarajevo" focuses on Leo Pfeffer, the examining magistrate, appointed to handle the investigation. Pfeffer is outraged at the apparent gross incompetence of the local authorities in not preparing adequate security measures for the visit of the Archduke Ferdinand on his state visit to Sarajevo. Pfeffer is a brilliant and highly motivated, competent investigator but he must tread carefully; he is Jewish and any failure to satisfy the higher authorities in Vienna will cost him dearly, probably ending his career‬.

‪He knows he is under a deadline to complete his investigation and duly find the culprits among the Serbian government and ultra-nationalist Serbian or Pan-Slavic organizations given moral, financial, material and technical support in Belgrade.

‪His situation is made all the more tenuous by a love affair with Marija Jeftanovic, the married daughter of a wealthy and prominent local ethnic-Serbian land owner in Bosnia, who has prospered through sale of agricultural products. Pfeffer is a Hungarian-Croatian Jew and has converted to Christianity to further his career. He is generally regarded with suspicion, scorn or contempt by many of those in the army and civilian administration in Austrian-occupied Bosnia-Herzegovina with its substantial Muslim population. Marija's situation as a married woman and a suffragist only make Pfeffer's situation more precarious due to what is regarded as flouting traditional morality.‬

In "The Chosen," Sylvia Agaloff is a devoted Brooklyn Jewish communist and social worker who came to Mexico to work for her devoted idol, Leon Trotsky. She is exploited by Ramón Mercader, a dedicated Soviet agent educated by his fanatical communist mother in Spain, to make any sacrifice, including giving his life to serve Stalin. He is taught to ignore every human emotion of compassion and decency. Mercader is even tested by willingly killing his favorite pet dog on command from the NKVD.‬

‪NKVD agent Leonid Eitingon, who operated in Spain, had a long running love affair with Mercader's mother. He trained Mercader in Moscow in 1937 in the ways of espionage and guerrilla warfare and was the brains behind the assassination.‬

‪He chose Agaloff and correctly believed she would be attending a secret conference of Trotsky's Fourth International (about which the NKVD had been tipped off) in France in the summer of 1938.‬

‪Agaloff, a very naïve and easily fooled woman in Trotsky's last refuge in Mexico, gives Mercader access. Like Pfeffer, she is not a minor character. She provides the key through her infatuation and misplaced Jewish idealism. Out of a sense of pity, Trotsky's bodyguards grant her the favor of being with her lover inside the compound on special occasions. Sympathy for Agaloff's chance at a love relationship overcomes their logic. She is not particularly attractive, and Trotsky and his camp guards developed a special fondness for her.‬

‪Her repayment is the cruelest blow any jilted woman can face-betrayal. Not for another woman but for Stalin! She unwittingly becomes an accomplice to the murder of her beloved Trotsky, leader of the idealistic cause she was devoted to. ‬

‪Would events have transpired differently if Agaloff and Pfeffer had not been Jewish? This is a matter of conjecture but the list of misplaced Jewish idealism for remote non-Jewish causes, leaders, and nations is a very long one.‬

‪Reading "Submission," one is struck by memories of the fascist anti-Semitic Vichy regime in France and the fate of the Jews, notably the many Diaspora idealists who rejected Zionism as too provincial, and believed that their fate was inevitably tied with the success of some grand universalist ideology such as communism or believed that their date depended on complete identification with the culture and national ideals of their adopted homelands.‬

‪The book's main protagonist, Francois, is a university professor, a nominal Catholic, but actually, a typical agnostic academic and opportunist obsessed with his favorite pastimes-writing, food, wine, tobacco and sex. He receives a letter from his former, much younger, Jewish girlfriend, Myriam, who has reluctantly followed her parents to Israel. Her parents, well aware of what happened in Vichy and the dangers they cannot prevent, make the decision for her to start a new life in Israel.‬

‪Myriam has repeatedly told Francois that she is devastated because she feels so thoroughly French and has always been devoted to France and French culture but after six months, she writes to him that she is entranced by the vibrancy of Israel and its people who live life to the fullest and are unafraid of the multiple dangers surrounding them. This only increases his anguish and pessimism over what he faces in an Islamist France.‬

‪Francois feels the loss of his country and way of life all the more intensely because, as he reluctantly answers her, "...There is no Israel for me."

‪Later, he convinces himself that he can nevertheless live a more comfortable life if he simply goes with the flow and reaches the convenient choice that what he gains is much more important at his stage of life than what he stood to lose by resisting. To many of their contemporaries, fellow comrades and superiors, Pfeffer was one of many "Moishes" in the Diaspora of the last two thousand years, competent and skilled but unable or unwilling to take final responsibility for a decision that could only have been taken by embracing their Jewish identity.‬

‪What we know for sure is that Pfeffer followed a time-honored strategy of many assimilationist-oriented Jews in Europe who converted to Christianity to protect their career. Sylvia, who came from a predominantly Jewish environment in Brooklyn, simply blindly ignored her background in an attempt to identify with what she considered a much larger cause that would benefit all of humanity. In so doing, both of them tried the patience and "tolerance" of their superiors who either doubted their effectiveness (Pfeffer) or made costly allowances for it (Agaloff).‬

‪Myriam, pushed by her parents, took the plunge and came to realize where she belonged without apology. She avoided the dilemmas, contempt or pity that would have been her lot by remaining in a Muslim majority France. She made the right choice, leaving Francois to self-pity and envying her sense of fulfillment in Israel.‬