I received this letter...

"As the Jewish year 5777 comes to an end, we must dig deep to find optimism for world Jewry in the coming year," is how it began. It was from RONALD S. LAUDER, President, World Jewish Congress. I think it is important and thought provoking enough to pass it along to you (in part):

"Thanks to you (meaning all of us), despite having another difficult and tumultuous year, the Jewish people moved forward with unity, strength and great resolve. As troubling as this past year was, it could have been far worse had it not been for the vigilance of WJC supporters like you.

At the same time, we cannot forget that in countries like France, Hungary, Great Britain, Canada and even the United States, anti-Semitism, hatred, intolerance and violence are on the rise and must be confronted. As Jews, we cannot sit idly by as those who wish to do us harm plot and scheme and recruit others to perpetrate brutal acts of terror. Not now...when anti-Semitism has reached unprecedented levels in countries and communities where such incidents were once considered unimaginable.

Not now... When Jews in far too many corners of the world are considering leaving their home countries out of fear for their personal safety.

Not now... when far right and anti-Semitic political parties have become competitive in many nations around the world, particularly in Europe. And not now... when online hate and anti-Semitism are growing and spreading exponentially... inciting disaffected young people and others to commit acts of hatred, bigotry, violence and terror.

As Jews, we know that throughout history, difficult economic and social conditions have given rise to extremists who make promises of a better future while hiding their real agenda, one that promotes hate and bigotry."

The Sears department stores removed from their sales website sweatshirts and t-shirts emblazoned with the slogan "Free Palestine, End Israeli Occupation" and featuring a fist in the colors of the Palestinian flag.

A Sears representative told the WJC that the company committed to immediately pulling the shirts, which were available for sale on Sears.com through third-party seller Spreadshirt.com.

What we need now is laughter...

I wrote about the JCC Laughter Club before but it should be written about again, especially as the world news is getting more upsetting.

The Laughter Club takes place in the Group Exercise Studio of The Roth Family JCC in Maitland at 12:15 p.m. It is free for JCC members and it can really help to reduce stress!

(Laughter is healthy, yes it is... I laugh every day when I look in the mirror. No comments, please!)

On Monday, Oct. 9th, the JCC 39ers will be treated to a video, "A story of Guatemala," presented by SUSAN BERNSTEIN. It will be followed, as usual, by refreshments. (Hope to see you there.)

On Sunday, Oct. 29th, CHRIS ROTTMAYER, super-talent that he is, will bring back his salute to the Modern Jazz Quartet.

How I wish I could speak Yiddish...

Volunteer Yiddish instructor, Joan Pohl, can be found surrounded by a crowd of students at Oakmonte Village: Valencia eager to practice the Yiddish language during the one hour class. Pohl's class brings a taste of the Yiddish culture and language to more than 20 students who attend the monthly offering. Pohl, a retired speech pathologist, welcomes students of all faith, all ages, and of all backgrounds.

There will also be another Yiddish class sponsored by the Jewish Pavilion starting on Thursday, Oct. 19th at 10:30 a.m. and continuing every third Thursday. This takes place at Brookdale Island Lake, 160 Islander Circle, Longwood. 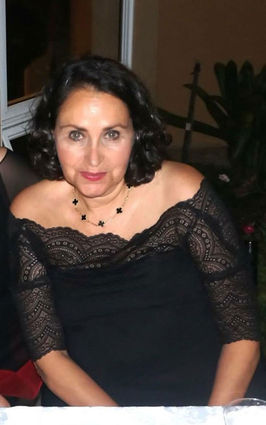 Volunteer Yiddish instructor, Elliot Davis, PhD, is fluent in Yiddish and offers an interactive class with stories, memories and Yiddish expressions so many share. Coffee and refreshments will be served, of course!

Freda is getting worried. Her husband Bernie walked out of their house earlier that day and hasn't returned.

At 9 p.m. she goes to her local police station to report a missing person.

While she's giving details to the officer in charge, she gives him a photo of Bernie and says, "When you find him, could you please tell him that my mother didn't come after all. She decided she would stay the week at my brother's house instead."