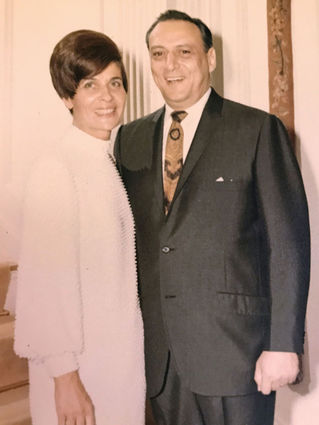 What better way to memorialize those who have loved and nurtured the arts than by naming a musical festival in their honor? Those were the thoughts of Jewish Pavilion Board member Geanne Share when she and husband, Adrian, chose to pass on the legacy of her parents, the late Inez 'Teddy' and Myron Snyder. With the arts and philanthropy at the center of Share's Brookline, Massachusetts home, she credits her parents for inspiring her life of volunteerism, with training given "while practically still in the womb."

The Share family will pass on the Snyder's love and cultivation of the arts by honoring them at the Jewish Pavilion's Annual Fall Festival, "Music Fest 2017." The event will take on Oct. 15th at Lake Brantley High Schools' auditorium in Altamonte Springs and will feature local super-talents including Carol Stein, Michael and Ben Kramer, Barbara Jones, Cantor Jacqueline Rawiszer, Penny D'Agostino, Walter "Sky" Goldstein, and Paul Stenzler. Vendors and sponsors will be exhibiting in the Lake Brantley cafeteria, adjacent to the auditorium before, during the intermission, and after the concert.

Share noted, "Giving was at the heart of who my parents were. Together, they founded the Association of Performing Arts supporting the ballet, flamenco, opera, theatre, rock, and other performing arts organizations in Boston. The Association brought free performances to the steps of Boston's City Hall, and honored legendary performers like Arthur Fiedler of the Boston Pops and Gunther Schuller, an American jazz composer and musician, with the "Teddy" Award. 'Teddy' founded the Northeast Chapter of Hadassah and was president of the women's auxiliary of Jewish Memorial Hospital."

Geanne added, "Most importantly, my parents taught us to be open to all people and to keep an open ear-to listen."

Share has done her parents proud, and serves not only on the Jewish Pavilion Board, but has also served on a host of other nonprofit boards including the Jewish Federation of Greater Orlando, Temple Israel, the Orlando Ballet, the Kinneret Apartments and Council on Aging, and the Morning Star School.

The honoree couple first crossed paths during World War ll, when they both served in the Army's Criminal Intelligence Agency in Fort Reilly, Kansas. The happy couple of 52 years married in 1945, settling in the Boston area where they raised Share and her two older brothers, Robert and Paul. Myron made his living as a meat broker and in real estate. He served the community in many ways including serving as president of B'nai Brith and the Market Lodge. He was also a member of the Free Masons. Additionally, Myron oversaw the building of the temple and high school in Hull, Massachusetts. Teddy was an active volunteer and community philanthropist, who also earned a double master's degree from Boston College.

Growing up in a loving and bustling household, Share made it a point to reach out to the elderly and those in need when she was just a middle-school student. The lifetime volunteer became interested in spending time with seniors under her parent's influence, serving as a candy striper at Jewish Memorial Hospital. Even then, she connected with seniors through the arts, bringing Frank Sinatra records and engaging the patients in movement, dance, and three-dimensional art.

After Share's father passed in 1998 and her mother relocated to Orlando, the two volunteered together, serving as Kinneret Angels. Share recalls that it was her mother who introduced her to the Jewish Pavilion, attending a volunteer luncheon together. Share considered her mother to be her best friend, the two experiencing nearly everything together, including surviving breast cancer just one year apart. Teddy encouraged her daughter to join a clinical trial for her rare variant of breast cancer. Share attributes her positive outcome and cancer-free living for the past eight years to sage motherly advice.

With Teddy passing away last year, Share's desire to bring the arts and philanthropy to the community is greater than ever. She often thinks of her mom at a Pavilion event. When she joins hands with a senior to dance, or just to move and sway, she notes the importance of touch and its healing properties.

Musical entertainer and Jewish Pavilion program director Walter "Skye" Goldstein, said he will be performing the Irving Berlin ballad, "Always," which was Teddy's and Myron's special song, and never failed to bring a tear to the eyes of Teddy while a resident of Orlando's Kinneret Apartments. Share noted the lyrics represented a lifetime of love for her parents, and now move her to tears, as well.