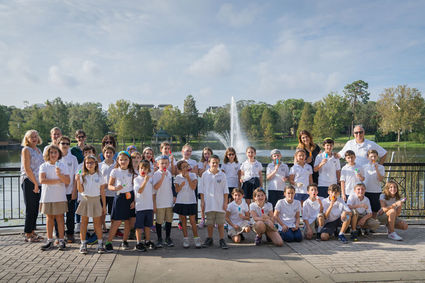 Jewish Academy students cast their sins away in Tashlich services. The third through fifth graders walked to Lake Lily to participate in a Tashlich service. Students gathered in a circle, listened to the shofar, sang and then symbolically threw away their misdeeds to begin the New Year renewed. In addition to the students and teachers, many of the Jewish Academy's parents joined in this meaningful program.

Robyn Eichenholz, JAO parent, said, "it was very significant to me to participate in Tashlich. I love celebrating holidays with the Jewish Academy and being with my daughter's class."

After Tashlich, the students cleaned up the park as part of mitzvot. They were very eager to do this good deed.

The younger students were not forgotten. Kindergartners through second graders walked to a pond on campus to do their version of Tashlich.

Participating in Jewish customs and ceremonies is at the core of the Jewish Academy of Orlando's mission-to instill a love of Jewish values and traditions in their students, ensuring a strong Jewish future for their families and our community.

For more information or to arrange a visit to the school, please contact Amy Polacek, Admissions coordinator, at apolacek@myjao.org or 407-647-0713.