COS Men's Club held a joyous celebration for Howard Kaplan 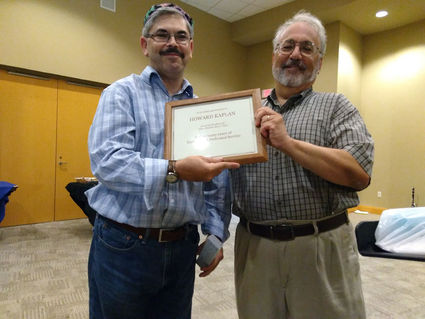 Congregation Ohev Shalom's Men's Club celebrated the holiday of Sukkot with fun, food, music and fellowship by holding an event titled "A Celebration and So Long in the Sukkah," held on Sunday, Oct. 8, at Congregation Ohev Shalom. The family-styled event was open to all congregation members and the community as a way to celebrate the holiday and to help everyone perform God's commandment to be joyous during Sukkot. It was also a great time to give best wishes to Howard Kaplan, COS Men's Club's past co-president and his family, as they prepare to move to Birmingham, Alabama.

About 40 people came, including young people, singles, couples, seniors, and members of at least three different synagogues. Also in attendance were several Boy Scout leaders, including the current president of Temple Israel, who came out to honor Kaplan, his long-time friend. Ed Danuff, president of Congregation Ohev Shalom, was also in attendance to help celebrate.

The program began with Hatikvah, played by a seven-member music group led by Robert Kaplan, son of the honoree and a graduate of Ohev's religious school and youth groups, and frequent participant in COS's weekly Shabbat services. His group played an outstanding combination of Klezmer and Jewish music throughout the event.

Bruce Hoffen, COS Men's Club vice president of Membership, talked about how to help those in Puerto Rico whose lives have been ripped apart by Hurricane Maria. Desi Rotenberg, vice president of Social Action previewed a 1.8k (Chai) walkathon event in the planning stages, scheduled for Dec. 3rd that is intended to promote several causes, volunteerism and temple committees.

Alan Rusonik, Head of the Jewish Academy of Orlando and a COS Men's Club Board member, presented a Midrashic learning on the meaning of the Lulav and Etrog. Rusonik then helped people in the Sukkah shake the Lulav and Etrog, one-on-one. Those who remained indoors listened to live music and to kibbitz. A couple of the "wilder" ladies of Ohev Shalom came forward to dance to the Klezmer! 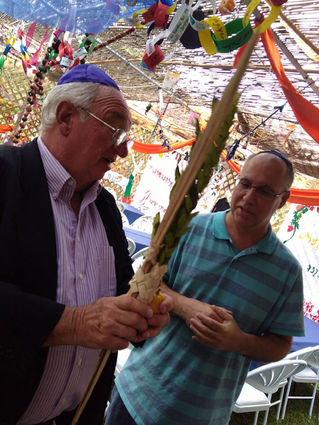 Alan Rusonik, (r) coaches Jerry Leibman on the mitzvah of Lulav and Etrog.

Following Robert Kaplan's rendition of the "camp" version of the Motzi, attendees were treated to a wonderful buffet dinner of baked salmon, kugel, vegetables, fruit, all prepared by three of Men's Club members. Dinner was followed by a moving presentation for Howard Kaplan. Bart Neuman, who shared COS Men's Club presidency with Kaplan for the last two years, recognized Kaplan's well-known traits of always being positive, and truly being willing to do anything to help anyone. Kaplan was presented with a beautiful mezuzah made of Jerusalem stone for the Kaplan's new home in Alabama. He also received a framed certificate, stating: "In grateful appreciation to Howard Kaplan from his brothers at Ohev Shalom Men's Club for his many years of tireless and dedicated service."

The event ended with cake and coffee dessert and more music.